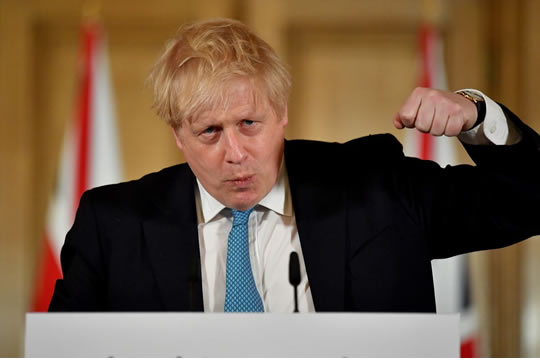 The PM “can see how” progress will be made against COVID-19, but can’t be “certain” of a “downward slope” by the end of June.

Boris Johnson has said the UK “can turn the tide” against coronavirus in the next 12 weeks – but subsequently admitted the government “don’t know how long” the crisis will last for.

Speaking at a Downing Street news conference, the prime minister revealed the government is in talks to buy “hundreds of thousands” of tests to reveal if people are immune.

He also said the first British patient had been put in a randomised trial for a treatment for COVID-19.

Mr Johnson thanked Britons for their “huge efforts” in complying with government advice on stopping the spread of the disease.

He said: “We’re asking students to put their education on hold, we’re asking people not to socialise in the normal way and already we can see the impact this is having on the UK economy and on business, on great, great companies.

“So it’s vital that we in government stand behind them when what we are asking everyone to do is so crucial for saving literally thousands of lives by fighting this virus.”

Quizzed by Sky News political editor Beth Rigby over his 12-week assessment – and whether he was saying UK life could return to normal by the summer – Mr Johnson said: “I am very confident that we’ll get this thing done.

“I am very confident that we’ll beat coronavirus.

“I think we can turn the tide within the next 12 weeks, but it depends on collective, resolute action.

“The encouraging thing is the more disciplined we can all be in doing that, the greater the chances the scientific community will be able soon to come up with fantastic results on testing to say nothing of the other medical treatments.” Coronavirus UK tracker: How many cases are in your area

However, later asked what he meant by “turning the tide”, the prime minister admitted the government “don’t know how long” the coronavirus outbreak will last for.

“At the moment, the disease is proceeding in a way that does not seem yet to be responding to our interventions,” he said.

“I believe a combination of the measures that we’re asking the public to take and better testing, scientific progress, will enable us to get on top of it within the next 12 weeks and turn the tide.

“Now, I cannot stand here and tell you by the end of June we will be on the downward slope.

“It’s possible, but I simply can’t say that’s for certain. Of course not.

“But what I can say is this is going to be finite, we will turn the tide and I can see how to do it within the next 12 weeks.”

Mr Johnson then added: “I’m often accused of being unnecessarily boosterish about things and I certainly don’t want to strike that note today.”

The prime minister said the UK was “rapidly becoming so much better” at understanding coronavirus, including about the medicines that may treat and cure it.

“We are in negotiations today to buy a so-called antibody test, as simple as a pregnancy test, that could tell whether you have had the disease.

“It’s early days, but if it works as its proponents claim, then we will buy literally hundreds of thousands of these kits as soon as practicable because obviously it has the potential to be a total gamechanger.

Mr Johnson said the UK was aiming to ramp up testing for coronavirus to 250,000 people a day.

He called on Britons to be “reasonable” in their grocery shopping, amid stockpiling that has left supermarket aisles empty of certain products, adding: “Be considerate and thoughtful for others as you do it.”

He also urged companies to “think very carefully” before laying off staff, as firms come under intense pressure due to the accompanying economic crisis.

“You’re going to hear more tomorrow about what we’re going to do to support employees,” Mr Johnson promised.

A Conversation with H.E. Hon. Uhuru Kenyatta, President of the Republic of Kenya