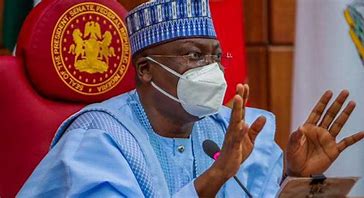 The Senate had last week while considering the Electoral Act Amendment Bill, voted that “The Independent National Electoral Commission (INEC) may consider electronic transmission of results, provided the national coverage is adjudged to be adequate and secure by the National Communications Commission (NCC) and approved by the National Assembly.”

Lawan who spoke with newsmen at the weekend while on a constituency visit to his Yobe North Senatorial District said it was wrong to conclude that Senators who voted for electronic transmission with conditions did not like the results transmitted electronically.

He said the votes cast on either side of the subject matter cut across party lines and regional divides.

“All of us in the Senate, 109 of us, believe that at one point, our electoral process must deploy electronic transmission so that it eases and enhances the electoral process and give it more credibility and integrity.

“But you see, when you have not reached that stage where you could deploy the electronic transmission from every part of the country, then you have to be very careful. And no matter what anybody may say, you cannot have about 50 percent of Nigerian voters not participating or not getting their votes counted in elections and say it doesn’t matter, that we have to start the electronic transmission.

The member representing Sagamu/Ikenne/Remo North federal constituency in the National Assembly, Otunba Adewunmi Onanuga has said Nigeria ought to be putting in place the necessary infrastructure that would allow electronic transmission of results workable rather than first demanding for a law.

Speaking with newsmen in Sagamu, Ogun State, during campaigns for council poll at the weekend, Onanuga expressed doubt over the preparedness of Nigeria for effective transmission of election results electronically.

“For me, it’s like we are trying to jump the gun. We want to copy the democracy of over 100 years, within our 21 years of democracy. We need to take it slow and make sure we have a good background and good foundation to build on before we jump into electronic transmission of results.

“It is not a bad thing. It is a good thing, but are we ready for it? Yes, if it is in the Electoral Act, we will probably work towards it, but then, we always work towards the answers. We must have all it takes before we say we want to have a law to back it up,” he said.

Why I walked out — Sen. Moro

The Senator representing Benue South Senatorial District, Comrade Abba Moro, has explained why he walked out during plenary after voting for clause 52(3).

In a statement yesterday by his Media aide, Godwin Ameh, Senator Moro said, “However, along the line, some members of the APC, in the Red Chamber in an attempt to distort laid down principles of plenary procedure, revisited an issue that had already been voted upon and put to rest.

“Having observed the body language of some of his colleagues in the ruling party who had their own hidden agenda of passing that obnoxious clause of amending the clause 52 (3), the distinguished senator could not in good conscience, sit and watch the brazen abuse of parliamentary procedure. At that point, he decidedly walked out of the chamber.

“It is instructive to note that Senator Abba Moro was actively involved in the meetings and deliberations that preceded the debate on the floor of the Senate and eventual voting on the bill.”