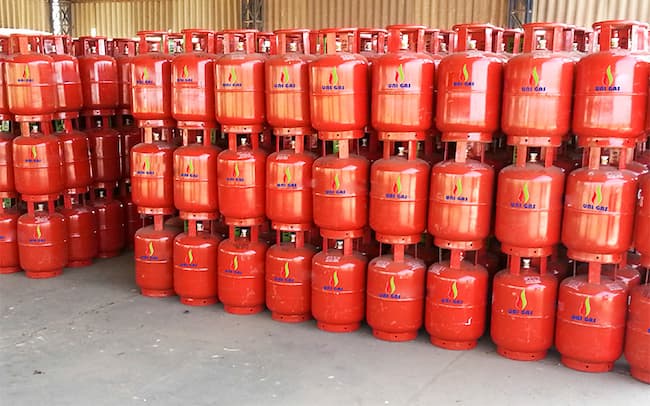 Data obtained from the Petroleum Products Pricing Regulatory Agency (PPPRA) showed that only 85,066.55 metric tonnes of the product were made available in September as against 123,029.79 MT in July this year.

The shortfall in supply from importers of the commodity has pushed up the price of cooking gas by over 100 percent in the past eight months.

The price of cooking gas has been on a steady rise this year on the back of the devaluation of naira as more than 50 percent of the product is imported into the country.

In May, the Central Bank of Nigeria (CBN) devalued the naira as it adopted the NAFEX exchange rate of N410.25 per dollar as its official exchange rate. The naira traded at 545/$1 at the parallel market on Thursday.

The PPPRA data showed that the LPG supplied for consumption in September was imported from two countries despite the huge gas reserves in the country.

Nigeria, which ranks as the ninth-largest natural gas reserve globally, imported 33,219.461 MT of cooking gas from the United States and Equatorial Guinea in September.

Data obtained by BizWatch Nigeria from PPPRA showed that this represents 39 percent of the total gas of 85,066.55 MT supplied to consumers in the country in August.

Meanwhile, about due to the persistent shortfall and huge demand for the product, producers have increased their production quota.

According to the company, in order to achieve its aspiration for domestic supply, a dedicated 13,000MT vessel, LPG Alfred Temile, delivers the product to the market through Lagos and Port Harcourt terminals.

It said, “The vessel’s delivery to these terminals are occasionally hampered by challenges at the terminal, including storage capacity, terminal access, draft restrictions and prioritisation of other products over LPG.”

He said the balance was supplied by other domestic producers or via imports because NLNG’s production alone was not sufficient.

Ogbogbo said the company was also working to supply LNG to the domestic market from 2022 to boost power supply and industrial development across the country.

The Nigeria LNG Limited (NLNG) recently said the country’s LPG production remains undermined by the lack of refineries, forcing the company to deploy Butane to help to bridge the domestic demand gap.

Of the 450,000MT allocated to the domestic market by the NLNG, only about 375,000MT was procured by the gas marketers in 2020, according to data shared by the firm.

The Marketing Manager, NLNG, Austin Ogogbo, said, “The inability of the marketers to off-take the LPG was due to logistics and infrastructure challenges as well as other factors in the industry. NLNG supplied over 80 per cent of its LPG sales (Butane/cooking gas) to the Nigerian market and was therefore prioritising the domestic market.

“NLNG’s current maximum Butane production can only meet about 40 per cent of the domestic market demand. The balance was supplied by other domestic producers or via imports because NLNG’s production alone was not sufficient.”

The shortfall in gas supply was highlighted by the Group Managing Director of Nigerian National Petroleum Corporation (NNPC), Mallam Mele Kyari, as one of the reasons for the recent hike in the price of the cooking gas.

Kyari said the corporation was working with other agencies and a strategy has been developed to expand its sources in order to ensure gas is directly delivered to the homes of end-users.

“Today, this country is under-supplied with gas. I can tell you that we are having difficulty feeding our network across the country with gas, every day, it is a trouble to deliver gas. Once your supply is weak, it will affect pricing”, the NNPC GMD said.

“The supply mechanism of our LPG is very weak, that is why we are collaborating extensively to make sure that we are able to extract LPG from our gas resources so that it is made available to the market. Once supply becomes high, definitely, the price will definitely be impacted.”

“We are transiting and we will continue to add more volume into the market so that we bring down the prices.”

One other reason for the recent hike is the re-introduction of Value Added Tax (VAT) on imported LPG, according to the Nigerian Association of Liquefied Petroleum Gas Marketers (NALPGAM).

The Executive Secretary of the association, Bassey Essien, stated the VAT was initially gazetted in 2019.

He stated, “It is unfortunate that the Federal Inland Revenue Service (FIRS) and the Federal Ministry of Finance have gone to resuscitate a product that has been exempted and gazetted from VAT.

“This was gazetted in 2019 and has encouraged domestic gas utilisation. Nigerians are already complaining about the prices of cooking gas across the country, and this would further worsen the situation.”

He warned that the initial objective of domestic availability will be defeated if cooking gas becomes too expensive for ordinary Nigerians.

President Muhammadu Buhari earlier this year launched an ambitious plan called ‘Decade of Gas’ that aims to harness the gas reserves to power the economy by 2030.

Buhari, while speaking at a pre-summit gathering of the Nigeria International Petroleum Summit in Abuja, said the government will leverage the huge gas reserves to become not just a major exporter but a major gas consuming country.

“Our major objective for the gas sector is to transform Nigeria into an industrialized nation with gas playing a major role and we demonstrated this through enhanced accelerated gas revolution,” the president said.

Essien recently noted that even though the country produced four million metric tonnes of gas was being produced annually, only 350,000MT is allocated for use as cooking gas in the domestic market.

According to him, the regular importation of the product to bridge the production shortfall has affected the price of cooking gas in the country.

The Minister of State for Petroleum Resources, Chief Timipre Sylva, recently stated that the challenges in the sector were well understood and that the Petroleum Industry Bill (PIB) will provide a solution in transitioning towards a gas economy.