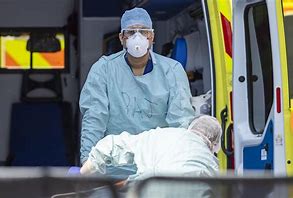 The United Kingdom on Sunday raised its COVID-19 alert level to second highest as cases of Omicron variant continue to increase rapidly.

According to BBC, UK’s four chief medical officers said that the public health risk assessment would move from level three to four, indicating that the transmission of the new strain is high and pressure on healthcare services is widespread and rising. They also warned that Omicron is spreading much faster than Delta and there is less vaccine protection against symptomatic disease from the new variant.

Chief medical officers for England, Scotland, Wales and Northern Ireland urged the public to get their booster jabs if eligible. The health experts said that the emergence of Omicron adds additional and rapidly increasing risk to the public and healthcare services. They said that it is “essential” that people top up with booster jabs, adding that both vaccines – Pfizer and Moderna – increase the immune response substantially and show good effectiveness.

“Data on the severity will become clearer over the coming weeks but hospitalisations from Omicron are already occurring and these are likely to increase rapidly,” the Chief Medical Officers said as quoted by BBC.

“The NHS is currently under pressure mainly driven by non-Covid pressures. With a variant spreading with increased transmissibility and reduced vaccine effectiveness, we are likely to see this pressure rise soon,” they added.

Meanwhile, the decision to increase the five-stage public health risk assessment from level three to four came after a further 1,239 confirmed cases of the new strain were recorded on Sunday. This takes the total number of cases of Omicron to 3,137 in the United Kingdom. It is to mention that the UK Health Security Agency has said that the country will have more than one million Omicron infections by the end of this month if current trends continue unchanged.

Scientists have pointed that the soar and severity of the cases will depend on how much the new COVID variant escapes protection from vaccines. They have appealed to the government to invoke strict measures in order to curb the spread of the deadly virus. Though the UK health officials admitted spreading of the new variant among its citizens but Prime Minister Boris Johnson led-government denied the proposal of imposing lockdown or strict measures in the country.