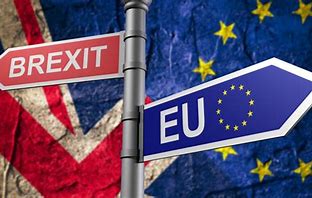 BREXIT tensions between the EU and UK have sparked fears of a trade war, but economics professor Jonathan Portes has said that this could see Brussels hit Britain with measures that would be “very damaging” to businesses.

International Trade Secretary Anne-Marie Trevelyan said last week that the UK will not trigger Article 16 and suspend parts of the Brexit trade deal before Christmas. Prime Minister Boris Johnson and his Government has been threatening to trigger Article 16 and effectively suspend the agreement if the EU does not make changes surrounding the Northern Ireland protocol. Brexit minister Lord David Frost had previously said things would be settled by Christmas, one way or another – effectively setting a deadline. Ms Trevelyan said: “I don’t think anyone’s calling Article 16 before Christmas, absolutely not.”

The UK wants the EU to change the agreement to remove barriers to trade between Northern Ireland and Great Britain.

The Northern Ireland Protocol was drawn up by Lord Frost and the EU two years ago to ensure the border on the island of Ireland remains open.

While the Government continues to say it could trigger Article 16, Jonathan Portes of King’s College London has warned that the EU could use retaliatory measures to damage UK businesses.

The legality of this is unclear, but the EU could also impose targeted tariffs on car parts, which would also be quite damaging.”

He added: “What we have seen over the past few days is the UK Government realising the very unpleasant consequences if it overplays its hands and triggers Article 16.

“Once you start a war, it is difficult to stop it, because neither side wants to be seen to lose, which would be very damaging.”

Professor Portes also explained why a trade war could be worse for the UK than for the EU, even if damage would be done to both sides.

The expert, who is a senior fellow at a think tank called UK in a Changing Europe, argued that the EU has more “clout” and meaning any trade disruption would hit the UK hardest.

He continued: “Common sense says here that the EU is much bigger than we, they have most of the clout here, and we know that some of the claims that the German car industry would force the EU to concessions during Brexit negotiations ended up being nonsense.