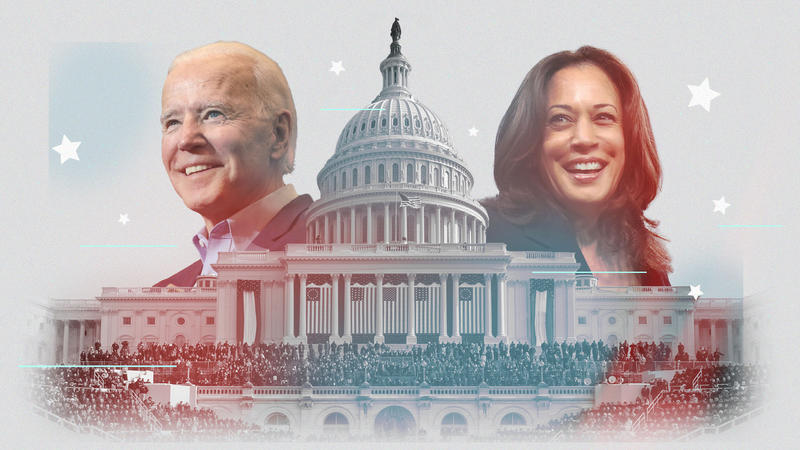 The Long Awaited Inauguration of the 45th President of the United states of America is finally here.

The dream of many Americans to see the 45th president of the United States of America, Donald Trump leave the White House will finally be a reality today as Joe Biden, the winner of the 2020 presidential election will be inaugurated. The ceremony, usually done with fanfare, is on a low key as the nation continues to battle with Coronavirus. The pandemic has claimed nearly 400,000 lives in the United States.
On the eve of his inauguration ceremony, the lost souls were immortalised by Biden and Vice President Kamala Harris alongside their families at the Lincoln Memorial Reflecting Pool. The Pool was illuminated by 400 lights. Each light is meant to represent approximately 1,000 Americans who will have perished from the virus at the time of his swearing-in.

Biden is expected to be sworn in by Chief Justice John G. Roberts Jr. on the Capitol’s West Front sometime before noon. This will be followed by an official escort of the President and Vice-President and their families to the White House with representatives from every branch of the military for one city block. It replaces the traditional parade before cheering spectators along Pennsylvania Avenue.

Biden’s emergence as the new President of America has long been seen by Africans as a redemption of the fraught relationship the continent had with Trump. Trump’s anti-immigration policies and interference in the nomination of Nigerian personalities to key positions on the global stage, notably Ngozi Okonjo-Iweala’s appointment at the World Trade Organisation did not make him a favourite. However, some Christians will lay their lives down for him as he is believed to be a good Christian, despite his blatant and numerous atrocities.

Already, President Muhammadu Buhari has expressed confidence that Biden will restore faith in the country in his congratulatory message to the new President last November.

He said, “President-Elect Biden’s remarkable track record gives us hope that he will add value to the presidency and world affairs. We look forward to greater cooperation between Nigeria and the United States, especially at economic, diplomatic, political and security levels,” he said urging “Mr Biden to deploy his vast experience in tackling the negative consequences of nationalist politics on world affairs—which have created divisions and uncertainties—and to introduce greater engagement with Africa on the basis of reciprocal respect and shared interests.”

As Biden is officially installed in the White House, all eyes will also focus on the Nigerians that will be working with him. They include Adewale Adeyemi who will serve as the Deputy Secretary of the US Treasury, Osaremen Okolo, as COVID-19 Policy Advisor and Funmi Olorunnipa-Badejo as a White House Counsel.

Adeyemi, fondly called Wally was appointed on November 30, 2020, becoming the first African-American to occupy the position. He will work with Janet Yellen who is appointed Secretary of the Treasury. The Osun state born Nigerian was appointed by John Kerry’s presidential campaign at 23 to inspire African-American voters in California. He also participated in the presidential campaigns of John Edwards and Barack Obama. In 2015, he was appointed advisor to the presidency on international economic issues. In 2019, Wally was appointed President of the Obama Foundation that supports charitable work in Africa and elsewhere.

Twenty-six-year-old Okolo was named among the 100 people that will work in the White House. She will be part of the new president’s COVID-19 Response Team that will work to quickly implement a comprehensive, whole-of-government COVID-19 response strategy to contain the pandemic, restore public trust, and protect all Americans. The Edo State indigene worked on the Biden-Harris Transition team before her latest appointment. The effort to reverse the blows dealt on America and the world by the pandemic is a major area that the Boden campaign and by which his performance in office will be judged.

The Harvard graduate of Medicine and African-American Studies was a Senior Health Policy Advisor in the US House of Representatives. Her work experience includes serving as Legislative Aide for both Health Policy on U.S. Senate Committee on Health, Education, Labour, and Pensions (HELP) for Ranking Member Patty Murray of Washington; and U.S. Representative Jan Schakowsky of Illinois.

Badejo on the other hand is a lawyer and an alumnus of Berkeley Law College in the US. She has served as a counsel for policy to the Assistant Attorney-General in the Civil Division of the US Department of Justice and Ethics Counsel at the White House Counsel’s Office. She was also Attorney Advisor at the Administrative Conference of the United States during the Obama-Biden administration.

These three Nigerians, young and brilliant are expected to help President Biden achieve his set goals while putting the spotlight on Nigeria that is notorious for her lacklustre interest in developing young talents.

CAMPAIGN STRATEGY, POLITICS Vs TECHNOCRAT: THE MEN TO WATCH