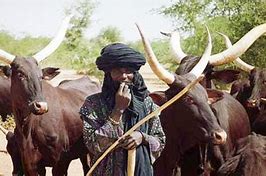 Very recently, President Muhammadu Buhari shocked the entire nation when he announced that he had discovered 368 grazing routes across the country.

It was also reported that the President will proceed to take over these grazing routes, demarcate them appropriately and ultimately develop them for the use of herders and their cattle. This development came a few months after the Southern governors banned open grazing in the entire region. Let me share with you the plans of Mr. President on this project, as reported.

“President Muhammadu Buhari has approved the recommendations of a committee to review “with dispatch,” 368 grazing sites, across 25 states in the country, “to determine the levels of encroachment. The move, according to a statement by presidential spokesperson, Femi Adesina, was to curb the bloody clashes between herders and farmers across the country.

“The President’s directive followed his approval of the recommendations of a committee chaired by the Chief of Staff to the President, Prof. Ibrahim Gambari,” Adesina said in a statement.

“Among others, the committee had recommended the collection of field data on 368 Grazing Reserves across 25 States to assess encroachment and encroachers, stakeholder engagements, and sensitization. The Committee also recommended the production of maps and geo-mapping/tagging of sites, analysis of findings and report preparations as well as design appropriate communication on Grazing Reserves and operations.

“The number of the Grazing Reserves and States were deduced from considerations of existing security concerns and other pre-existing socio-economic conditions. The President directed that the assignment be undertaken with dispatch to bring more understanding on the Grazing Reserves, and implementation.

Nigerians in their multitudes have reacted in total condemnation of this latest policy of the Buhari administration. Let us now examine the legality of this project, by determining ownership of the land upon which the grazing routes are to be established. The law governing the use and administration of land in Nigeria today is the Land Use Act, which came into effect on March 29, 1978. Section 1 of the LUA provides as follows:

The above provisions are clear and unambiguous in terms of the meaning and intendment of the LUA to vest land use management in the Governor of the State on behalf of the people. The powers of the President are clearly defined under the Constitution, especially in section 5 thereof.

Furthermore, the Exclusive Legislative List does not list land as part of items vested in the federal government of Nigeria, for which the President could claim to exercise any right or power over land located in various states of the federation. It, therefore, means that the President has no power or authority over the use, management, or control of land anywhere in Nigeria. Even for the Governors, power over the use and control of land is subject to certain statutory conditions, such as stipulated under the Constitution.

It has thus remained a wonder to me where the President derived his powers to dabble into the issue of land management. For effect, the Land Use Act now enjoys the protection of the Constitution under and by virtue of section 315 (5) thereof:
“(5) Nothing in this Constitution shall invalidate the following enactments, that is to say –
(a) The National Youth Service Corps Decree 1993; (b) The Public Complaints Commission Act; (c) The National Security Agencies Act;
(d) The Land Use Act.

Going by the provisions of the Constitution and the LUA quoted above, the President cannot forcefully and compulsorily take over land in any State as a grazing route as there is no such power granted to him by any of these vital laws.

Whatever law the President is relying upon to trace the so-called grazing routes is totally repugnant to equity and natural justice, and inconsistent with the provisions of the Constitution and even the LUA. And since the Land Use Act came into force after the purported gazette being touted as the source of grazing routes, it automatically repeals the said gazette by necessary implication.

To be continued tomorrow.
Adegboruwa is a Senior Advocate of Nigeria (SAN).

America’s Advantage and Biden’s Chance_ The Can_ do Power

Can Naira be saved from further devaluation?