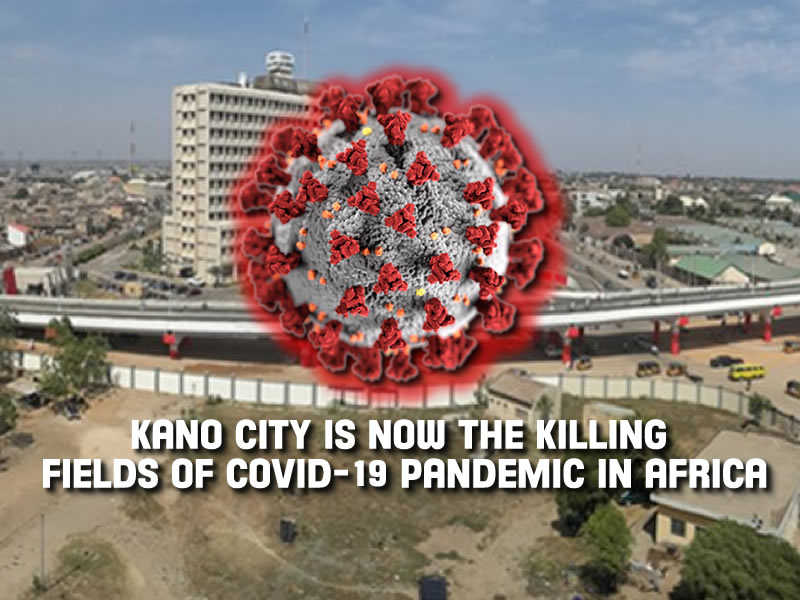 I raised alarm in an article I wrote which was published in the Daily Trust Newspaper (page 6) on April 22nd, 2020 on how COVID-19 was ravaging Kano city. I opined that if urgent action was not taken by the Federal Government, the city could become the epicenter of the virus on the African continent. Recognizing the disastrous consequences of such a scenario, I offered recommendations that could help stem the slide.

Today, I raise my voice again, this time to join the growing chorus of people both within and outside the State who are horrified by Kano State Government’s (KNSG) cavalier response to this pandemic seeing it as a growing danger to the lives of people in Kano, its neighbors and also a threat to our National Security.

A heart-breaking audio clip making rounds on social media of a grieving grandmother who had just lost her son-in-law to COVID-19 in Kano city sums up the feeling of helplessness of people in the city. She was venting her frustrations at NCDC officials in Kano who switched off their phones and those at their HQ. in Abuja that refused to return her calls when she desperately needed them. She narrated how her son-in-law was initially taken to a Private Hospital then transferred to Aminu Kano Teaching Hospital (AKTH) where he died shortly after arrival.

It is now common knowledge in Kano that NCDC officials in the city are not responding to people’s distress calls because they are short-staffed and have no working materials or Personal Protective Equipment (PPE). This unacceptable situation has resulted in many of them being infected by the virus, resulting in the closure of the only test center in Kano. Below is an example of one of the many distress calls and text messages I have been receiving from unknown Kano residents:

“Good afternoon Prof., One of my staff lost his mother today Friday 24th, April 2020 to circumstances similar to COVID-19 with (sudden fever, coughing, and rapid breathing). When we went to bury her ​at 9.30 am​, we discovered that my mother’s body was the 18th to be buried since dawn (a time span of 3-4 hours). Why is the Kano State Governor denying COVID-19 deaths in Kano? People should please speak up and get us help.”

There are also reliable reports indicating that cemetery workers in the city have been censored and directed by State officials not to give any interviews divulging the number of burials. The Kano State Government (KNSG) is clearly downplaying and denying these deaths just like officials in Wuhan, China did at the beginning of the pandemic. In fact, the Governor appeared on Channels TV, spouting these denials while in the same breath asking for N15b aid from the Federal Government. The next day, his Commissioner of Health appeared on the same Station stating it was just 640 deaths in six days. Kano State, in spite of its population density, is the most notorious state where social distancing measures are least enforced and obeyed, with youths still playing football while gatherings in mosques and weddings continue as if all is well.

As a result of his negligence, Gov. Ganduje is also exporting COVID-19 to the neighboring states of Katsina and Jigawa by repatriating hundreds of Almajiris who are most likely infected by COVID-19 to their States of origin. This, in my opinion, was a very thoughtless and dangerous action. The Governor initially set up a State Task Force with his daughter as a member. Despite being a Medical Resident, she is said to wield so much power that even the Deputy Governor defers to her and the educated views of senior medical professionals are not taken seriously. The task force is now virtually moribund since its key members went into isolation after testing positive for the virus.

I urge all sons and daughters of Kano wherever you are, to step up and raise your voices to save your people from this catastrophe, silence is not an option at this defining moment. Governor Abdullahi Umar Ganduje must bear full responsibility before man and God Almighty for the chaos that is costing the lives of so many souls which is simply a reflection of his poor leadership, incompetence, corruption, and lack of compassion for his people. The Federal Government needs to urgently step in to stem the rising death count before it is too late.

(a). COVID-19 death toll is undeniably rising daily in Kano

(b). KNSG lacks the will, capacity, compassion, transparency, or the trust of its people to arrest the situation

(c). KNSG is in denial and doing all in its power to hide these deaths.

(d). Healthcare workers in Kano are in mortal danger without PPE.

(e). Private Hospitals are shutting down due to fear of infecting their staff and for lack of capacity to deal with COVID-19 patients.

(g). The only COVID-19 Testing Centre in Kano has now been shut down, leaving millions of people in the whole NW zone without access to testing.

(h). People are living in fear, uncertainty, anger, frustration, and feel abandoned by both the state and federal governments.

(i). Concerns about social unrest are real and should be taken seriously by both the State and Federal governments.

(I). Immediate and forceful Federal presence in Kano.

(ii). The Presidential Task Force should relocate to Kano and make it its new theatre of operation reporting to the President.

(iii). People should immediately be provided with food supplies to enable humane but strict enforcement of total lockdown, which remains the only way of breaking the spread of the virus.

(iv). The President should address the Nation on these deaths with specific plans on what the FGN will do.

(v). NCDC lab in Kano should immediately be opened with increased testing capacity.

(vi). Healthcare workers should immediately be provided with PPE.

(viii). All Deaths and infections from COVID-19 should be properly recorded

(ix). Swabs should be taken for the COVID-19 test from all corpses to enable proper mapping of the spread of the virus and the protection of contacts.

Usman Yusuf is a Professor of Haematology-Oncology and Bone Marrow Transplantation.