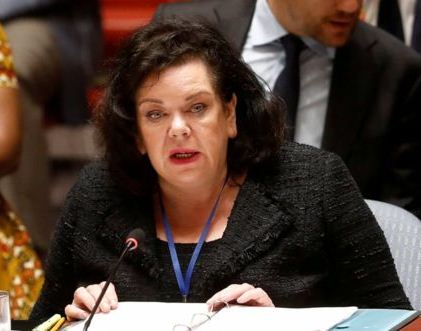 The government has named Dame Karen Pierce as the new ambassador to the US.

Dame Karen – who is currently the UK’s permanent representative to the United Nations – will become the first woman in the post.

She replaces Sir Kim Darroch, who resigned in 2019 after he called President Donald Trump’s administration “clumsy and inept” in leaked emails.

Dame Karen said she hoped to “strengthen the special relationship” between the countries.

Prime Minister Boris Johnson called her “an outstanding and accomplished diplomat”, tweeting: “I can think of no better person to drive forward our hugely important relationship with the United States at this time.”

Foreign Secretary Dominic Raab also congratulated Ms Pierce on her appointment, saying it was “a time of huge opportunity for the friendship between the UK and US”.

The posting comes ahead of post-Brexit trade deal negotiations with the US, and amid rows between the two nations over the future of the Iran nuclear deal and the use of Huawei technology.

Dame Karen joined the Foreign and Commonwealth Office (FCO) in 1981.

She held posts in countries around the world, including Japan, Switzerland and the US, before becoming the British Ambassador in Afghanistan between 2015 and 2016.

She then returned to London as the FCO’s political director and chief operation officer until her posting at the UN.

After the announcement of her new role, Dame Karen said: “I am honoured to have been asked to represent the UK in the US. I think it is the UK’s single most important relationship. There is a deep bond between Britain and the US, built on many pillars.

“We have a fantastic cross-government team across the US and I look forward to working with them to strengthen and even further deepen the special relationship between our two countries and peoples.”

Mr Raab added: “I am delighted that Karen Pierce will take forward this exciting new chapter in our relationship.

“We’re proud to be sending to Washington such an outstanding diplomat, and I warmly congratulate her on her appointment.”

Dame Karen Pierce is widely regarded in the diplomatic world to be a good egg.

She is a Foreign Office lifer who has served all over the world. Blunt and no-nonsense, maybe, but also wily in the ways of Washington.

She has held several posts both there and at the United Nations in New York, and she has the confidence of the prime minister who got on well with her when he was foreign secretary.

So, Dame Karen is hugely qualified for the job, but will need every bit of her charm and guile in the months ahead.

UK/US relations are at a low ebb after disagreements about Iran, Huawei and digital taxes, along with the diplomatic row over the death of Harry Dunn.

Her biggest challenge, of course, will be to help secure a trade deal between the US and post-Brexit Britain. And that will be no easy task.

The UK has not had an ambassador in the US since Sir Kim resigned in July after the emails – dating from 2017 – were leaked.

In his resignation letter, Sir Kim said the situation made it “impossible for me to carry out my role as I would like”.

President Trump branded him “a very stupid guy” and said he would no longer work with the diplomat.

The row erupted in the middle of the Tory leadership contest, with the now-Prime Minister Boris Johnson heavily criticised for not fully supporting Sir Kim.