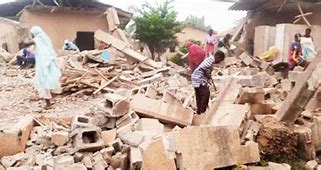 Some of the victims sifting through the debris of their demolished houses
Residents of Malali Low Cost in Kaduna metropolis are counting their losses after their homes and other valuables were destroyed by bulldozers of the Kaduna State Urban Planning and Development Agency (KASUPDA) in the late hours of Saturday.

Working on a prior eviction notice in March, KASUPDA showed no mercy as its bulldozers pulled down houses at 10pm while security agents stood by to provide cover for the government officials to carry out the directives.

Residents said they were put in a state of disarray especially since a state high court had issued an injunction stopping the state government from demolishing the properties and adjourned the case until June 18th.

Malam Nasir Bello who, like many others, lost his home, said he was born in the community in 1978 but is now homeless and squatting with friends.

“They came about two weeks ago to demolish the houses but faced some resistance from the youths which is why they came back at night. They came with the backing of security men from the civil defence, vigilante and government officials,” he said.

According to him, by going ahead with the demolition exercise, government had disobeyed a court order.

Malam Haruna Mika’ilu, another resident, said some of them who were lucky had evacuated their belongings but many others were unable to do so, thus losing everything.

“I had already paid rent for two months to the landlord, unfortunately, the house has been taken over by the government and my money has gone down the drain. Looking at the present situation, the government has not done well for us,” Mika’ilu said.

He said this act by the government has further caused hardship to residents of the state, adding that, “Many people lost their houses, some do not have a means to rent another house except if friends, relatives assist them to pay the rent.”

Arewa Trust Weekly reports that Kaduna State Development and Property Company LTD had in a letter of notice dated 25th March, 2021, informed the occupants of block 3C, Gambia crescent, Malali phase II Kaduna, that their tenancy over the premises had been terminated.

The letter tilted: ‘Notice of owner’s intention to recover possession of premises’ which was signed by the KASUPDA’s Company Secretary/Legal Adviser, Abraham K. Sallau, on behalf of the Managing Director/Chief Executive Officer of the company, further gave the occupants 21 days’ notice to vacate the premises. It warned that, “Failure to which KSDPC will be left with no option, but to commence an action of recovery, including claims for damages and associated cost,’’ the notice stated.

However, Malama Zainab Mai’ogu, a trader at the Malali market who said she was sleeping around 9pm when she was alerted at the approaching bulldozers, denied knowledge of any notice to vacate the premises. “I lost a lot of properties in the house that was demolished and my family and I have been forced to sleep without a roof over our heads,” she said.

He said the houses were built by government for its lower staff cadre but decades later, the houses have remained in a dilapidated state which is why government feels the need to demolish them to make way for modern houses with modern markets and parks.