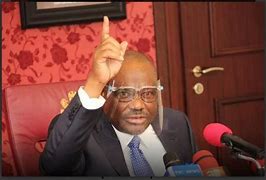 Governor Nyesom Wike of Rivers State, on Tuesday, June 29, 2021, described governors and other members of the Peoples Democratic Party, PDP, defecting to the ruling All Progressives Congress, APC, as lacking conscience and not trustworthy. Wike at the flag off of Woji-Aleto-Alesa-Refinery Road and bridge with spur to the East-West Road at Woji town.

Wike at the flag off of Woji-Aleto-Alesa-Refinery Road and bridge with spur to the East-West Road at Woji town, Obio Akpor Local Government Area, Rivers, said it was treacherous of anyone to abandon the PDP after riding on the back of the party to power.

He said, “People who could not win ordinary election. The party used technicality, went to court and got victory. Now,  they are leaving the party. Hopeless, shameless human beings. People who have no conscience.”

On perceived ruling APC’s intimidation to win PDP governors over, Wike said, “Bring everything you have against me, I will not join you. Rivers state will not join you. Even if it is only Rivers in this country, we will continue to be PDP.”

The governor said, “I didn’t know he (Peterside) does not understand what they call promissory note. N78 Billion was not backed by cash by the Federal government. N78 Billion was approved, but not in cash.

“So the bank has to come in to take and discount it, because federal government is going to pay them back in the next four years. What Rivers state government got was N52 Billion out of N78 Billion. But, in principle, N78 Billion was approved, but was there any cash? No cash to back it up.”

Sen Theodore Orji, who as Special Guest performed flag off of the Woji-Aleto-Alesa-Refinery Road commended Governor Wike for running an inclusive government and executing projects that impact positively on the people of Rivers.

“God specially packaged you to be the governor of Rivers State. And to show them that there is God, whatever you are doing is from the inspiration of God. Don’t relent”, the former Abia state governor stated.