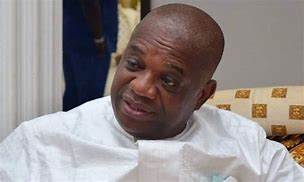 Chief Whip of the Senate , Senator Orji Uzor Kalu has condemned the recent spate of insecurities in the South-East describing it as declaration of genocide in the nation.

He lamented that the destruction of homes and infrastructure ,detailing it as strange since the Igbos are never known for such kind of destruction.

In a statement on Tuesday, personally signed by the Senate Chief Whip, he noted that the 1967 genocide cannot be tolerated. Hence, all masterminds of this recent demonstrations must restrain from such deeds .

Many operatives had been killed and election materials burnt in constant attacks on police stations, INEC facilities, courts and correctional facilities by gunmen, suspected to be IPOB militants across the southeastern states.

Questioning the sense in the killing of policemen and military officers , he asked the masterminds and perpetrators of the deadly act the wisdom in eliminating those meant to protect them, families and relatives .

Kalu urged them to have a rethink in their actions and choose a more righteous path in expressing their grievances.

“We should not either by words or actions pursue a repetition of that horrible genocide . We should come to understand that every war ends on a table. Instead of destructions before coming to the table , is it not wiser to come to table and avoid destruction? We need infrastructure , we need investments , we don’t need hostilities. So we are pleading with you to stop and embrace peace . “

Kalu also reaffirmed his call for a national dialogue to be chaired by the president.

“We have come a long way , our entanglement is so deep that all we need is diligent and deliberate efforts to realize the great dividends of diversity and pluralism. Our unity is our strength and can forever live in unity notwithstanding the diversity in culture, religion and tongues. A dialogue that has all stakeholders on the table and the president chairing it will go a long way in dousing tension across regions .” Kalu said

Why We Voted For E-Transmission Of Results With Conditions — Lawan