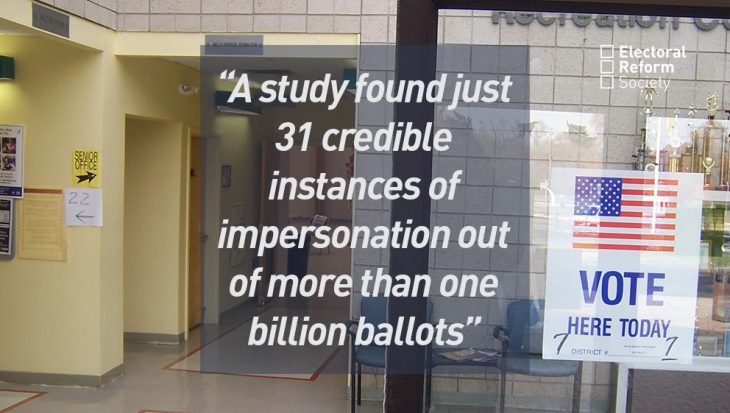 In recent years, some states have made efforts to make voting easier. In several states (Colorado, Oregon, and Washington) voting takes place almost entirely by mail. In 16 states, voter registration now takes place automatically when you interact with state agencies such the DMV and in 17 states and Washington DC you can register to vote on the day of the election itself.

In 1997 the state of Texas even changed its electoral regulations to allow voting from outer space after astronaut John Blaha was left unable to cast his vote in the November 1996 election, because his mission on lasted until after the polls closed.

While this election cycle has seen many states making it easier to vote due to the challenges of conducting an election during the coronavirus pandemic, in some states the right to vote is coming increasingly under threat.

Until 2013 the Voting Rights Act required certain states who had a history of curtailing voting rights to obtain federal pre-clearance for any changes to how their elections operate.

But a landmark decision by the Supreme Court in 2013 struck down key parts of the Act and, for the first time, allowed to all states make changes to how elections are run without federal oversight.

The move was highly controversial, with President Barack Obama expressing deep disappointment in the ruling and calling on Congress to pass legislation to ensure “every American has equal access to the polls”.

Others such as lya Shapiro of the Cato Institute said that the Supreme Court’s decision “restore[d] the constitutional order”, arguing that widespread racial discrimination no longer existed in the United States, so such laws were unnecessary.

Within hours of the decision Texas and Mississippi officials pledged to enforce voter ID laws that had not been precleared by the Attorney General, and since the ruling several more states have passed strict new voter ID laws, as well as other restrictions on registration and voting. Voting rights groups say the outcome has been to curtail voting rights for millions of Americans.

The problem with voter ID

As it stands, 36 US states now have some form of ID requirement to go to the polls.

The politicians and officials pushing such proposals use arguments that will be familiar to many of us in the UK, arguing the reforms are just common sense proposals designed to protect voting from fraud, and that the reforms would have little impact on voting rights as most people have some form of the ID required.

But not everyone actually does have the ID required to vote.

The ACLU estimate that 11% of U.S. citizens – or more than 21 million Americans – do not have government-issued photo identification required to vote in many states.

In states where voter ID is required to vote, the law requires that free voting ID must be available. But even if you attempt to get the ID required to cast a ballot in many states it can be surprisingly difficult.

A study from the US Brennan Centre found that in ten of the states with restrictive voter ID laws, many ID-issuing offices operated limited opening hours with less than half of the offices in Wisconsin, Alabama and Mississippi open a full five-day week. An ID office in Sauk City, Wisconsin is open only on the fifth Wednesday of any month. But, in 2020, an election year, only five months even have a fifth Wednesday.

Even when offices were open for many voters, getting there was difficult. More than 10 million eligible voters live more than 10 miles from their nearest state ID-issuing office that’s open more than two days a week. One study found that in Texas, which has some of the strictest ID requirements in the country, some people in rural areas must travel approximately 170 miles to reach the nearest ID office.

And research has shown that these requirements disproportionally effect black and ethnic minority voters. A 2018 poll found nine percent of black respondents and nine percent of Hispanic respondents indicated that, in the last election, they (or someone in their household) were told that they lacked the proper identification to vote. Just 3 percent of white voters said the same.

The truth about voter fraud

But in an election where we’ve seen multiple attempts at electoral intimidation in states like Missouri and Georgia, as well as the President scaremongering about voter fraud long before the polls even opened, nobody can deny the importance of protecting electoral process to preserve faith in the integrity of the ballot.

But in a country which has a history of campaigner-led fraud through vote buying, vote tampering and ballot box stuffing, voter impersonation – the only issue addressed by mandatory voter ID – is a rare occurrence.

A comprehensive 2014 study published in The Washington Post found just 31 credible instances of impersonation fraud from 2000 to 2014, out of more than one billion ballots cast. Even this tiny number is likely inflated, as the study’s author counted not just prosecutions or convictions, but any and all credible claims. The Washington Post also published a study on the 2016 presidential election that estimated there were just four cases of voter impersonation.

The fact is that ballot fraud in any form is incredibly rare and when it does happen does so in numbers that fail to justify the draconian measures adopted by many states that could see millions of legitimate votes disenfranchised and unable to vote.

A solution without a problem

By importing US style voter ID laws to the UK, we risk reducing trust in our own electoral processes – while failing to tackle the real problems with Westminster’s political system.

We’ve heard countless stories of the problem of strict ID laws in the US during this election and, as in the US, when there is little to no evidence of widespread fraud here in the UK. Introducing mandatory voter ID would do little more than cut millions of legitimate voters out of our democratic system.

Instead, ministers should be tackling the real threats to trust in politics: loopholes which allow foreign funding of our parties, the revolving door between donors and the House of Lords, and the spread of ‘dark ads’ and disinformation online.

Let’s not mimic the worst aspects of elections abroad – and instead look at how to make our elections work better for everyone.