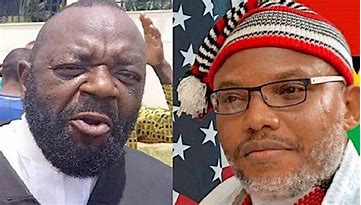 Barrister Aloy Ejimakor, a lawyer to Supreme leader of Indigenous Peoples of Biafra, (IPOB) Nnamdi Kanu has disclosed that no Court of law will embark on the trial of Kanu.

Barrister Ejimakor who spoke exclusively with Elombah TV anchored in United Kingdom (UK) explained that it would be unlawful for any court of law to embark on Nnamdi Kanu’s trial because he was renditioned and not extradited to Nigeria, an act which is unlawful in the eyes of the international community.

According to him, the extra-rendition of Kanu would render any trial that does not first deal with the manner of his abduction illegal, and null and void seeing that extra rendition is international crime.

He added, “the Nigeria bench warrant that purportedly revoked Kanu’s bail does not have validity outside Nigeria.

“The Court knows that the warrant it issued did not mention ‘cross border’ and so not applicable outside Nigeria – how can you entertain a warrant that is executed outside Nigeria Jurisdiction.

“Kanu can never get fair trial under this jurisdiction and under these circumstances. There will not be any trial until they resolve the issue of the extra – ordinary rendition. The Nigeria government has broken two laws in this process.,”

He also said that Kanu’s arraignment may not be possible on July 26, 2021, because the court is already on vacation.

According to him, it is likely the matter will be adjourned because the Court is already on vacation. The matter can be heard by vacation judge when it has to do with fundamental human rights.

“The vacation judge will hear the matter, but not to take the trial.”

On the arrest of Kanu in Kenya, Barrister Ejimakor said the IPOB leader was held incommunicado for eight days in Kenya after he was arrested at Jomo Kenyatta Airport and was tortured, adding that Kanu only survived the torture because of strength of character and God’s glory.

He said Kanu had been in Kenya since 14 April before he was abducted.