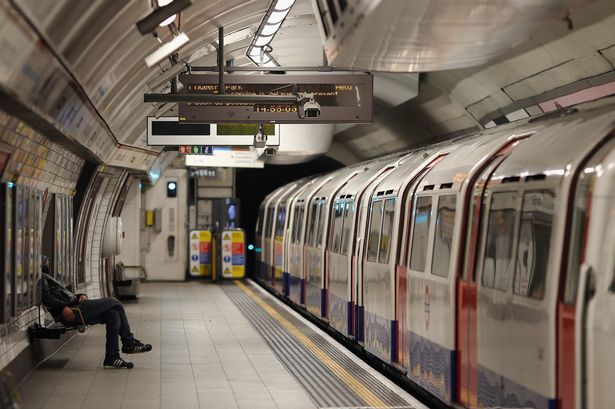 There were just three people per train on average last year.

London’s least used open station is now Sudbury & Harrow Road , a station that sees just eight trains per weekday and nothing on weekends and bank holidays, according to the Office of Rail and Road.

The low usage, despite the coronavirus pandemic, is not surprising given how few trains stop there.

Being just 400 metres away from Sudbury Town Tube station on the Piccadilly line, where there are trains at least every 10 mins all day every day, there is little demand for more trains.

To say the two-platform station is ‘basic’ is an understatement.

There is no ticket machine, it has only a small bus stop-like shelter for passenger comfort, and is unstaffed. The platforms can only fit three carriage trains too

Like many of London’s least used stations according to the figures, Sudbury & Harrow Road does not have ticket barriers.

This can skew the figures as those with paper Travelcards who use the station may not be counted in its figures as they do not go through a machine.

Join the Mind The Gap group

However, given the train service available (four trains to Marylebone in the morning and four back from Marylebone in the evening on weekdays only), it is unlikely that there would be many people using paper Travelcards as those tickets are predominantly aimed at leisure travel.

There is CCTV, monitored by Chiltern Railways, and working real-time information screens that mean the station is functional at the bare minimum – even if it is not very inviting or well advertised.

Ironically, the station’s biggest claim to fame is being the terminus for London’s busiest bus route, the 18, which runs from Euston along the Harrow Road.

This year’s figure of 6,258 implies that on average 2.98 (more likely three) people per train boarded and alighted, or around 24 per day.

This means that the popular station gets the same amount of people using it in 45 seconds as Sudbury & Harrow Road in a day.

There are no plans to increase the service, nor plans to cut the service entirely as formally closing a railway line or station on the National Rail network is a lengthy legal process, meaning it is often cheaper to provide a skeleton service and minimal facilities than to axe it completely.

It is for this reason that there are a handful of random ghost’ trains (formally known as parliamentary services) that operate on some of London’s most obscure railway lines.

The figures also revealed that Heathrow Terminal 4 was technically the least used railway station with just 162 passengers, but that station has been closed since the first lockdown and has still not reopened.

The figure of 162 is an anomaly due to the closure rather than a true reflection of low usage.

NIGERIA, OTHERS NOW TO ENJOY ZERO DUTY EXPORTS TO THE UK.