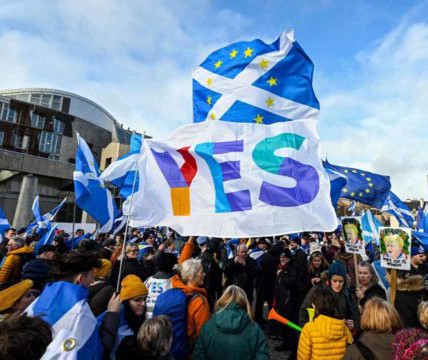 Brexit: Nigeria may benefit from new trade deals, changes in visa requirements, others

Activists attend an anti-Conservative government, pro-Scottish independence, and anti-Brexit demonstration outside Holyrood, the seat of the Scottish Parliament in Edinburgh on February 1, 2020. Britain began its post-Brexit uncertain future outside the European Union on Saturday after the country greeted the historic end to almost half a century of EU membership with a mixture of joy and sadness. There were celebrations and tears on Friday as the EU’s often reluctant member became the first to leave an organisation set up to forge unity among nations after the horrors of World War II. Andy BUCHANAN / AFP

Friday’s exit of the United Kingdom from the European Union (EU) may benefit Nigeria in diverse ways if the sentiments expressed by Nigerians resident there are anything to go by.

Already, at the first ever United Kingdom-African Investment Summit, which two weeks ago took place at 10 Downing Street, the British Prime Minister, Boris Johnson, explained that it was meant to be “a new start in our business partnership with Africa.”

He also charged African leaders and entrepreneurs in attendance to “let us seize the opportunities before us to build a partnership for the future.”

Against the backdrop of Great Britain exiting the European Union (EU) on Friday, the Summit was like an invitation for African presidents to come to the table and negotiate.

To show that Britain was aggressively seeking new trade partners outside of the EU, the Department of International Trade (DIT), disclosed that prior to the Summit itself, deals to the tune of £6.5b had already been signed between British businesses, and a number of African countries. The purpose was to deliver jobs, growth and open up opportunities for more of such across both Britain and Africa.

In fact, the DIT and the Department for International Development (DIFD), stated that the meeting was supposed to provide a platform for more handshakes across tables, and for signing the dotted lines in order to secure more multi-million pounds deals for the mutual benefit of both sides.

With the British government shoring up investment capital, both the DIT and DFID revealed that programmes that would “boost clean energy supplies, digital networks, jobs, and business opportunities for women, as well as facilitate steps aimed at improving trade infrastructure,” have already been lined up in Africa.

Chief host, Johnson, declared the “new era” opens with a promise to put “people before passports.”

Whether he meant opening up the country for the inflow of skilled talents from every part of the world, or that UK will not discriminate against professionals from Africa in the recruitment of skilled migrants or whatever, the fact that billions in investment capital is flowing between both sides is a sign that the UK is ready to do business with Africa.

“Together let us write the next chapter for my country, for your country, and above all, for all the peoples of our countries,” Johnson said.

However, a Labour councillor of Nigerian decent, Susan Jumoke Fajana-Thomas, argued that due to the period of uncertainty that is still ahead for the UK, “It’s difficult to say what the impact of Brexit will be on Nigeria at this point.”

Fajana-Thomas, who doubles as a socio-political commentator of African affairs, said: “Definitely, the UK economy will have a period of uncertainty in the short-term, and this will impact negatively on Nigeria. But opportunities will open up as well. This is because as the UK moves to negotiating new trade deals with various countries, this may lead to either renegotiating existing trade deals with Nigeria or abandoning current trade arrangements.”

London Political Summit Convener and Founder, Godson Azu, saw Brexit as an opportunity for Nigeria and other countries to readily become the new trade partners the UK is obviously seeking.

“Brexit is a second chance for Great Britain to re-launch itself into the global arena as an independent developed nation, in this era of competitive globalisation and multi-polarity world order. Moreover, Britain going global opens a new frontier for many key commonwealth and African countries, such as Nigeria.”

He argued: “In the new age of advanced technology, coupled with rising demand for technology transfer, among others, Nigeria is in a good position to make real gains. But only if the government can reposition itself as a good negotiator with rational economic, trade and foreign policies, that give it an edge in the value chain outcome.

“Nigeria would gain much, if they addressed the issues affecting its commodity produce, in terms of quality and international standardisation that would meet UK import regulatory systems…”

The TV commentator noted further: “Nigeria would gain much if she addresses issues affecting its commodities and produce, in terms of quality and international standardisation that would meet UK import regulatory systems.

The commodity import opportunities from Nigeria would help grow the market base of its farm produce, and thereby improve the connectivity between farmers and the Nigerian-British businesses and this could lead to “an increase in the growth of Nigerian-owned businesses in the farm and commodity market across the regions in Britain.

“Another gain for Nigeria would be as a result of the new changes in immigration stature and visa requirements conditions, which are going to
be fairer, considering people before passport, and with the point base professional visa system, which would allow the best brains to access job
and school opportunities in the UK without much stress.”

Yetunde Adeshile, a member of the UK Conservative Party, where she has been appointed as the Conservative’s spokesperson for Vange Basildon within the Basildon and Thurrock Federation, said: “History was made again yesterday (Friday) in Britain. This time, it was for the final exit of Britain from the EU after 3.5 years of negotiations, following the referendum that favoured Brexit by just two per cent.

“This historic event, though planned and we all knew was coming, still brings mixed feelings in the UK and Europe. However, I believe that whether you wanted Brexit or not, it has happened.

“Our priority now is to focus on rebuilding Great Britain, whilst maintaining our nation’s relationship with Europe…”

Charles Oguntoye, a lawyer, political analyst and businessman, charged Nigeria to make her population count as it forges a new vista in its relationship with her former colonial master.

He said: “Let’s look at our beloved country Nigeria, we are relevant on the world stage because of our population; we have seen businesses queuing up to come to Nigeria despite our obvious challenges.

“In any trade negotiation, the UK will be considerably weaker, and I wished and hoped that African countries that attended the UK Economic Forum attended as the African Union so as to give us a bargaining power, but we went individuals, weak states.

BREXIT DEAL DONE IN RECORD TIME; A GOOD DEAL OR A HARD DEAL