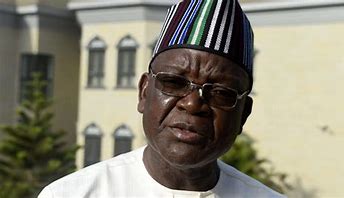 The rift between the presidency and Governor Samuel Ortom of Benue over proposed grazing routes across states has snowballed into more serious issues.

This is as Ortom’s predecessor, George Akume, on Monday, August 30, called on him to tendered an apology to President Muhammadu Buhari over his alleged foul language.

Senator Akume who is the minister of special duties and intergovernmental affairs, in a press conference accused the governor of operating outside the set rules of engagement between the state and the federal government.

Moreover, the minister also made a call to the Economic and Financial Crimes Commission (EFCC) and the Independent Corrupt Practices and Other Related Offences Commission (ICPC) “to thoroughly investigate the application of the total federal allocations to the state from May 29, 2015, to date.”

“The federal government should as a matter of urgency direct the disbandment of the Livestock Guards in Benue state for their involvements in nefarious and criminal activities leading to the breach of peace and massacre of innocent citizens of Benue state.”

Meanwhile, the presidency on Saturday, August 28, denied the allegations that President Muhammadu Buhari accepted in 2012 the invitation to be Boko Haram negotiator.

The denial was made as the face-off between the federal government and Ortom of Benue state continued to fester over insecurity and killings in the country.

Presidential spokesman Garba Shehu, in an interview with BBC News Pidgin, said the allegation by Governor Ortom against his principal was baseless.

He added that Buhari was not chosen by Boko Haram as their negotiator when his predecessor, former president Goodluck Jonathan, reportedly moved to enter an agreement with the dreaded sect.

How Africa hopes to gain from the ‘new scramble’