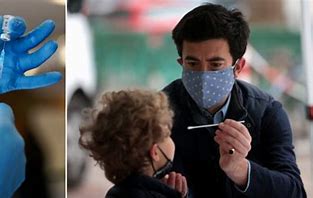 Children under 16 will start being vaccinated against Covid-19 next week in a move ministers hope will stop school closures and ultimately help to bring the pandemic to an end.

The UK’s four chief medical officers have recommended that everyone aged 12 to 15 should be offered the chance to be vaccinated with a single dose of the Pfizer jab.

They concluded that while the direct health benefit to children from being vaccinated remains low because they are so unlikely to become seriously ill, rolling out the jab will reduce the risk of major disruption to education thanks to outbreaks in schools.

Chris Whitty, the chief medical officer for England, told a press conference that the vaccines would not be a “silver bullet” in the pandemic or protecting education, but added that the benefit of giving them to younger teenagers exceeded the risks.

Health Secretary Sajid Javid responded: “I have accepted the recommendation from the chief medical officers to expand vaccination to those aged 12 to 15 – protecting young people from catching Covid-19, reducing transmission in schools and keeping pupils in the classroom.

“Our outstanding NHS stands ready to move forward with rolling out the vaccine to this group with the same sense of urgency we’ve had at every point in our vaccination programme.”

In England, the vaccine will be delivered in schools starting from next week. Healthcare staff will be instructed to seek consent from a parent, guardian or carer before administering the jab, but teenagers who want to be vaccinated against the wishes of their parents will usually be able to do so under a longstanding legal principle that older children can make decisions about their own medical care.

Speaking in Parliament on Monday night, vaccines minister Nadhim Zahawi confirmed: “We will now move with the same sense of urgency we’ve had at every point in our vaccination programme.”

He added: “Whatever decision teenagers and parents take, they must be supported and not stigmatised in any way, We must continue to respect individual choice. As a father, the decisions that I take on behalf of my own children, give me extra pause for thought.

“People who wouldn’t think twice about getting the job for themselves will naturally have more questions when it comes to vaccinating their children, and I completely understand that.”

Gregor Smith, Scotland’s chief medical officer and a veteran GP, insisted that discussions with young patients about health decisions were the “bread and butter” for family doctors.

The CMOs did not consider the wider benefits to society of vaccinating more teenagers and therefore reducing transmission in the population at large when making their decision, but they said that increasing the number of people who are vaccinated would be expected to have an effect.

Dr Smith said: “We know from experience of other vaccination programmes that by reducing transmissions across age groups, it may have a beneficial impact across those age ranges.” Professor Whitty added: “Anybody who has a vaccine is protecting people around them as well as themselves.”

All four CMOs insisted that if asked by any individual teenager, they would advise them to accept the offer of a Covid-19 vaccine, although the decision would be more marginal than with older groups. Professor Whitty said: “What we are not trying to do is say to children ‘you must, must, must, must, must’ but what we are saying is we think – on balance – the benefits both at an individual level and in terms of wider indirect benefits to education and, through that, to public health, are in favour.”

Conservative MP Steve Brine warned that teachers must not pressure children into accepting the vaccine. He told Times Radio: “I struggle greatly with the issue around parental consent not seeming to matter here.”

How jabs decision was made

The four chief medical officers of the United Kingdom’s four nations were asked to advise ministers on the vaccination of children after the national jabs watchdog decided it was too finely balanced to make a call.

The Joint Committee on Vaccination and Immunisation (JCVI) said that the benefits for children aged 12 to 15 of being protected against Covid-19 were only a little larger than the potential risks from side effects such as the heart condition myocarditis. On the basis of that narrow conclusion, it did not recommend a full-scale rollout when it reported back on 3 September

Its members said they were unable to take into account more complex considerations such as the effect of disruption to education on individual children, so they asked the CMOs – who can take a broader public health perspective – to take on the decision.

Chris Whitty and his counterparts from Scotland, Wales and Northern England consulted a number of British experts and examined evidence from countries such as the US, Canada and Israel where millions of children have already been vaccinated.

They concluded that the closure of schools and disruption to regular face-to-face education damaged the “welfare and mental health of many children and young people”, particularly those who are already disadvantaged, and also undermined their long-term life chances which makes it more likely they will suffer health problems in future.

Offering the vaccine to under-16s will reduce the likelihood of further disruption by limiting the number of outbreaks in schools, although it will not eliminate it altogether, the CMOs believe. They also decided that there was only minimal risk of undermining other important child vaccination campaigns such as the flu jab by rolling out Covid-19 vaccines alongside them this autumn.

They did not consider any possible benefits to other age groups of vaccinating those aged 12 to 15 when making their decision. However, they acknowledged that extending the rollout will end up reducing the risk to Britons of all ages by cutting coronavirus transmission overall.

One reason that only one vaccine dose is being offered in the immediate term – pending a review of the evidence from the JCVI which is likely to come towards the end of this year – is because myocarditis appears to be more prevalent after children have received a second jab. They have decided to use only Pfizer for this age group, partly because there is more evidence about the use of mRNA vaccines in the young and partly because of the specific concerns around rare blood clots in people who have been given the AstraZeneca jab.

There is little immediate prospect of offering Covid-19 vaccines to any children younger than 12, although this is being considered in some other countries and clinical trials are already underway.