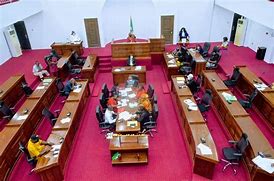 The Imo House of Assembly has suspended six of her members indefinitely with immediate effect for unparliamentary conducts and gross insubordination against constituted authorities and all standing committees dissolved with a minor reshuffle effected on principal offices.

In exercising its powers enshrined in the recently assented Act by the President — Legislative Houses (Power and Privileges) Act 2018, the Imo State House of Assembly Thursday, July O8, 2021 suspended six of her erring members who are bringing the Speaker Rt. Hon. Paul Emezien, some other principal officers – their colleagues, and the institution of the IMHA to great and unbearable disrepute.

He also announced that all standing committees of the House have been dissolved.

It was learnt the suspended members objected the decision, describing it as illegal and undemocratic.

It was gathered that there was uproar as the representative of Ihitte Uboma, Onyemaechi Njoku, tried to engage the Speaker in a fight in protest.

This resulted in sporadic gunshots by security agents while security details whisked the Speaker away.

Njoku (APC Ihitte Uboma), a member of the dissolved Ethics, Privileges and Information Committee, said their alleged misconduct was never brought to the committee.

Njoku told reporters he will continue to attend plenary sessions as his suspension is invalid and undemocratic.

Arthur Egwim (APC Ideato North) added that the Speaker did not follow the proper procedure in removing him as Chief Whip.

He stated that there were no valid grounds for his removal as no petition was brought against him and there was no existing case of proven misconduct.

Uche Ogbuagu (APC Ikeduru) maintained that no Executive session was held as the members had been waiting for the Speaker to announce the venue for the executive session.

In spirit of fair hearing, an adhoc committee has been set up by the Speaker Rt. Hon. Paul Emezien to hear the appeals of the suspended members against their suspension.

The adhoc committee members have the Deputy Speaker — Rt . Hon. Amarachi Chyna Iwuanyanwu as the Chairman and Hon Johnson Duru as Vice Chairman.