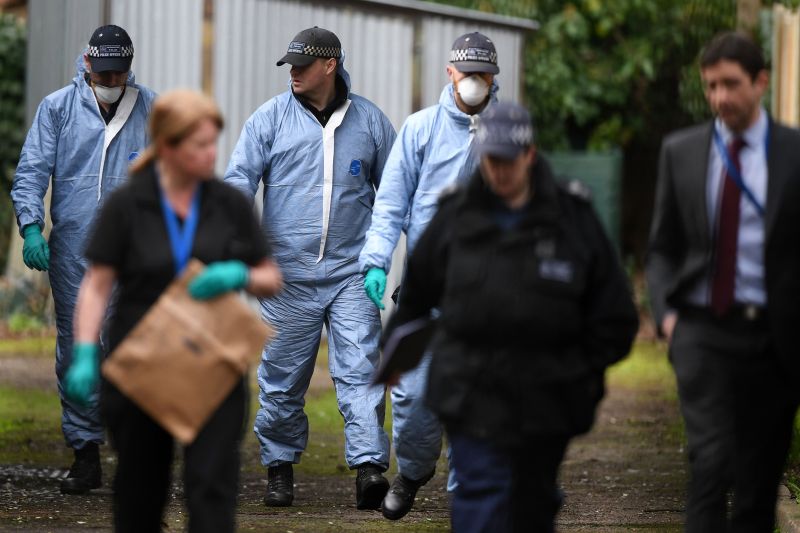 Police officers conduct a search of a bail hostel in south London on February 3, 2020, after a man was shot dead by police on Streatham High Road on February 2, following reports he had stabbed two people. - British police were searching two homes on Monday after shooting dead a convicted terrorist who knifed two people in a London street. Sudesh Amman, 20, who was wearing a fake suicide vest, was shot on a busy road in south London on Sunday after what police said was an "Islamist-related" incident. (Photo by DANIEL LEAL-OLIVAS / AFP) (Photo by DANIEL LEAL-OLIVAS/AFP via Getty Images)

This week’s attack in Britain shows there are big differences among religiously motivated radicals.

Was Sudesh Amman, the 20-year-old who on Sunday stabbed two people in south London before being shot dead by police, a terrorist? He had previously been convicted under terrorism laws, and he was wearing a fake suicide vest when he was killed, so there is a strong case for thinking that he was. But the botched and desperate nature of his attack, coupled with his obsession with martyrdom, suggest that while he may be classified as a terrorist, he is certainly not a conventional one. Instead, he is emblematic of a new and growing type of jihadi: the individual who embraces suicide not as a means to further a political cause but as an end in itself.

The the little we know about Amman is disturbing enough: He was released from prison about a week prior to his death after serving half of his sentence of three years and four months for terrorism-related offenses. He was under active police surveillance at the time of the attack, suggesting that the authorities were not entirely serene about his early release. Trending Articles

The terrorism offenses for which Amman was convicted in 2018 did not relate to actual acts of terrorism, but they were serious: He had disseminated jihadi propaganda on WhatsApp and on social media, sent beheading videos to his girlfriend, and downloaded documents that contained information on how to make bombs. And he had expressed a desire to die in a martyrdom operation.

What else do we know? We know that he had an infantile imagination, unmoored from any sense of reality. In a notebook recovered by the police in 2018, among the four “goals in life” that the 18-year-old Amman had itemized, No. 3 was to “have fun with all my hoor al-ayn.” This was a reference to the shag-fest that some jihadis believe is in store for them once they have died and been admitted into paradise. In No. 4, Amman writes: “Party with my brothers and my mother in jannah [heaven].” There is something tragically sad about wanting to die so as to rock out with your mom at a never-ending party: It is certainly not befitting of a hardened jihadi.

What we don’t know is why Amman did what he did: Was his primary motive to kill, or was it to die? And why did he act when he did, at the precise moment he did? Why launch an attack in a suburb of London on a dreary Sunday in February?

The fake suicide vest he had made and worn suggests that he wanted to die, knowing that the police would almost certainly kill him on discovering it—but why did he want to die? To advance the cause of jihad, as he saw it, or because he didn’t want to live anymore but had to theologically justify it as a martyrdom operation? (Suicide is a grave sin in Islam.) Had he really wanted to kill, one would have expected that he would have done so—his two victims have been treated for their injuries—and with greater planning and lethality. To the degree that there was any planning, it seems that most of it was invested in producing the fake vest. (Do jihadis lovingly don these vests in front of a mirror, in the manner of Travis Bickle, before they launch their operations?) The knife he used in the attack he had stolen from a store just seconds before putting it to work, which suggests that he hadn’t thought very hard about this aspect of his venture.

There was nothing really strategic about Amman’s attack. It doesn’t seem that he wanted to coerce the British government into doing anything or to protest against a recent British policy or to further a particular, real-world grievance. More likely, it seems that he was enacting some sort of psycho-religious drama of his own creation and for his own private purposes. Perhaps his core aim was to theatrically stage his own death as a martyr to his faith. Quite what led him to this is anyone’s guess right now.

In a book on religious terrorism, Terror in the Mind of God, published nearly 20 years ago, the sociologist Mark Juergensmeyer suggested that much of what we call terrorism (that is, violence against civilians for ostensibly political purposes) is rooted in humiliation, and that by engaging in public displays of violence terrorists shake off feelings of shame and impotence. According to this view, terrorists are more fantasists than strategic masterminds, imagining themselves as righteous combatants in a “cosmic war” of good versus evil.

This doesn’t always speak to the leaders of terrorist groups or the professional foot-soldiers who have a vested interest in doing terrorism and prolonging violent conflicts. But it does seem to apply to those on the periphery of violent groups and those who feel a keen personal need to be heard and seen and, above all, validated. It almost certainly applies to socially and morally isolated people like Sudesh Amman, who, when he was younger, had reportedly boasted how he wanted to become a terrorist. Amman, who was already a disturbed fantasist prior to entering prison, would not have enjoyed cloudless mental health in lockdown and seems to have grown more resentful and unhinged as his time inside passed. The British authorities were seemingly unable to do anything about this.

What do we do about people like Sudesh Amman? There is a certain kind of naive liberal who believes that if only we loved him more, brought him more closely into our world, and helped him feel better about himself, then he would come round to our way of thinking and be a productive citizen. If only Amman had been given the opportunity to, say, develop his creative writing skills or to voice his truth then, perhaps, he would have stood a better chance at resisting the lure of radicalization (as if he had no agency in the matter); then, perhaps, we would be safer. This is of course a dangerous delusion: a refusal to accept that some people are murderously opposed to liberal convictions on principle.

The harshest judgement against Amman will probably come from within the jihadi fold itself. Amman’s actions, though generating publicity, did not create a spectacle worthy of veneration or awe. But, more crucially, he didn’t kill anyone. Sheikh Hussein Fadlallah, who was Lebanon’s most prominent Shiite cleric, stipulated that suicide attacks were legitimate “provided that the greatest number of enemies would be killed by them.” He did so to distinguish genuine acts of selfless martyrdom from self-centered suicide; as the sociologist Diego Gambetta puts it, referring to this theological debate, “In Fadlallah’s view the only evidence one can offer that one is not throwing one’s life away is the number of people one kills and the devastation one causes.”