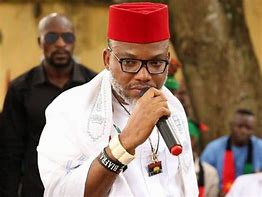 The Indigenous People of Biafra (IPOB) led by Mazi Nnamdi Kanu has debunked reports that it linked Senator Patrick Ifeanyi Ubah and Governor Nyesom Wike of Rivers State with the abduction of their leader.

IPOB made the remarks in a statement signed by its Media and Publicity Secretary, Comrade Emma Powerful.

In the statement, Comrade Powerful asked IPOB followers to disregard the fake news and told Senator Ifeanyi Ubah’s political opponents to try other ways of settling scores with him and leave IPOB and Nnamdi Kanu out of it.

“The attention of global movement of the Indigenous People of Biafra (IPOB) ably led by our great leader, Mazi Nnamdi Kanu has been drawn to the false and malicious press statement and audio being circulated, and purported to have been issued by our Media and Publicity Secretary, Emma Powerful.

“In the said statement, Powerful was quoted as accusing Senator Ifeanyi Ubah and Gov. Nyesom Wike of colluding with the enemies and facilitating the betrayal and abduction of our leader, Mazi Nnamdi Kanu in Kenya.

“We therefore, wish to dissociate with the fake statement being peddled by agents of confusion.

“Our Publicity Secretary never at any time linked Senator Ifeanyi Ubah or  Gov. Wike with the wicked betrayal of our leader, Mazi Nnamdi Kanu.

“If they were involved in the dirty deal, our investigations into the matter will reveal it, but for now, we have no evidence to link them with the atrocity.

“IPOB does not act based on speculation or rumour. Our assertions are evidence-based and products on credible intelligence.

“We therefore, warn unscrupulous elements and ‘One chance politicians’ using the name of IPOB’s Media and Publicity Secretary to dish out fake press statement to stop such criminality immediately.

“Those behind this evil should know that we will unravel their identify. They can’t hide for too long.

“They will incur the unmitigated wrath of IPOB if they don’t stop this nonsense.”

IPOB indicted President Uhuru Kenyetta of Kenya, Nigeria’s Ambassador to Kenya, Kenyan’s Ambassador Willfred Machage to Nigeria in the abduction, as well as the Nigerian Government.

“For the benefit of doubt, IPOB has only linked the betrayal and abduction of our Leader Mazi Nnamdi Kanu to President Uhuru Kenyetta of Kenya, Nigeria’s Ambassador to Kenya, Kenyan’s Ambassador willfred Machage to Nigeria, and the Nigerian Government.

“Other collaborators in this heinous crime will be made public based on incontrovertible evidence.

“But for now, we restate that Senator Ifeanyi Ubah has not been found to have any hand in it.

“His political opponents should try other ways of settling scores with him and leave IPOB and our Leader Mazi Nnamdi Kanu out of it.

“We must trace those behind this and they will regret their action for dragging IPOB into the zoo’s politics and for impersonation.

“We therefore, urge members of the public to disregard the said fake press release and shun any purported statement from IPOB that is not from a credible source or our usual channels,” he concluded.