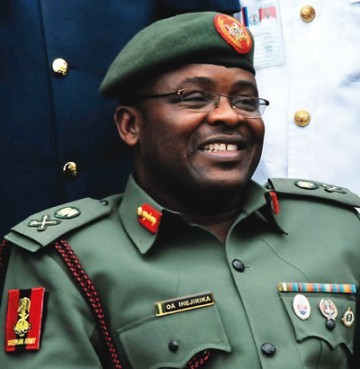 A former Chief Of Army Staff, Azubuike Ihejirika, on Thursday said that war was not an option over the insecurity bedevilling the country.Ihejirika who spoke with journalists during the visit of the Chief Of Defence Staff to Owerri, Imo State, said that he was advocating dialogue as a strategy to returning peace to the country.

The CDS, Lucky Irabor, was in the state to meet with retired senior military personnel who are from the South-East zone to proffer solutions to the insecurities in the region nay the country.Ihejirika advised the federal government to go to a roundabout with groups who were aggrieved with the system.

He said that it was internationally acceptable for government to dialogue with opposing groups than to take to war.He said that he was supporting any approach that would ensure maximum peace and order in the country.

The ex-COAS said, “All over the world, it is better to jaw-jaw than to war-war. It is important for government to go for dialogue. I stand for the approach that would ensure peace in our country.”

On his part, Irabor said, “I am honoured to see very respected retired senior military personnel, especially my former boss, Lt General Azubuike Ihejirika here. You are the most critical stakeholders in our quest to ending the imbalance in our country.”