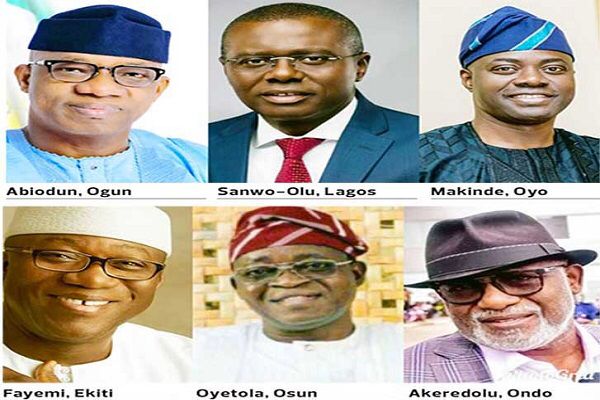 The Southwest states of Ekiti, Lagos, Ogun, Ondo, Osun and Oyo may team up to present a common front on the collection of Value Added Tax (VAT), it was gathered Saturday night.

Some other states, including Kaduna, Delta, Enugu and Cross River, are reviewing development of the last few days on the matter especially Friday’s ruling of the Court of Appeal which requires parties in the VAT dispute to stay action pending the resolution of all legal issues in contention.

Sources said yesterday that Houses of Assembly in the Southwest are currently discussing how they could present a common front on the collection of VAT.

The discussions are being held by the Majority Leaders of the assemblies under the auspices of the Southwest Legislative Reforms and Implementation Committee (SLRIC).

The committee, according to a source, has resolved to discuss and work out the legal frameworks of how the states will react to the ongoing dispute over VAT collection as well as the implementation of the resolutions across the zone.

One of the key players in the talks said: “All the state assemblies in the Southwest are poised to toe the path championed by Lagos State House of Assembly.

“I can confirm to you that the issue is being handled by a high powered legislative committee established to ensure common fronts to all issues of common interest in the zone. The VAT matter is one of such issues and we are discussing it.

“The committee has started discussing the issue and we are coming out with a common position on the matter. What Lagos has done as usual is to blaze the trail.”

Responding to Appeal Court’s order that status quo be maintained on the issue,the source said: “this whole uproar is not just about collecting VAT but discussing, understanding and implementing the issues being raised about the matter correctly.

“We, as lawmakers, will not just act without considering the implications. That is why we are threading the honourable path of legislation. Lagos has started it as usual and I can tell you other states in the Southwest will follow suit. Not fewer than three other state assemblies have commenced the process of legislating on VAT as it concerns their states.

“As legislators, we will do the needful irrespective of whatever the status quo is. We know what the law says and we understand what the issues are. Without being sentimental, we are dissecting the matter and gradually, we are bringing out the various complications to be addressed. At the end of this whole uproar, I believe we will arrive at a common position nationwide.”

A separate source told The Nation in Akure yesterday that the Ondo State government might join Lagos and River states in the battle to collect VAT.

A top government official said plans were on to send a bill to the State House of Assembly on the matter.

The source stated that Governor Oluwarotimi Akeredolu was ready to support any move to increase government finances.

Another official said the Ondo governor was waiting for the final decision by the Supreme Court before making a move.

Ondo Commissioner for Information and Orientation, Donald Ojogo, could not be reached for comments.

The Kaduna State government said it is studying the case at the Court of Appeal with a view to understanding its impact and ramifications for effective revenue collection.

It said it remains a champion of true

true federalism, anchored on significant devolution of powers to the states, including fiscal responsibility.

He said: “the Kaduna State government is a champion of true federalism, anchored on significant devolution of powers and responsibilities to the states.

“This includes fiscal federalism as an essential element of effective federalism. That is why Kaduna State has also focused intensely on expanding its internally-generated revenue.

“The Kaduna State government is studying the VAT judgment to understand its details, impact and ramifications for effective revenue collection. The conclusions of this study will inform the next steps for the state.”

In its own reaction to the VAT controversy, Peoples Democratic Party (PDP) youths under the auspices of PDP National Youths Movement, said it is gross injustice to deny states like Lagos and Rivers the full benefits of revenue generated by them.

The youths, in a statement by their President, Salahudeen A Lukman, said: “Since there is pegged monthly allocation coming from federal purse not determined by amount contributed by federating states, many governors are more than lazy in contributing to the pool of funds expected to be shared at the month end but sharp to claim glory for humongous voting figures during every general election.

“It is time to end the unfair sharing of allocation; the time is now to stop laziness of many state governors.”

The Enugu State government plans to take a decision on whether to align itself with the move by Rivers and Lagos States to assume control over collection of VAT.

Information Commissioner Chidi Aroh, told The Nation on phone that the state executive council would meet this week to take a decision on the matter and advise Governor Ifeanyi Ugwuanyi appropriately.

He said: “I hope you know that matter is still in court. So, it will be inappropriate for us to discuss a matter that is currently before the court.

The Delta State Government is also studying the situation, according to Information Commissioner, Charles Aniagwu.

His words: ” For us we will always believe in the rule of law. There has been a judgement in Rivers State.

“Although, we did not go to court, we will study the situation and know what steps to take. We will always support anything that flows in line with the law.

The Igbo National Movement (INM) says the present arrangement whereby the Federal Government collects VAT is not in the best interest of Nigerians.

National Convener of INM, Anthony Okolo, said in Owerri that the recent stance of Governor Nyesom Wike of Rivers State on the VAT issue is an eye opener.

“It cannot also be viewed as justice to deny a state that has spent millions in developing planned neighbourhoods and estates the full value of their investment under the guise of remittance of Value Added Tax to the Federal Government that has neither spent a dime on development of that neighbourhood, nor is committed to returning the value remitted to it, back to the state for re-investment in more infrastructure.

The Cross River State government is undecided on which way to go.

Commissioner of Finance in the State, Mr. Asuquo Ekpeyong, only responded to enquiry over the position of the state government by simply replying with a news post showing the decision of the Court of Appeal on the matter, which urged that parties should maintain status quo.

When asked the implication of his reply as it relates to the position of the state government, he did not reply the message nor answer calls made to his phone.

For Governor Douye Diri of Bayelsa State, part of his complaints is the decision of international oil companies (IOCs) to continue paying their employees’ income tax to Lagos State where they have their headquarters as against the states where they extract oil.

Speaking at the second edition of the Nigerian Content Development and Monitoring Board (NCDMB) Research and Development Fair, Diri said the IOCs should stop citing insecurity in the oil producing states as reason for their action.

He said: “Bayelsa State government still feels short-changed, in terms of what we are getting from the oil and gas industry, despite the efforts we are making to ensure peace and tranquility in the industry.

“We believe the relocation of the IOCs to Bayelsa state should not be further delayed.

“This is a pronouncement by the Vice President of our country, Prof Yemi Osinbajo, some three or four years ago. So, we believe the time for its manifestation has become very necessary.

“We strongly feel it is unfair for the IOCs to carry out their operations in Bayelsa, yet the PAYE income tax is collected in Lagos. That is a case of somebody eating the beans and asking another person to have diarrhoea.”

The governor was represented at the event by his deputy, Lawrence Ewhrudjakpo.