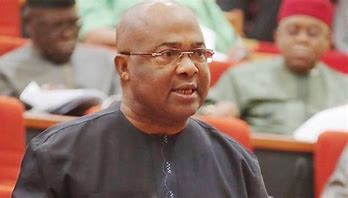 The former governor of Imo state and the Senator representing Imo West Senatorial district, Rochas Okorocha, on Tuesday, said the current governor of the State, Hope Uzodimma, does not believe in the state.

Okorocha stated this in Owerri, through his Special Adviser on Media, Sam Onwuemedo while replying to Uzodimma’s statement that he (Okorocha) wanted the commission of enquiry on land to be disbanded.

The former governor described Uzodimma’s statement as blackmail and was aimed to petition him at the Economic Financial Crime Commission, EFCC.

According to Okorocha, “In a lengthy question and answer interview, written in Government House Owerri and sent to media establishments to publish, Gov. Hope Uzodinma claimed that Senator Rochas Okorocha had asked him,  to “disband the Commission of inquiry set up by Emeka lhedioha.

“Gov. Uzodinma only proved us right. He simply confirmed what we have been saying.

“We have been telling those who cared to listen that, Uzodinma does not believe in Imo State and her people.

“He has no passion for the state.

“A man who had been a senator for eight years and who had been aspiring to govern the state since 2003, was proud to say that he has no property in the state except the one land he bought from a family.

“He, on his own, admitted that he has no investment in the state and no Imo man or woman is in his employment.

“Long before his Governorship, Okorocha had big-time investments in Owerri and other parts of the state, including schools, hotels, Housing Estates, Printing Press, and so on. Even where he is living now in Owerri known as Sipbat, he bought it in the early 90s. That’s how patriotic citizens should be.”

“Uzodinma should face governance and leave Okorocha alone. And he must have known that nobody takes him serious again over his needless attacks against Okorocha.

“He has been using Okorocha to divert attention from the woeful failure of his administration to take one correct action since he came on board.

“Okorocha is not behind his failure as governor. Let him carry his cross or burden and leave Okorocha alone,” Okorocha said.