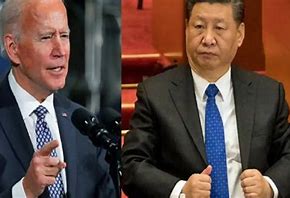 The recent visit by the US Deputy National Security Advisor, Jon Finer,  and the letter sent to President Muhammadu Buhari by the Chinese President Xi Jinping, have triggered debate among Nigerians.

Many view their coming/patronage as either coincidence or a way of preparing a battleground of influence in the most populous African nation – Nigeria.

The US Deputy Security Adviser, when he met the Nigerian government officials, led by Vice President Yemi Osinbajo, affirmed the importance of US-Nigeria relations and underscored their shared commitment to democratic values.

He, among other things, discussed with the vice president, the Build Back Better World (B3W) initiative, which he described as “a values-driven, high-standard, and transparent G7 infrastructure partnership”.

Two days after Mr. Finer’s visit, a statement by the Special Adviser to President Muhammadu Buhari’ on Media and Publicity, Femi Adesina, referred to a letter to his boss by the Chinese president, which seeks to bolster relations between Nigeria and China.

The letter quoted Xi as saying, “Nigeria is an important strategic partner of China in Africa. China-Nigeria cooperation has been the pacesetter of China-Africa cooperation,’’

He explained that the Chinese leader said he attached great importance to the development of China-Nigeria relations, and assured President Buhari that his country would spare no effort in strengthening existing relations.

The BW3 and China BRT initiatives

The Build Back Better World (B3W), is a global initiative announced months back by G7 countries at their 47th summit, aimed to offer a better alternative to China’s Belt and Road Initiative (BRI) to developing countries.

Apparently, the G7 joined forces to counter the BRI after the members of the bloc realised they may not be able to beat the communist project individually.

While the Chinese BRI was launched in 2013 to develop land and sea infrastructure that would link Asia, Europe and Africa to China, the BW3 initiative is seen as a centrepiece of G7 fight back.

What do the two initiatives have to offer?

The BRI project is already making an impact in many countries that China consider strategic in clearing its path to a possible world influence.

According to a document of the Permanent Mission of the People’s Republic of China to the United Nations office in Geneva, as at March 2019, China has signed 173 cooperation agreements with 125 countries and 29 international organizations under the BRI framework.

So far, in Africa alone, 46 countries and the African Union Commission have inked agreements with China and many Chinese engineers and technicians are at various positions in Africa, facilitating the construction of more than 1,100 cooperation projects in the continent.

Meanwhile, the BW3 initiative has just come on board, with President Biden saying the G7 rivalry plan, “Build Back Better World” (BW3), will collectively provide $40 trillion dollars for infrastructural development for low and middle income countries.

The plan, which is yet to take off, will also be global in scope and has different geographical orientations but, the focus will be on mobilizing the capital in four key areas: climate change, health security, digital technology and gender equity.

An international analyst, Ambassador Dauda Danladi, told Daily Trust that his last check revealed that China has invested over $2 trillion dollars in Africa. “What the G7 is trying to do is to see that it does not allow China overtake it in Africa.

“For instance, China is leading in the provision of infrastructure in Nigeria and has become a solid ally to Nigeria. So, China is now establishing a robust footprint in Africa and G7 members will not fold their arms and see their former colonies being gradually taken over by China.

“The portfolio of China investment in terms of infrastructure and soft loans to Africa is huge. I remember the summit that was held two years ago, China hosted heads of government of Africa and put on the table over $60 billion soft loans that African countries can draw and commit in some key areas of investments.”

Danladi said the competition should be encouraged by Africans, “because it is healthy for us. If the G7 started this competition with China, that will open up a huge space and opportunities for African countries and close a thin line of development.”

However, some analysts who viewed this plan as exciting raised a fundamental question: “Who will pay the BW3 initiative bill?”

An analyst, Alhaji Ahmadu Ibrahim, said a few months back, America had the challenge of fulfilling some of its financial commitments, and the Biden administration still has some domestic infrastructure bill to finance.

“So, the big question is, how will the US be able to solve someone else’s problem if it is striving to address its own?”

How committed are members of the G7 countries?

To make things doubtful is the fact that other G7 nations have keyed into the initiative but haven’t revealed how much capital they would allocate. And, would they risk their huge trade and investments deals with Beijing for Washington? There is no guarantee.

In 2019, Italy joined the Belt and Road Initiative and today it stands as a larger beneficiary of Chinese investment. Then we have Germany, which faces the 5G dilemma, in December 2020, Angela Merkel struck a deal with China’s HUAWEI despite opposition.

The United Kingdom too is on treacherous terrain. Some months back, the UK business department turned down a draft of recommendations to get tough with China.

According to a Reuters report, Joe Biden had forced the G7 leaders to make strong statement on China. But, there was a spectrum of how far the different countries are willing to go.

All of this put into doubt how serious G7 nations are to the B3W cause. They may have hardened their attitudes toward China but, whether they will put their money there remains to be seen.

The American strategy will have to deal with the fact of different interests and insecurities.

Now, Biden is widening his call for support against China, therefore forming a coalition of democracies against China.

Weeks back, President Joe Biden said he will convene a Democracy summit to deliver his campaign promise: a first-of-its kind gathering of more than 100 countries to check democratic backsliding and erosion of rights and freedoms worldwide.

Biden announced in his first foreign policy address as president in February that the United States would return to global leadership under his tenure to face down authoritarian forces led by China and Russia.

This is seen as another plan to fight China, which the G7 accuses of stifling democracy.

In an exclusive interview with Daily Trust, the United States (US) Ambassador to Nigeria, Mary Beth Leonard, said President Biden’s summit, will come in two parts: there will be a virtual part on December 9 and 10, 2021, at which countries will come together in the spirit of aspiring for a better democracy.

“You know, the United States is not claiming to be a perfect democracy; far from it. We have had significant challenges toward democracy even in the last year or so. So, the question is to come together as those who aspire to be a better democracy and talk about how we may do that.

“There will be the first summit in December, at which everybody will get up and say what the big plan is to help perfect their democracies. And then, there will be an in presence summit later where people will discuss what progress they have made.

“So I think it is true for Nigeria and Africa as it is for the United States and these are important areas to look out for and to figure out how we can tackle them. We look forward to seeing these conversations play out and I think it is a great initiative,” she said.

On Monday, the Chinese Ambassador to Nigeria, Cui Jianchun, had called on the ruling All Progressives Congress (APC) and opposition Peoples Democratic Party (PDP) to learn from the Chinese Communist Party’s experience for the development of Nigeria.

The envoy made the call during an interview with newsmen, shortly after a conference hosted by the Chinese Embassy. The All Progressive Congress (APC) attended while principal officials of the International Department of the Central Committee of Communist Party of China (IDCPC) also participated virtually. The ambassador noted that all the political parties in Nigeria, especially the APC and PDP, have a lot to benefit from the thoughts and theories of the CPC, which have led China to economic, political and technological development.

He advised the political parties to think outside the box and do something to develop the capacity of governance in the Nigerian nation.

“Nigeria should not lose confidence over the challenges as long as it can find its own way of developing the nation.

“Every nation has to find its own way, you can’t say I copied a US model, France model, UK model, Chinese model or whatever model. So, you have to understand why we uphold our Chinese past,” he added.