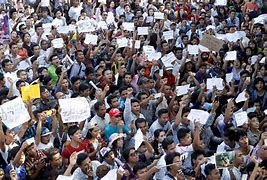 The United Nations on Tuesday excoriated the use of violence against anti-coup protesters in Myanmar, after police fired rubber bullets and tear gas to disperse rallies.

“The use of disproportionate force against demonstrators is unacceptable,” Ola Almgren, the UN resident coordinator and humanitarian coordinator in Myanmar, said in a statement.

Police in Myanmar shot rubber bullets at protesters and fired gunshots into the air today as crowds defied a military ban on rallies and took to the streets to a fourth straight day to rage at last week’s coup d’etat.

Witnesses described police firing warning shots into the sky before aiming at protesters with rubber bullets, with some people injured in the melee in the capital Naypyitaw where police also fired a barrage of water cannon.

The military has banned gatherings of more than five people in the commercial capital Yangon and other protest hotspots, as well as imposing a night-time curfew, but fresh protests erupted in various places on Tuesday.

It came after junta chief General Min Aung Hlaing made a televised speech on Monday night to justify last week’s seizure of power – claiming that things would be ‘different’ from the army’s previous 49-year reign.

The general claimed that the seizure of power was justified because of ‘voter fraud’ at a November election in which Aung San Suu Kyi’s party, the National League for Democracy (NLD), had won in a landslide.

Shortly after last Monday’s coup, the military announced a one-year state of emergency and promised to then hold fresh elections.

‘After the tasks of the emergency period are completed, free and fair multi-party general elections will be held according to the constitution,’ the general claimed.

But the military also issued threats, releasing a statement on state TV warning that opposition to the junta was unlawful.

‘Action must be taken according to the law with effective steps against offences which disturb, prevent and destroy the state’s stability, public safety and the rule of law,’ said the statement read by an announcer on MRTV.

“I will assure victory for PDP at the general election.”_ Valentine Ozigbo