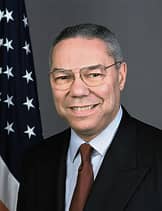 Colin Powell, the first Black U.S. secretary of state whose leadership in several Republican administrations helped shape American foreign policy in the last years of the 20th century and the early years of the 21st, has died from COVID-19 complications, his family said on Facebook. He was 84.

According to a statement by his family, he had been fully vaccinated against COVID-19.

“We have lost a remarkable and loving husband, father, grandfather and a great American,” a statement said.

“We want to thank the medical staff for their caring treatment,” it added.

A source familiar with the matter said Powell had multiple myeloma, a cancer of plasma cells that suppresses the body’s immune response. Even if fully vaccinated against COVID-19, those who are immunocompromised are at greater risk from the virus.

George W Bush was among the first to pay tribute, saying that Powell was “a great public servant” who was “such a favorite of Presidents that he earned the Presidential Medal of Freedom twice. He was highly respected at home and abroad. And most important, Colin was a family man and a friend.”

“Powell was a true American patriot who served our nation with distinction in uniform, as a four-star general, National Security Advisor, Chairman of the Joint Chiefs and as 65th Secretary of State,” Pence said on Twitter.

Former Secretary of State, Madeleine Albright, said in a statement that he was an American icon whose career in public service will always be celebrated and remembered.

“But to me, he was simply my friend Colin,” Albright added. “Although we grew up in different contexts, we bonded over our family’s immigrant stories, our deep love of America, and our belief in the importance of public service.

“He was a wise and principled man, a loyal friend, and one of the kindest people I had ever met.”

“I’m deeply saddened to learn that America has lost a leader and statesman,” Mr Cheney said. “General Powell had a remarkably distinguished career, and I was fortunate to work with him. He was a man who loved his country and served her long and well.”

Mr Cheney cited their work together during the Gulf War but failed to mention the war in Iraq.

“Powell was a trailblazer and role model for so many: the son of immigrants who rose to become National Security Advisor, Chairman of the Joint Chiefs, and Secretary of State,” Mr Cheney said. “His legacy and unparalleled record of service will never be forgotten.”

Secretary of Defence, Lloyd Austin, has said that he “lost a tremendous personal friend and mentor”.

Powell was a former top military officer who rose to become the first African-American secretary of state in 2001 under Republican George W Bush.

Powell, a moderate Republican who broke with his party to endorse Barack Obama in 2008, became a trusted military adviser to a number of leading U.S. politicians.

Powell was a distinguished and trailblazing professional soldier whose career took him from combat duty in Vietnam to becoming the first Black national security adviser during the end of Ronald Reagan’s presidency and the youngest and first African American chairman of the Joint Chiefs of Staff under President George H.W. Bush. His national popularity soared in the aftermath of the U.S.-led coalition victory during the Gulf War, and for a time in the mid-90s, he was considered a leading contender to become the first Black President of the United States.

But his reputation would be forever stained when, as George W. Bush’s first secretary of state, he pushed faulty intelligence before the United Nations to advocate the Iraq War, which he would later call a “blot” on his record.

He became a trusted military adviser to a number of leading U.S. politicians. And, despite his own misgivings, he helped swing international opinion behind the 2003 invasion of Iraq.

Though Powell never mounted a White House bid, when he was sworn in as Bush’s secretary of state in 2001, he became the highest-ranking Black public official to date in the country, standing fourth in the presidential line of succession.

“I think it shows to the world what is possible in this country,” Powell said of his history-making nomination during his Senate confirmation hearing. “It shows to the world that: Follow our model, and over a period of time from our beginning if you believe in the values that espouse, you can see things as miraculous as me sitting before you to receive your approval.”

Powell was born in Harlem, New York City, on April 5, 1937, the son of Jamaican immigrants.

His parents originally pronounced his name with a short “o” in the traditional English way, but he changed the pronunciation in honour of a U.S. Army Air Corps pilot, Colin Kelly, who was killed shortly after Pearl Harbor.

He was, by his own admission, an average scholar who left high school with no positive career plans.