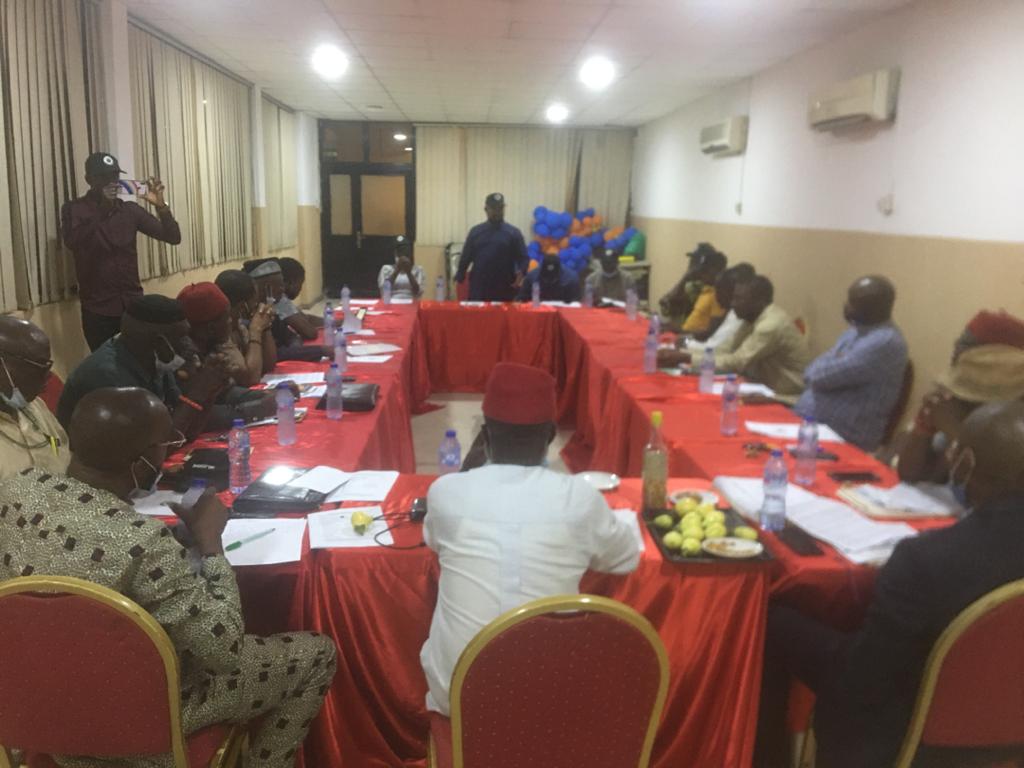 The meeting commenced with the welcome remarks by Chief Bar Arua, the FCT Ohaneze Indigbo President who appreciated the Mandate Team for their presence and their continuous efforts in reaching out and making Peace.

He went further to perform the traditional Igbo Culture of breaking of the Kolanut which is the symbol of unity of the IGBO’s.

The Mandate Team led by the Pioneer Convener opened the floor by introducing the FCT Exco’s and went further to highlight the reasons behind the Mandate’s Visit to the Ohaneze Indigbo in FCT.

In his speech, the Convener started by appreciating the FCT Chapter of Ohaneze Indigbo for the good works she had begun by enlarging it’s Committees in areas of Security, Peace and reconciliation, Politics and more. It is a welcome development.

In his words, “The unity and togetherness of Indigbo’s can never be over emphasized because the IGBO’s are the bridge builders and without the IGBO’s there couldn’t be much Development in any part of the Country or the World. The IGBO’s are Peacemakers and we love our neighbors anywhere we find ourselves, we are more Nomadic in lifestyle and nature as it is not with animals but in crisscrossing every Nook and crannies of the world with ideas of businesses, economic and materials resources than every other tribes in Nigeria.
IGBO’s adapt, develop and empower every Communities they come in and also leave in Peace, reason why they are assumed to be more superior in nature”.

The begining and growth of any economy in the Globe is with the presence of IGBO’s, be it Academia and other Professional Services. In Nigeria, the IGBO’s are the Economic Powers of the West in terms of revenue generation. In the North, South and the Central where virtually every giant and big business are owned and developed by IGBO’s. Be it in Hospitality and Businessess, Markets, Schools, Infrastrural development and the rest of them.

It was an igbo Man at the forefront in the 60’s that fought for the independent of Nigerian, till date No Igbo Man has led the Country at the topmost Position as President in this Democratic era.

The Mandate Team who’s mission and aim is to challenge the sensibility of our people towards harnessing our collective intelligence to synergize the politesse which should see a SouthEasterner freely and popularly elected President in the immediate next dispensation is not going about begging for Presidency come 2023, rather is doing the needful in reaching out, negotiating and at the same time seeking for Justice, Equity and fairness. This will bring to an end the manifest marginalization of the SouthEast in the topmost leadership position. It will also bring to a close the Civil War Mentality in Nigeria which has lingered for above 50 years since the end of hostilities and engender Unity”.

He Charged the President and his Exco’s to go all out and make the SouthEast Proclamation known to all and sundry, that His office is like that of a sitting President who’s location at the center of FCT is that which is to be reckoned with and taken more importantly in Decision making.

He further advised Nigerian’s to Vote Igbo President (VIP) in 2023 which is her campaign Slogan and to also take opportunity of the upcoming Voters Registration exercise to update their records.

Speaking also at the meeting, the FCT Chairman, Hon Dimgba Samuel Chidi of the Mandate Team, represented by his Vice took his turn in a written speech to elaborate further on what the FCT Chapter brings.

South East 2023 Presidential Mandate is not a political party he said, socio- cultural and secession group or agitators; we are crusaders of equality and peace as a pressure Group.

We want to use this courtesy visit to present to the Ohaneze Ndigbo, our aims and objectives; amongst which are to demand, strive and represent the South East position in all of our national discuss in the weeks and months ahead of the build up into 2023 general election.

To think boldly about future possibilities and to recommend how we can achieve them.

Let me first express our respect for the value and influence the Ohaneze controls and we encourage the group among other challenges to properly re-examine viable options to ensuring peace and unity take a fundamental position at the floor of the Ohaneze Ndigbo Worldwide.

We want to challenge every Igbo stakeholders in their submissions to be well articulated, informed and updated concerning the position of the South East 2023 Presidential Mandate, for an overall robust, vibrant mass mobilization and support across the country.

We want to turn this courtesy visit from hope into reality of a South East 2023 Presidential Mandate for Nigerians and Nigeria.

Let me commend the FCT Chapter of the Ohaneze Ndigbo to formally receive the South East 2023 Presidential Mandate Team at a period when Nigeria is witnessing a new chapter of her nationhood.

The team strongly believe that the future of our demand will largely depend on our deliberations today.

Let me on behalf of the entire South East 2023 Presidential Mandate FCT Executive; appeal to the Ohaneze Ndigbo to partner and support this group and it’s course for speedy actualization of every fruitful deliberation which this courtesy visit shall facilitate, he Concludes.

In response, the Ohaneze President, thanked the Leadership of the Mandate Team, he expressed confidence with the Team and pledged to work with them. He said that going by the numbers of Growing Organizations and Agitators for the SouthEastern Presidency, he believes, the IGBO’s had made up their minds in the pursuit and that No going back for Igbo Presidency. He expressed with much courage the manner at which different groups go about getting the Presidency of Igbo Extraction that is good and it is a dream that has taken too long and which time has come.

He used the opportunity to advise Nigerian’s and all Political Parties to field in SouthEasterner’s as there Candidates in the next round of Elections and Prayed all Igbo Son’s and Daughters to begin to see each other as one, forgive and forget to come together for a better tomorrow.

On Chief Iroha’s part he advised our Sons and Daughters, father’s ad Mother’s to begin a reorientation drive in the use of Igbo in our discussions when we are together for the sake of our children, also he pointed out that when we come together, we shall Produce meaningful and productive achievements..

A Conversation with H.E. Hon. Uhuru Kenyatta, President of the Republic of Kenya