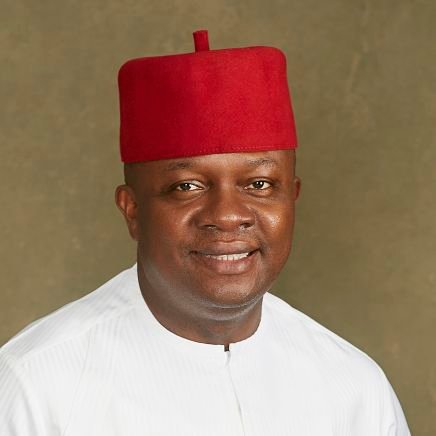 Valentine Chineto “Val” Ozigbo, born on the 20th of July 1970 is the immediate past President and Chief Executive Officer of Transnational Corporation of Nigeria plc (or Transcorp) a diversified conglomerate with strategic investments and core interests in the hospitality, agribusiness and energy sectors.He was appointed to the position in 2019.
Previously, Ozigbo worked as Managing Director and Chief Executive Officer of the Nigeria-based hospitality company, Transcorp Hotels Plc. Transcorp Hotels is the hospitality subsidiary of Nigerian conglomerate Transcorp. He also worked in the banking sector, gaining over 17 years of experience with NAL Merchant Bank, Diamond Bank, Continental Trust Bank, FSB International Bank, Standard Trust Bank, United Bank for Africa and Bank PHB.
As CEO of Transcorp Hotels, he oversaw the hotel’s expansion to other cities across Nigeria and a consolidation of its status as the leading hotel in the country. Under him, the company announced an N8 billion initial public offering (IPO) in 2014, which was oversubscribed.
Ozigbo served as Managing Director and Chief Executive Officer of Transcorp Hotels Plc. from October 2011 – December 2018. In this role, he provided strategic direction and drove the execution of key strategic goals of the company and its projects under management which included business expansion, merger and acquisition opportunities, business improvements, upgrade and renovations.
He was also responsible for developing five new projects worth over $500 million including two hotels in Lagos and Port Harcourt, a 5000-capacity conference facility, luxury apartments and the upgrade of existing hotels with additional retail facilities.

WHERE IS HE FROM?
Born in Umuomaku in Old Aguata, Orumba, Anambra South senatorial zone. He attended Christ the Redeemer College, a secondary school in Amesi, Anambra State, where he was an outstanding student, having represented the college in various quiz competitions. He later taught Physics and Mathematics at this institution while awaiting University admission.
He studied Accounting at the University of Nigeria, Nsukka graduating in the class of 1994, with the best result in both Accounting and Business Administration.
He obtained his MBA in Banking and Finance from the University of Nigeria, Nsukka in 2000 and an MSc in finance with distinction from the Lancaster University, United Kingdom in 2004.
Ozigbo has professional qualifications in accounting (The Institute of Chartered Accountants of Nigeria) which he obtained in 1998, Taxation (The Chartered Institute of Taxation of Nigeria) gotten in 2000 and Credit Administration (Institute of Credit Administration) which he bagged in 2015. He is a fellow of all these three institutions.
Ozigbo was a British Chevening Scholar in 2003–04. In 2003, he won a Chevening Scholarship to study Finance at UK’s Lancaster University, graduating in 2004 with a Distinction.
He has also participated in many international conferences including: the World Economic Forum at Davos (WEF) and the World Economic Forum on Africa (WEFA) in Nigeria; the African Development Bank annual meetings in China; the World Bank/ International Monetary Fund (IMF) annual meetings in Washington DC; Euromoney and Economist Conferences in London; Euromoney debates on Capital Flows to Africa in London; and SIBOS 2009.
In September 2018, he conferred the award of a Distinguished Alumni of the Lancaster University. The award was conferred on him at a special convocation ceremony of the university held at its Ghana Campus.
Ozigbo is the last child of Mr. Andrew Ozigbo (a retired school headmaster) and Christiana Ozigbo (a small businesswoman). He is married to Mary-Callista Ojiugo Ozigbo with whom he has three sons (Mario Obioma Ugochukwu, Chimdi Angello and Mitchel Chima) and one daughter (Valerie Chioma).

WHY HE SHOULD BE GOVERNOR
Ozigbo, no doubt, has exciting and very rich credentials in intellect and leadership, going by his antecedents. He is a highly distinguished entrepreneur, a philanthropist with a heart of gold, and business leader of note.There’s something about Ozigbo that rivets attention. His unique combination of leadership, competency and missionary zeal earmarks him as a man of impeccable vision. With a mind full of ideas and a can-do attitude, he radiates the level of positive energy that resonates with Ndi Anambra. His expertise on finance and economic matters position him, not only as the man to provide visionary leadership but also world class administration of Anambra state affairs.
The technocrat says he draws his inspiration from the exemplary leadership of two great leaders, Nnamdi Azikiwe and Michael Okpara, who massively transformed the fortunes of Igboland during their times.
The immediate past President and Group CEO of Transcorp Plc said both leaders made Igbo race the envy of the world.
Ozigbo attributed their achievements to great leadership skills, which he said could be surpassed in the present circumstances given that technology and knowledge had advanced.
The governorship aspirant described Peter Obi as a prudent leader who did tremendously well in office, as well as saved for the future generation of the state.He commended his giant footstep in education, healthcare, and infrastructural development which engendered the social and economic transformation of Anambra State.
“All of these and more are achievable now more than ever if we prioritize competence in leadership,” Ozigbo said.
“With every sense of humility, my intention for seeking elective office is to demonstrate the unlimited possibilities that can become a reality when the right people with the right heart get into public office. “We are living in a competitive world where you have to run faster than those ahead of you if you must catch up. And we are comfortable with being last and doing nothing. I said this because I don’t see sufficient hunger for the change. And this is part of what is driving me into going for politics.”
On his strategy to make Anambra successful, he said “By the Grace of God, I have set this noble purpose; I have crafted a high-powered vision around this big dream. I have been careful to ensure that this great vision resonates strongly with my people. I have developed strategies and a game plan to realize this purpose. I have also surrounded myself with competent people who buy into the grand vision. I have put only God first before the people I wish to serve. I have provided competent leadership for the people to organize around.”
“All we need to do next is deepen our grassroots engagement, and design the best-ever blueprint that will bring the transformation we need and endear us to Ndi Anambra. When the campaigns begin, we will present the blueprint to Ndi Anambra. For now, we are actively engaging the grassroots so that all we do will reflect the will of the actual power holders, the people.”
On his strategy to unify the party structure for a successful bid, he states that ” APGA takes its roots from the late Gen. Chukwuemeka Odumegwu Ojukwu, who founded the party. Today’s APGA was elevated to where it was because Peter Obi did wonders as a governor. This same transformational leader is now the leader of the PDP. And PDP has since taken over Anambra as it has in most of the southeastern states. A deeper refection of past political exercises will lead you to this conclusion. If you consider the fact that PDP dominates most of the Senate and House of Representative seats, you will begin to see why PDP has been popular.
PDP is in good shape and whatever may be left undone, in terms of unifying PDP, I will do my very best to achieve that totally. I will go beyond unifying PDP to unifying Ndi Anambra.”
On his position as a relatively new face in politics, he insightfully states “Undoubtedly, Anambra needs a breath of fresh air, and that’s one of the things I represent. It means I have not been part of the problem, and those whose only claim to fame is career politics cannot extricate themselves from the issues we currently face. That said, I am not new to politics. I am deeply rooted in the PDP and have made positive contributions to the party where I could in the past years. My role as a former chief executive officer, CEO, of Transcorp Hotels placed me in a unique position to understand politics in ways that hardly some elected offcials do.

Developing Anambra should take a holistic approach, but the most important thing to look out for is maximizing human resource capacity. I will soon unveil my blueprint. It will also include policy reforms and the strengthening of institutions of governance. We will embark on massive infrastructural projects that will be catalytic to developments, such as power, technology, ports, roads, and gas. Many other areas like agriculture, trade, and industry, will not be left out. We will take our key cities like Awka, Nnewi, and Onitsha, to the next level.
The poor will receive relief from unending struggles; the youth will have a renewed sense of empowerment and jobs; the women will have better access to healthcare and financing; the rich will get richer and help to pull others up, and businesses in Anambra will have higher chances of success than anywhere else. I want to make Anambra look fashionable for investors based on their success stories. The private sector will know that one of theirs is on the saddle to serve them and all.
Furthermore,he urged communities and leaders to embrace dialogue and consultations as the best mechanism for lasting peace. I know that the body and the tail follows the head so once the community leaders adopt dialogue .
On his vision for Anambra’s economy he said “In simple terms, we will place Anambra through the fastest path to sustainable development through collaboration and effective support of the private sector. We will raise the standard of living and run an inclusive government. We will enhance efficiencies and cut wastes. We will be creative, audacious, and purpose-driven. We will restore law and order and make Anambra the most competitive state in Nigeria for investors. We will leverage on technology to solve Anambra and the world’s problems, and we will transform and beautify Anambra for good. These and more will help us make Ndi (People) Anambra proud of their state, and we will be an example of an ideal world.”