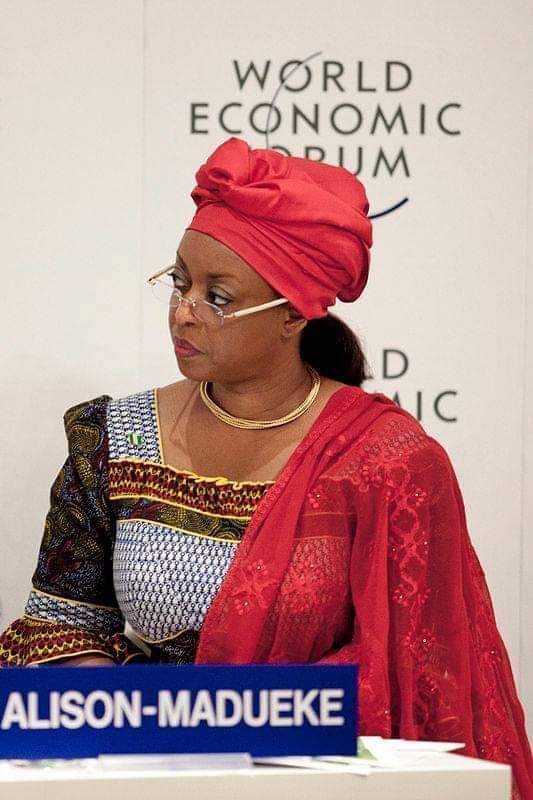 Is the intertwined complexity of power, politics and corruption the most difficult puzzle to solve in Nigeria? To begin with and as a backgrounder, in order to further have a deeper understanding about the intricate politico-economy of the oil industry in a nation like Nigeria; there exist a need to put in proper perspective the efficaciousness of governance in relation to economic prudence.

Signed into existence on April 22, 2010, by President Goodluck Jonathan, is the Nigerian Content Act which was designed to ensure that Nigeria achieves the much desired In-country capacity in the oil and gas industry aimed to increasing the percentage output of the petroleum industry. This was supposed to guarantee a huge chunk of the estimated $20 billion annual industry for the benefit of Nigerians and indigenous Nigerian Companies and Service Providers.

Who is Diezani Alison-Madueke?

Diezani Alison-Madueke was Nigeria’s former Minister of Petroleum and the first female Federal Minister for Petroleum Resources from April 2010 to 2014.
The female politician born on the 6th of December 1960, has held several significant positions in Nigeria and beyond. This woman has successively broken many records in the political and business industry.

As Minister of Petroleum Resources, Alison-Madueke pledged to transform Nigeria’s oil and gas industry so that all Nigerians benefit. During her administration as a minister of Petroleum, products Supply was sustained nationwide through a combination of offshore processing, SWAP arrangements and increased domestic refining. The first 100days saw the re-streaming of Kaduna Refinery and sustained operation of Warri refinery. Secondly, the issue of kerosene availability was tackled through NNPC direct distribution programme. No doubt  the integrity of key product pipeline infrastructure (Kaduna-Kano, Kaduna-Gusau, Kaduna-Suleja) were re-established with its impacts leading to more products availability  in inland depots. Over 70% improved capacity utilization of Warri Refinery was achieved as she successfully sustained efforts at increasing local refining capacity, revamping the existing refineries with a view to increasing their contribution to national demand of petroleum products / Greenfield refinery development. Effort at increasing the nation’s stock of crude received major attention under Mrs. Alison-Madueke with the escalation of oil exploration activities in the Inland Sedimentary Basins especially in the Chad Basin.  More so, there was a major enhancement of deepwater oil production which was achieved as a result of the arrival of FPSO Usan into Nigerian waters. On completion of the subsea wells and facilities tie-in, oil production sequentially increased by about 180,000 barrels per day.

However, it is said that Politics, Power and Corruption are inseparable especially in a nation like Nigeria.

At such positions of power, the simple values are sometimes most of what is needed to serve well but like many varying series of political crimes in Nigeria, several allegations were levelled  against Alison-Madueke  which began building when she was still the oil minister.

Stolen funds worth billions of dollars have been traced to her since 2015 when she left the office as the Federal Minister for Petroleum Resources. Consequentially, She has been charged with the responsibility for $20 billion missing from the Nigerian National Petroleum Corporation (NNPC) under her management. She’s been accused of awarding multi-billion Naira contracts without recourse to due process and of recklessly spending government funds as well as wasting billions of naira inappropriately on private jets and was officially charged to court by the Economic and Financial Crimes Commission of Nigeria for ‘Money Laundering’.

Alison is also part of a million-dollar fraud and money laundering offences in America. The US seized $144m of assets, one 200-foot yacht and a big house in Manhattan from Alison-Madueke.

The EFCC seized jewelries worth over $40 Million which they put for sale.

A $150 million belonging to her was also seized by the Federal High Court in Nigeria.

Alison-Madueke was arrested by the UK National Crime Agency as part of a top bribery and money laundering investigation in 2015. She has since remained in the UK over the crimes levelled against her by the UK court.

A few days to unveiling of the ministers of president Buhari’s administration, came the revelation of the president who added a portfolio to the hydra-headed responsibilities he is shouldering as president of the federation, his position as a minster of petroleum with the aim of taking charge of the nation’s crucial oil ministry with a minister of state running the day-to-day affairs in the sector drew attention.

During his electioneering, the main highlight of President Buhari’s “change” mantra was to ease the suffering of the citizens by providing them with infrastructures and making decisions that would make life comfortable for every Nigerian.

But has the oil industry noted significant changes since Buhari’s assumption to office as the current minister of petroleum resources thus far? Or has it undoubtedly led to lingering fuel scarcity with has pronounced diverse impacts on Nigeria and her citizens?

General Olusegun Obasanjo as Head of State appointed Buhari as the Federal Commissioner (position now called Minister) for Petroleum and Natural Resources in March 1976. During his tenure as the Federal Commissioner for Petroleum and Natural Resources, he was able to get government to invest in pipelines and petroleum storage infrastructures.

It was under his stewardship that the government built about 21 petroleum storage depots all over the country from Lagos to Maiduguri and from Calabar to Gusau; the administration, he served, constructed a pipeline network that connected Bonny terminal and the Port Harcourt refinery to these depots.

He equally worked to have the Obasanjo regime sign the contract for the construction of a refinery in Kaduna and an oil pipeline that will connect the Escravos oil terminal to Warri Refinery. At the time the Nigerian National Petroleum Corporation, NNPC, was created in 1977, Buhari was also appointed as its pioneer Chairman, a position he held until 1978.

Also in the General Sani Abacha military junta, Buhari was given the responsibility of chairing the Petroleum Trust Fund (PTF), a body created by the government and funded from the revenue generated by the increase in price of petroleum products, to pursue developmental projects around the country. He is believed to have gone about this responsibility genuinely and reasonably as the works of the PTF was very evident.

It is particularly perturbing that despite the number one citizen of the country doubles as the Minister of Petroleum Resources, having served in that capacity before, the country is still experiencing protracted fuel shortage. Despite coming into the job with such a prodigious amount of experience and track record of performance in the sector , based on observation, the Nigeria’s economy which  is heavily dependent on crude oil has been at risk due to massive and chronic oil thefts and the recent, fall in crude oil prices; producing adverse effects on the economy and governance for the past few years in his leadership.

The first major fuel scarcity that was experienced during President Buhari’s administration was in December, 2015, which saw Nigerians spending nights at filling stations even during the festive period.

The Minster of Information and Culture, Lai Mohammed, had blamed the fuel scarcity and queues at filling stations on former administration, noting that Nigerians are paying for the sins they met on ground.

The question is what difference has it made thus far in since its six years in power?

Isn’t it a wonder to why Minister of Information and Culture, Mohammed, who blamed the previous administration for the first fuel scarcity under the Buhari administration find it is difficult to blame the Minister of Petroleum (President Buhari) for the current situation?

The fuel crisis has cost the economy billions of naira daily. Electricity that would have helped savage this situation is not there. Under his nose, the NNPC has become moribund, converted to a disconnected direction, with the nepotistic leadership looting all the money for 2023 agenda.

Our refineries have recorded a declination in production. In 2013, the former Minister of Petroleum Resources, Diezani Allison-Madueke, revealed that Nigerians were consuming about 40 million litres of petrol daily.

As of August 2015, the Port Harcourt and Warri refineries were producing a total of 5.4 million litres of petrol per day to supplement the need, according to the Nigerian National Petroleum Corporation but in January 2016, the NNPC announced the closure of two of its four refineries after targeted attacks by militants disrupted their operations and did not state when or whether the refineries would reopen.

However, the Buhari’s economic achievement as minister of petroleum in the oil sector cannot be erased. .A giant-sized jinx was broken recently when the Nigerian National Petroleum Corporation (NNPC) announced a first Net Profit in the 44-year history of the organization. Under President Muhammadu Buhari, who doubles as Minister for Petroleum Resources, the oil conglomerate announced a first-ever profit of N287 billion. Such had never happened before.

Controversies Over Fuel Subsidy : The politico-economy of fuel subsidy

Fuel subsidy has historically been a divisive issue in Nigeria, with statistics showing that Nigeria spent at least N10 trillion on fuel subsidy between 2006 and 2018. In the midst of reports that Nigeria projected to spend N750.81billion on petrol subsidy in 2020. Many Nigerians have argued that fuel subsidy benefits only the rich and the funds spent on petrol subsidy would be more appropriately applied to fixing Nigeria’s huge infrastructure deficit, as well as providing funding for medium, small and medium scale enterprises in Nigeria to benefit a wider spectrum of the society.

One of the most controversial policies introduced under Alison-Madueke was the government’s plan to remove state subsidies on fuel prices. Alison-Madueke supported the discontinuation of the subsidy “because it poses a huge financial burden on the government, disproportionately benefits the wealthy, [and] encourages inefficiency, corruption and diversion of scarce public resources away from investment in critical infrastructure.”

But on this suffice On fuel subsidy removal or non-removal,  there is need to strike the balance between political correctness and economic prudence.

How to be a Nigerian