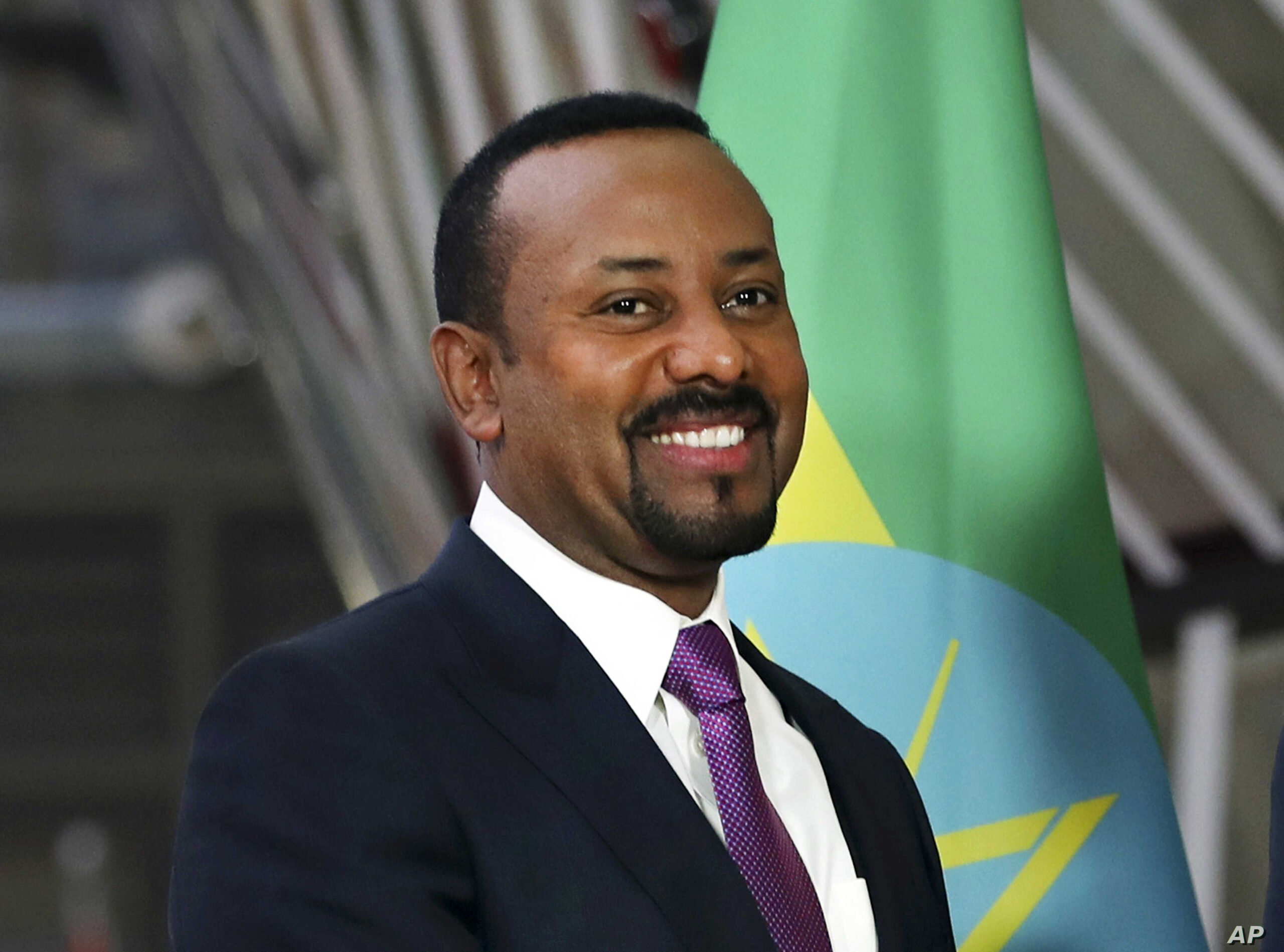 Abiy Ahmed, in full Abiy Ahmed Ali, born in August 15, 1976, Beshasha, Ethiopia),is an Ethiopian politician who became prime ministerof Ethopia  in 2018. He was awarded the Nobel Prize for Peace in 2019 for his efforts toward attaining peace and international cooperation, particularly for his work to end Ethiopia’s long-running border dispute with neighbouring Eritea.

Abiy Ahmed ignited domestic and international fanfare after
becoming, at the age of 42.In his second
year in office, he confronts several challenges – intractable
ethnic violence, slowing economic growth, the COVID-19
pandemic, and a looming constitutional crisis – which
threaten his prospects as leader ahead of elections likely to
occur in early 2021.

The transition from Hailemariam to Abiy was the most significant change in Ethiopia’s politics.

Abiy focused in 2018 and 2019 on regional diplomacy and on consolidating control over the political establishment in the national capital, Addis Ababa, forming the Prosperity Party from the rubble of the old governing coalition, the Ethiopian People’s Revolutionary Democratic Front (EPRDF).

In securing his position among allies, he neglected engagement with opposition parties – including the ousted Tigrayan elite – and his time in office has been marred by political volatility and deteriorating public security. Many fear that conditions will deteriorate further ahead of the next parliamentary elections, originally scheduled for August 2020
but delayed because of COVID-19, probably until early 2021.

Abiy’s reform agenda
Abiy’s immediate challenge in 2018 was to reorganise his fractious, four-party coalition in order to improve governance. He rose to power as a member of one of these parties, then known as the Oromo People’s Democratic Organization. In the years preceding 2018, the party had aligned itself with mass protests in the Oromia Region – Ethiopia’s most populous state and the ancestral home of the Oromo people – while tacitly (and sometimes openly) stoking ethnonationality sentiment there. These popular demonstrations and their slogan ‘Oromo First’ (as opposed to ‘Ethiopian First’) contributed to the souring of relations within the EPRDF governing coalition and aggravated tensions with other ethnic groups.

In July 2018, he signed a historic deal with Eritrean
President Isaias Afwerki, ending what was effectively a cold war between the countries following the violent 1998–2000 border conflict. Abiy won the Nobel Peace Prize for resolving the dispute, but critics pointed out that, by the time the award was presented in December 2019, progress towards normalising diplomatic and trade relations between the countries had stalled, or even gone into reverse.

By appointing several respected, independently minded figures to lead
governing institutions such as the supreme court and the electoral board, Abiy took serious action to create at least a measure of separation between party and state, which had fused under his predecessors Meles Zenawi (prime minister from 1995 to 2012) and Hailemariam. He also acted swiftly against the once dominant Tigray People’s Liberation Front (TPLF) within the EPRDF by removing officials from government posts, which further reduced the influence of the Tigrayan minority in governance. However, his hardline approach to these officials left a void in terms of bureaucratic continuity and hardened Tigrayan opposition to his government.
Abiy also implemented reforms to liberalise the economy. Although Ethiopia’s economy grew at an average of 7.8% per year in real, per capita terms over the last decade – faster growth than almost anywhere in the world, albeit from a low base – there were warning lights flashing from the moment Abiy took office. Growth was slowing modestly and public debt had climbed to 60% ofoffice. Growth was slowing modestly and public debt had climbed to 60% of GDP. Export revenues (derived chiefly from coffee) were critical to support the
EPRDF’s ambitious push towards industrialisation but had been stagnant for at least five years.

with the IMF, which had long been strained. At the same time, the government restarted talks to join the World Trade Organisation.

The initial surge of enthusiasm for Abiy both at home and abroad did little to slow or reverse the fragmentation of Ethiopia’s politics and governance, which predated his rise but accelerated after 2018. Rather than seeking unity in the interest of political stability and administrative continuity, Abiy moved aggressively against the party, removing TPLF leaders from federal institutions, including the armed forces and national intelligence service, while seeking to have some of them arrested.

Elsewhere in the country, violent conflict has become more frequent and more deadly. There were nearly three million internally displaced people in 2018, with 1.57m newly displaced that year, the highest anywhere in the world. Much of the fighting took place along Oromia’s borders with neighbouring regions and involved raids on land and resources by police, ethnic militias and ordinary civilians. Abiy’s administration has repeatedly blamed the TPLF forstirring unrest without providing strong evidence for the allegation.

In reality,
Ethiopia is driven by antagonistic ethnic nationalism embedded in the 1995
constitution, which gives 80 recognised ethnic groups significant sovereign
power. Each group has the right to a separate security apparatus, to form its
own regional state or to secede from Ethiopia altogether. All nine currently
constituted regions are expanding their special police forces competitively in a manner akin to an international arms race. The federal army, in part due to the removal of TPLF generals and perhaps some defections from the force, has weakened, and it is possible that it is now outnumbered by the combined regional special forces.
Abiy’s home region of Oromia has been most badly affected by internal division. In the far west and south, areas that are strongholds of Oromo nationalism and even secessionism, the prime minister has been treated with scepticism and occasional hostility. Members of the Oromo Liberation Front (OLF), a rebel group that returned from exile and made peace with the Ethiopian government in 2018, soon accused the Abiy administration of
betraying the Oromo cause. In October 2019, deadly protests in support of Jawar and against the prime minister swept through Oromia.
He has promoted his Prosperity Party, formed in late 2019, as a tonic to the morass of ethnic politics, uniting EPRDF’s four-party
ethnic coalition structure within a single organisation nominally representative of the whole country. The formation of the new party further alienated many Oromos, who see it as another move away from the ethnic autonomy they cherish, and a large portion of Abiy’s own party joined only reluctantly. Tigrayan opponents argue that medemer,the party’s guiding doctrine, is largely devoid of substance and may be a fig leaf over an emerging cult of personality.

The greatest risk to stability and progress until the end of 2021 would be if Abiy secures an electoral majority and, overestimating his own power, rushes headlong into re-drafting the constitution. Another is the state of the economy: the IMF had forecast per capita GDP growth to drop to 5.5% in 2020, but lowered its estimate in the last few weeks to 1.6% due to COVID-19. Ethiopia has not experienced growth this low for two decades.
‘With elections postponed until after the end of the
parliamentary term in October 2020, Ethiopia will be
entering uncharted constitutional territory while facing
once-in-a-generation economic turbulence.’

Since detection of the first case of COVID-19 on 13 March, the spread of the
virus appears to be limited.. According to projections, 28m people out of the population of 115m could become infected in a worst-case scenario. To avoid this, the government has implemented tough lockdown measures, including a ban on public gatherings of more than four people. On 8 April, the government declared a state of emergency for an initial five months. Tigrayan critics have called on the Prosperity Party to seek consensus by inviting members of the opposition, along with independent figures, into a transitional government that would address day-to-day governance, constitutional issues and national reconciliation. COVID-19, by shuffling the political timetable, presents an opportunity to test this proposal. However, while Abiy could face a full-blown
constitutional crisis if he does not consult opposition leaders during the
interregnum, it will probably take a greater crisis than COVID-19 for him to
give up power before facing the voters.