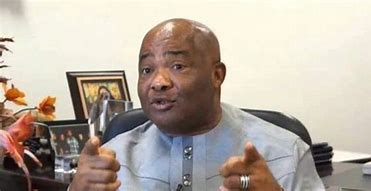 Many controversies swing around Hope Uzodinma, as the Executive Governor of Imo state who came into power barely on the 14 th of January 2020 has drawn the attention of Nigerians and the diaspora. leaving many with doubts, inspiring no confidence, expressing frail and disingenuous claims to mandate.

‘Is Uzodinma’s reputation engraved with questionable writings?’ Is he fit for purpose? ‘Does he understand his handicaps?

IS THE GOVERNOR OF QUESTIONABLE CHARACTER

Hope Uzodinma, the 75-year-old politician alongside Placid Njoku were sworn in on 15 January 2020, as the Governor and Deputy Governor of Imo State respectively.

Prior to the supreme court judgment in his favour there has been doubts over the possibilities of Uzodinma  making a good governor because of the misconceptions and calumny being peddle by fifth columnists.

It is no doubt a federal court sitting in Abuja had recently dismissed a suit seeking to nullify the election of Hope Uzodinma owing to report that the incumbent governor could not meet up to the constitutional requirement to be declared the governor.

Recall that in 2015, Hope Uzodinma of the All-Progressive Council had been arrested for thumb-printing ballot paper at a private residence during the gubernatorial election rerun in the local Government Area of Imo state.

In November 2018, was arrested, but later denied being arrested, saying it was an attempt to stop his campaign as a governor

During the rerun, the government was marred by violence and irregularities.

Shortly before the governor’s assumption to office, a discovery and uncovering of an alleged missing $12 Million contract funds was contained in an audit report.

He was accused of complicity in alleged $12 Million contract fraud along side a travel ban imposed on the governor, although It still remains unclear , if the governors travel ban has been lifted.

Can this economic sabotage be erased?

Apart from the case being handled by the office of the AGF, the governor had a case with the Economic and Financial Crime Commission.

The court had on September 18, 2018, ordered the arrest of the senator following his refusal to honour that he issued the dud cheque but was left untouched prior to his immunity.

He was also dragged before Justice Babatunde Quadri of the Federal High Court for non-disclosure assets.

One of the Charges read:

“ that you, senator Hope Uzodinma(male) on or about March 5, 2018, being a public officer with the National assembly Abuja, within the jurisdiction of this honourable court, committed an offence to which you refused to declare your assets without reasonable excuse upon notice to declare assets before the Special Presidential Investigation Panel for the recovery of Public Property, Abuja, contrary to and punishable under section3(3)(1)(a) of the Recovery of Public Property(Special Provision)Act 2004”

Following a statement by his predecessor  Rochas Okorocha

To cushion the effects of these writings on his reputation and governance, might ‘the end justify the means’

Can he yet inspire confidence and Genuity to mandate?