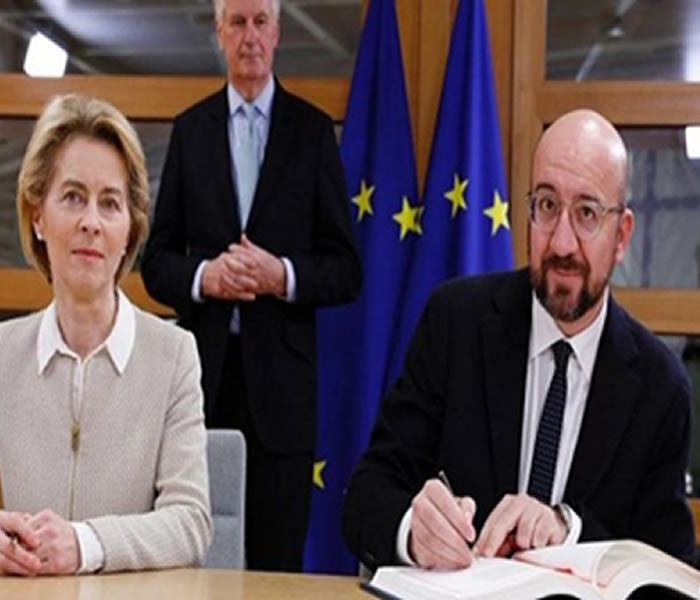 The Britain/EU Withdrawal Agreement Document signed across the channel.

Earlier on Friday, the document crossed the channel on a Eurostar train, having been signed in Brussels by the European Council’s president Charles Michel and the European Commission president Ursula von der Leyen.

Mr Michel, the former Belgian Prime Minister who chairs EU summits, said in a tweet: “Things will inevitably change but our friendship will remain. We start a new chapter as partners and allies.”

The prime minister hailed a “fantastic moment” for the country after he put his name to the historic agreement, which paves the way for the UK’s exit from the European Union next Friday.

It was witnessed by EU and Foreign Office officials, including the PM’s Chief Negotiator David Frost, and Downing Street staff.

“The signing is a fantastic moment, which finally delivers the result of the 2016 referendum and brings to an end far too many years of argument and division,” Mr Johnson said.

“We can now move forward as one country – with a government focused upon delivering better public services, greater opportunity and unleashing the potential of every corner of our brilliant UK, while building a strong new relationship with the EU as friends and sovereign equals.”

The signing of the final withdrawal agreement follows the Queen’s grant of a royal assent to the withdrawal agreement legislation for Boris Johnson Brexit deal on Thursday. Next the European parliament is expected to vote to ratify the agreement on the 29th of Jan, ahead of Britain’s departure from the EU on the 31st of Jan 2020. This would mark the beginning of an 11 months transition period, during which the UK would continue to follow EU rules, until the final break-away from the EU by December 2020.

The UK will keep a copy of the agreement while the original will return to Brussels, where it will be stored in an archive along with other historic international agreements.