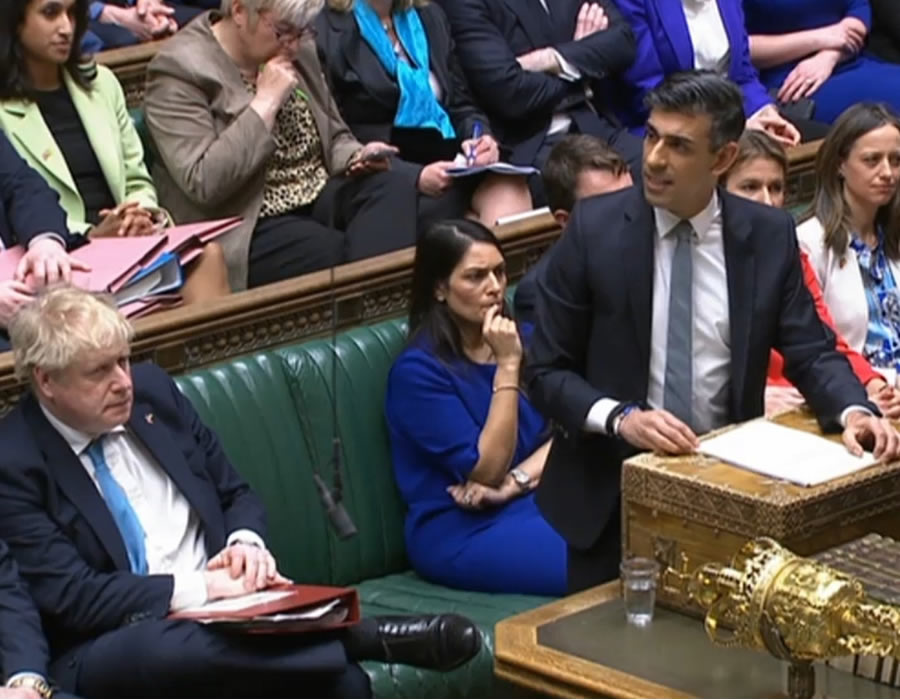 Chancellor pledges to cut the basic rate of income tax from 20 pence in the pound to 19 before the end of the current Parliament, in 2024.

Rishi Sunak has announced cuts to income tax and national insurance payouts as he unveiled his new cost-of-living plan to the House of Commons.

He also announced large tax cuts for workers, making changes to national insurance contributions from July and pledging to cut income tax by May 2024.

The main policy announcements that Mr Sunak set out are:

One of the biggest policy announcements was increasing the national insurance threshold from £9,500 to £12,570 from this July, which he branded “the largest single personal tax cut in a decade”.

He added: “That’s a £6bn personal tax cut for 30 million people across the United Kingdom. A tax cut for employees worth over £330 a year.

“The largest increase in a basic rate threshold – ever. And the largest single personal tax cut in a decade.”

The announcement was met with loud cheers from within the Chamber, as MPs have piled pressure on the Chancellor to alleviate the impact of the 1.25 percentage point rise in national insurance that comes into effect from 1 April.

However shadow Chancellor Rachel Reeves criticised Mr Sunak for not scrapping the increase in the levy altogether.

Mr Sunak also made a further significant tax pledge, telling MPs he would cut the basic rate of income tax from 20 pence in the pound to 19 before the end of the current Parliament, in 2024. It will be the first time in 16 years the basic rate has been cut.

Mr Sunak said: “A tax cut for workers, for pensioners, for savers – £5bn tax cut for over 30 million people. Let me be clear with the House: It is fully costed and fully paid for in the plans announced today.”

But the Chancellor did not flesh out the details and failed to give any timings for the tax change. Critics have suggested it is a cleverly thought-out election ploy, and could come into effect just ahead of the next general election.

Tim Walford-Fitzgerald, partner at accountancy firm HW Fisher said: “Dropping the one penny from the basic rate of income tax is a tactical and political move from the Chancellor.

“Assuming it comes into effect from April 2024, the first payslip you will see this in will arrive at the same time as election leaflets ahead of the next planned general election in May 2024 – a coincidence, or a well-planned strategy?”

Paul Johnson, director of the Institute for Fiscal Studies (IFS), said cutting income tax would benefit pensioners at the expense of workers.

He wrote on Twitter: “What is the possible justification for cutting income tax rate while raising NI rate? Drives further wedge between taxation of unearned income and earned income.

“Yet again benefits pensioners and those living off rents at expense of workers.”

Mr Sunak kicked off his Spring Statement by announcing three measures that will take immediate effect, including the highly anticipated cut to fuel duty.

Fuel duty will be cut by 5p a litre, he said, “the biggest cut to all fuel duty rates ever”. The reduction will be in place for a full 12 months, effective from 6pm tonight.

He said the levy was due to an EU law and “thanks to Brexit” the Government was able to ditch it, and will do so for the next five years.

“We’ll also reverse the EU’s decision to take wind and water turbines out of scope and zero rate them as well,” the Chancellor told MPs. “And we’ll abolish all the red tape imposed by the EU.

“A family having a solar panel installed will see tax savings worth over £1,000 and savings on their energy bill of over £300 per year.”

The third support measure outlined by Mr Sunak included doubling the Household Support Fund to £1bn. “Local authorities are best placed to help those in need in their local areas,” he said, and the money will be available from April.

Immediately afterwards, the Chancellor was heckled by Labour’s Jonathan Ashworth, who shouted: “Is that it?”

“He’s utterly out of touch as to how devastating this cost of living crisis.”

How will the national insurance change affect workers?

From July, the threshold people have to start paying national insurance will increase by £3,000.

It means anyone earning under £12,570 will not have to pay any national insurance.

Mr Sunak focused the statement heavily on “security” and spoke at length on the Ukraine war. “We should be prepared for economy and public finances to worsen potentially significantly” as a result of Ukraine and cost of borrowing to continue to go up, he warned.

“We will confront this challenge to our values not just in the arms and resources we send to Ukraine,” Mr Sunak told MPs. “But in strengthening our economy here at home. So when I talk about security, yes – I mean responding to the war in Ukraine.

“But I also mean the security of a faster growing economy. The security of more resilient public finances. And security for working families as we help with the cost of living.”

He warned, however, that sanctions on Russia “of unprecedented scale and scope” would have an impact on the economy, saying they “are not cost-free for us at home” and were “a risk to our recovery”.

MPs, businesses and the public have been eagerly awaiting what measures the Chancellor would announce to help people with the soaring cost of living.

With war raging in Ukraine, the economy still reeling from the impact of the pandemic, and energy bills soaring, the Chancellor was under significant pressure to ease the burden on UK households.

The policies announced today are likely to determine whether Britons will be able to stay afloat and manage their rising living costs in the coming months.