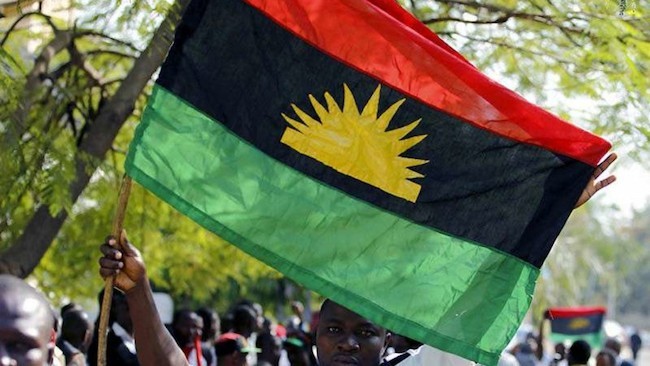 The Indigenous People of Biafra (IPOB) has asked the south-west and middle belt to join in the one-month sit-at-home campaign if the federal government fails to produce its leader, Nnamdi Kanu, in court on October 21.

The group stated that the sit-at-home would be a show of solidarity for Kanu, who is presently been held in the Department of State Services (DSS) custody.

According to a statement by the group’s spokesman, Emma Powerful, which was released on Sunday the group also called on Igbo businessmen and women outside the south-east to shut down their businesses in support of Kanu.

“Following our earlier declaration of one-month lockdown of Biafra land should the Nigeria Government fail to bring our Leader Mazi Nnamdi Kanu to the court on October 21,” the statement reads.

“We, the global family of the Indigenous People of Biafra (IPOB), request our brothers and sisters in Oduduwa Republic and Middle Belt including Igbo and Biafra businessmen and women, traders, who is doing business outside Biafra land to shut down his or her business for us to demonstrate our resolve for the emergence of our new nation Biafra and support for our leader Mazi Nnamdi KANU and others who are facing similar fate with us to join us in sympathy protest.

“All lovers of Biafra including Christian communities in the north and other parts of Nigeria, who receive unnecessary humiliation, intimidation and killings from Fulani terrorists, bandits and murderous herdsmen should understand that time has come for all victims of Fulani impunity and atrocities to unite together for resistance.

“We advise all oppressed people in Nigeria to be prepared for the one-month sit-at-home if the federal government of Nigeria and the Department of State Services, DSS fails to produce Nnamdi Kanu in court on the next court adjourned date.

“Mazi Nnamdi Kanu is a freedom fighter demanding justice for the oppressed Indigenous people in Nigeria. He committed no crime to deserve his continued detention without trial.”

Nnamdi Kanu was arrested and extradited to Nigeria to face trial. He has since been held in the custody of DSS following his re-arraignment.

On July 26, Binta Nyako, judge of the federal high court, Abuja, adjourned the trial of Kanu till October 21, owing to the failure of the federal government to produce him in court.