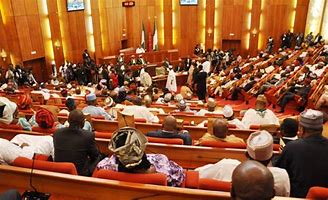 The Senate, yesterday, approved the sum of $16 billion, €1 billion and a grant of $125 million as foreign loans for President Muhammadu Buhari to fund his administration’s legacy projects.

The red chamber specifically approved the issuance of €500 million from the Bank of Industries and €750 million Eurobond in the International Capital Market. It asked the President to forward the terms and conditions of the loans from the funding agencies to the National Assembly.

The implication of Nigeria’s ever increasing debt service, however, is that the government is expending nearly all its revenue in servicing recurrent expenditure and debts, consequently causing the Federal Government to have recourse to foreign loans, and thereby further increasing the nation’s external debt profile.

The Federal Government had in July 2021, disclosed that it spent N1.8 trillion on debt servicing in the first five months of the year, representing about 98 per cent of the total revenue generated in the same period.

A total of N4.86 trillion was spent by the Federal Government between January and May 2021. While recurrent expenditure in the review period stood at N3.67 trillion, debt service was N1.8 trillion.

The Senate, yesterday gave approval following the consideration of the report of its Committee on Local and Foreign Debts, chaired by Senator Clifford Ordia.

While presenting the report, Ordia said the projects, which funds are requested for in the 2018-2020 borrowing plan, are ongoing.

“The projects will stimulate a rebirth of commercial and engineering activities and the consequent tax revenues payable to government as a result of these productive activities will increase.

“It will be recalled that the Senate at plenary in July 2021 approved financing for projects as recommended by the Committee. Subsequently, on September 15, 2021, the Senate President read another communication from the President containing an addendum to the 2018-2020 External Borrowing (Rolling) Plan in the sum of $4,054,476,863, €710,000,000 and Grant Component of $125,000,000 for various projects and same was also referred to the committee for further legislative action.

“The committee found that out of a sum of over $22.8 billion approved by the National Assembly under the 2016-2018 external borrowing rolling plan, only $2.8 billion, that is 10 per cent, has been disbursed to Nigeria,” Ordia said.

He said: “We went through the terms but there were some allegations that they were written in Chinese language and at that time it became clear even from the responses given by those who were in charge in the Budget Office; but they threw it back at us that we gave approval.”

HOWEVER, at a time when sovereign debts in poorest countries have surged to dangerously high levels, global and country-by-country systems for tracking it are proving to be inadequate. These gaps make it harder to assess debt sustainability and for over-indebted countries to restructure debt promptly and generate a durable economic recovery, according to a new World Bank report.

It finds that debt surveillance today depends on a patchwork of databases with different standards and definitions and different degrees of reliability, cobbled together by various organisations. Such inconsistencies lead to large variations in publicly available tallies of debt in low-income economies—the equivalent of as much as 30 per cent of a country’s GDP, in some instances.

“Improving debt transparency requires a sound public debt-management legal framework, integrated debt recording and management systems, and improvements in the global debt monitoring. International financial institutions, debtors, creditors, and other stakeholders, such as credit-rating agencies and civil society, all have a key role to play in fostering debt transparency.”

The study finds that 40 per cent of low-income countries have not published any data about their sovereign debt for more than two years—and that many of those that do publish it tend to limit the information to central government debt.

Many developing countries are relying increasingly on resource-backed loans—in which governments secure financing by putting up future revenue streams as collateral. Resource-backed loans accounted for nearly 10 per cent of new borrowing in Sub-Saharan Africa between 2004 and 2018. More than 15 countries have such debt, but none provide details on the collateral arrangements.

Furthermore, World Bank chief economist, Carmen Reinhart, has said existing systems for tracking the sovereign debts of the poorest countries are inadequate and mask hidden debts, as they are likely to owe far more than the record levels currently estimated.

The multilateral development bank, yesterday, released the first comprehensive assessment of global and national debt surveillance systems, saying it found ‘massive gaps’ in the ability to track how much each country owes – and to whom.

The World Bank, long critical of the lending practices of China, the world’s biggest creditor, last month said the debt burden of low-income countries rose 12 per cent to a record $860 billion in 2020, and called for comprehensive efforts to help low- and middle-income countries reach more sustainable debt levels.

She said the opaque nature of many debt contracts and the private sector’s complete failure to participate in a G20 debt relief initiative clouded the prospects for timely debt restructuring efforts for low- and middle-income countries.

Reinhart said her past research on China’s lending showed that official debt statistics captured about half of the actual debts, and fluctuating commodity prices and the continued impact of the COVID-19 pandemic could drive debt levels up further.

Possible interest rates hikes on the horizon in richer economies could exacerbate challenges for developing countries, she said, since they could siphon off investment and raise the already high cost of borrowing.

Debt service payments, related to exports, doubled to over 20 per cent in 2020, she said, reflecting the rising toll that increased borrowing is taking on the poorest countries.

MEANWHILE, the Federal Executive Council (FEC), yesterday, approved the 2011-2025 National Development Plan (NDP), which is a successor programme to the Economic Recovery and Growth Plan (ERGP). The plan has an investment size of N348.7 trillion to be contributed by the federal, state governments and the private sector.

Briefing newsmen after the meeting presided over by Vice President Yemi Osinbajo at the presidential villa, Abuja, the Minister of Finance, Budget and National Planning, Mrs Zainab Ahmed, explained that the plan is structured on economic growth and development, infrastructure, public administration, human capital development, social development and regional development.

She revealed that for the investment size, the public sector would contribute N49.7 trillion while the private sector will contribute N298.3 trillion.

According to her, the funding strategy includes broadening the tax base and expanding the capacity of the private sector through creating investment opportunities and delivering quality engagements and incentives.

Also speaking, the Minister of State for National Planning, Clement Agba, said in coming up with the NDP, the government took into consideration criticisms that trailed the NDP, including the fact that it was not inclusive enough.

THE governor of the Central Bank of Nigeria (CBN), Godwin Emefiele, yesterday, said the country’s external reserve would hit $42 billion mid-next year even as he expressed confidence in the continuous recovering of the economy. Emefiele said this at the France-Nigeria Security and Economic Summit holding in Paris.

The external reserve dropped to about $33 billion, the lowest in recent times, in the second quarter of the year as the economy struggled under the weight of COVID-19 impacts and other structural challenges. It has recovered remarkably with the gross figure hovering $41.8 billion.

Yesterday, the apex bank’s governor accepted that the economy had not fully emerged from the COVID-19 strain but noted that the country has seen the worst, as the future looks increasingly brighter.

“Nigeria’s external reserve is expected to surpass $42 billion by mid-2022. This is due to the sustained increase in crude oil price, the impact of Eurobond issuance, and the stable exchange rate condition,” Emefiele said.

He was optimistic of the continuous deceleration of the inflation rate. He expected the headline inﬂation to moderate to 15.35 per cent by December and 14.91 per cent by February 2022.

Stressing that “conﬁdence in the Nigerian business environment is growing”, the governor said overall business conﬁdence index is projected at 37.7 index points this month and 57.6 index points by mid-2022.

He listed InfraCo PLC establishment and eNaira as some of the catalysts of the next phase of growth. He said the digital currency, which was rollout recently, would improve on the monetary management framework.