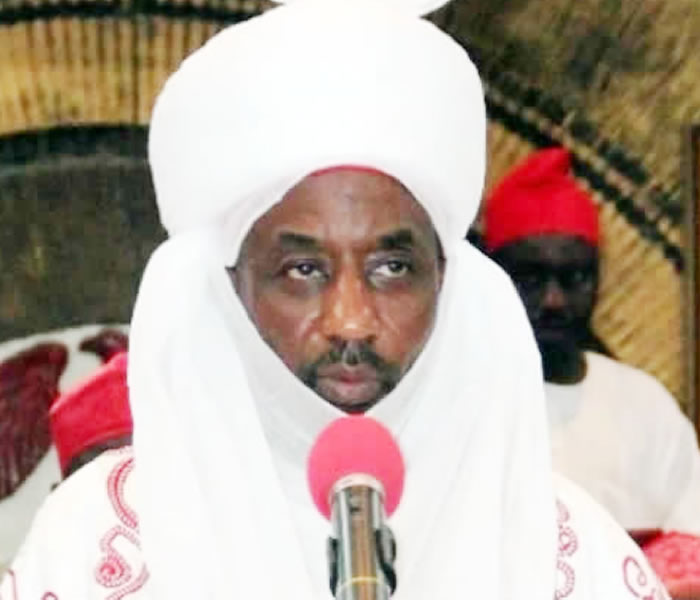 Yesterday, the Kano state government held an executive council meeting presided over by Governor Abdullahi Umar Ganduje. At the said meeting the Emir of Kano, Sanusi Lamido Sanusi was accused of having disrespected the Governor by not attending official meetings and displaying utter disdain for constituted authority.

And without giving the Emir any opportunity to react to the allegations the executive council tried him, found him guilty and announced his removal from the throne. Apart from deposing the Emir without affording him the opportunity to defend himself Governor Ganduje was the accuser, the prosecutor, witness and judge at the inquisition which lasted for about 5 minutes. At the end of the inquisition the accused was convicted and sentenced to dethronement. As if the reckless violations of the Emir’s right to fair hearing were not sufficient Governor Ganduje proceeded to order the indefinite restriction of the deposed Emir’s movement and indefinite detention at Loko, Nasarawa State.
Thus, the fundamental rights of Sanusi Lamido Sanusi to personal liberty and freedom of locomotion guaranteed by sections 35 and 41 of the Constitution of the Federal Republic of Nigeria 1999 as amended and article 6 and 12 of the African Charter on Human and People’s Rights (Ratification and Enforcement Act Cap A9, Laws of the Federation of Nigeria 2004 have also been violated. Since the Kano state government lacks the power to abrogate the fundamental rights of Sanusi Lamido Sanusi without following a procedure permitted by law his banishment and detention in Nasarawa State are illegal in every material particular.
At the time the British colonial regime engaged in the dethronement, banishment, restriction of movement and detention of traditional rulers who opposed the looting of the resources of the colonial territory of Nigeria the fundamental rights of all colonial subjects were not recognised in spite of the much touted Magna Carta. Hence, some of the traditional rulers who were deposed and banished to remote islands abroad where they were killed. The Britain colonial regime got away with such atrocities because colonial powers at the material time operated outside the ambit of law and civilised standards. But under the current democratic dispensation in Nigeria no state government has the power to remove a traditional ruler and subject him to banishment and detention without following due process.

In the case of Attorney General & Commissioner of Justice, Kebbi State vs. HRH Al- Mustapha Jokolo (2013) LPELR-22349 the Court of Appeal (per ADUMEIN, J.C.A.) held inter alia:
“The Governor of Kebbi State has no right to act outside the clear and unambiguous provisions of the Constitution of the Federal Republic of Nigeria, 1999 (applicable to this case). Section 35 (1) of the said Constitutionprovides that every citizen of Nigeria is “entitled to his personal liberty and no person shall be deprived of such liberty” except in the circumstances set out in subsections (a) to (f) thereof.Section 40 of the same Constitution provides that “every person is entitled to assemble freely and associate with other persons“. On the issue at hand, Section 41(1) of the Constitution is germane and it provides thus: ’41 – (1) Every citizen of Nigeria is entitled to move freely throughout Nigeria and to reside in any part thereof, and no citizen of Nigeria shall be expelled from Nigeria or refused entry thereto or exit therefrom. (2) Nothing in subsection (1) of this section shall invalidate any law that is reasonably justifiable in a democratic society – (a) imposing restrictions on the residence or movement of any person who has committed or is reasonable suspected to have committed a criminal offence in order to prevent him from leaving Nigeria; or (b) providing for the removal of any person from Nigeria to any other country to – (i) be tried outside Nigeria for any criminal offence, or (ii) undergo imprisonment outside Nigeria in execution of the sentence of a court of law in respect of a criminal offence of which he has been found guilty: Provided that there is reciprocal agreement between Nigerian and such other country in relation to such matter. The appellant has not been able to show that the banishment of the 1st respondent from Gwandu Emirate in Kebbi State and his deportation to Obi in Nasarawa State were in accordance with the clear provisions of Section 41 of the Constitution of the Federal Republic of Nigeria, 1999. The banishment and deportation from Kebbi State by the Governor of Kebbi State, on or about the 3rd of June, 2005 of the 1st respondent to Lafia in Nasarawa State and later to Obi, also in Nasarawa State, is most unconstitutional, and illegal. By the said banishment and deportation, the 1st respondent has been, unduly and wrongfully denied his constitutional rights ‘to respect for the dignity of his person’; ‘to assemble freely and associate other persons’ – including the people of Gwandu Emirate of Kebbi State; and to ‘move freely throughout Nigeria and to reside in any part thereof’ as respectively provided in the Constitution of the Federal Republic of Nigeria, 1999.”
Therefore, the Kano State Government should release Sanusi forthwith and allow him to enjoy his fundamental rights to personal liberty and freedom of locomotion as well as the right to contest his removal from the Kano throne if he so desires.

BREAKING NEWS: OHANEZE NDIGBO, UK WELCOMES AND ACCEPTS GOVERNOR IFEANYI OKOWA AS THE SON OF IGBOLAND AT IFAC IN LONDON.