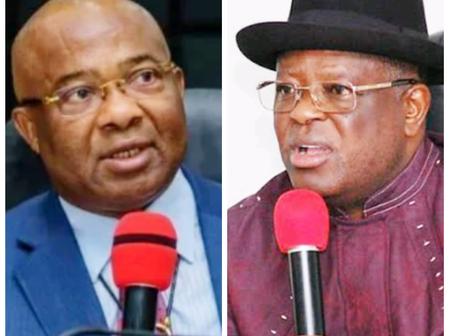 Governors Hope Uzodimma of Imo State and David Umahi of Ebonyi State as elected public office holders are the two principal entrants in the latest list of War and Humanity Crimes perpetrators in the ongoing genocidal military and police operations in Eastern Nigeria.

Governor Nyesom Wike of Rivers State did not make the present list but made it in the list of perpetrators involved in the Obigbo Army massacre and abductions of October/November 2020.

Though Abia State accounts for the second largest number of casualties and destroyed or burnt properties perpetrated by security forces, but Intersociety did not find sufficient evidence linking its Governor, Victor Ikpeazu to the conduct atrocities.Governor David Umahi is included for vicariously being in the know and encouraging the atrocity crimes by his policies and utterances especially in his capacity as the Chairman of the Southeast Governors Forum.

It must be placed on record that the controversial emergence of the Imo Governor following the January 2020 shameful judgment of the Supreme Court of Nigeria, is the root cause of the ongoing mayhem in the State which started in the middle of January 2021 and has escalated to eight others States of Abia, Rivers, Akwa Ibom, Cross River, Anambra, Ebonyi, Enugu and Delta.Since then, investigative evidence at our disposal has clearly shown that the Imo Governor has, by policies, conducts and utterances, inescapably aided and abetted the butcheries and property burning and destruction targeted at and unleashed on innocent and defenseless citizens of the State.

It is settled and beyond argumentation that “when crimes, especially those of grievous nature are perpetrated but not investigated, documented and archived with their perpetrators identified in writing, it is not only that no crimes have been committed in the eyes of criminal law and records but also failure to investigate, document and archive such heinous crimes technically set the perpetrators free for the rest of their lives and earn the status of repeat-offenders.

But when reverse is the case, the perpetrators become persona non gratae and liable in law, diplomatic and other noble social circles for the rest of their lives and life after death”.

By updated account of 17th June of our extensive investigations since late January 2021:

Safety Critical in the workplace, the United Kingdom Perspective.

THE ROLE OF TRIBALISM AND NEPOTISM IN NIGERIAN POLITICS