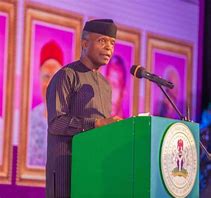 The Nigerian Ports Authority (NPA) has been directed by Vice President Yemi Osinbajo to review its charges on imported petrol.

Osinbajo gave the directive on Monday in Abuja at the fourth annual lecture and award presentation by ValueChain Magazine.

He stated that the order was consistent with President Muhammadu Buhari’s authorization for a downward review of port charges on imported petrol.

He also stated that the review would lead to a reduction in the pressure on the pump price of petrol in the country.

The Vice President who was represented at the event by the Minister of State for Petroleum Resources, Timipre Sylva, emphasized the importance of enhancing effective synergy between oil and gas and maritime sectors for greater value creation.

“You will agree with me that the maritime sector remains pivotal to the oil and gas sector in our country. The issues bordering around regulation 2014 has been brought to my notice, the implementation of regulation, especially this time the country is coming out of the global oil crisis,” he said.

Also speaking at the event, the Group Managing Director, Nigerian National Petroleum Corporation (NNPC), Mele Kyari, said available statistics showed that there were over 20,000 ships working for the oil and gas sector in Nigerian waters.

“There are over 20,000 ships working for the oil and gas in the Nigerian waters with an annual expenditure of over 600 million dollars in the upstream sector.

“The oil sector spent three billion dollars on marine vessels between 2014 and 2018 of which 73 percent was spent on crude boat, security and power supply intervention.

“This reflects the huge potential in the sector as we aspire to grow our production to three million barrels per day. Without doubt, the potential of the Nigeria blue economy is huge and remain largely untapped for the benefit of the country,” Kyari, who was represented by NNPC’s Chief Operating Officer (Gas and Power), Yusuf Usman, said.

N39.7bn for roads, erosion, incinerators’ contracts have been approved by the Federal Government