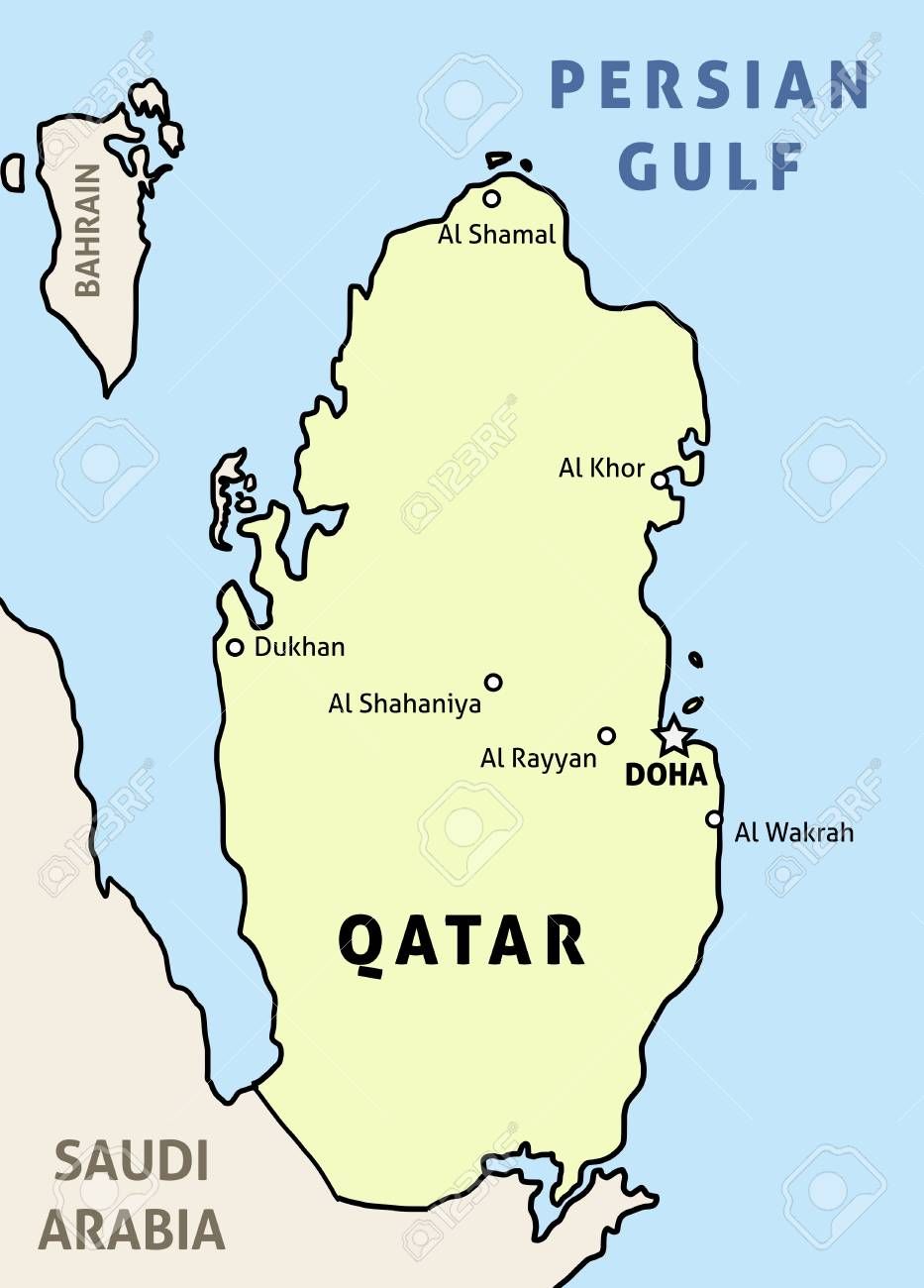 It has become necessary to pay attention to the media infighting and the attacks on Qatar as the 2022 FIFA World Cup tournament draws near. Aside from just paying attention, I followed closely with some personal investigation, vis-a-vis, a little background check of the historical diplomatic relationship between Qatar and the nations alleged to be fronting these attacks. Some of the findings from a critical and analytical interrogation are what was summed up in the title of this article; ‘intolerance of naysayers’.

To be honest to this reading public, before the 2022 FIFA World Cup hosting rights was awarded, to most persons, there seems not to be a clear difference between Qatar, the United Arab Emirates (UAE) and other GCC countries. This has made me, like millions of others, I believe, to be ignorant of the ‘little’ state, Qatar, and the giant strides they have made over the years.

To enlighten these classes of people, let me give a simple history of Qatar. This little nation, which today is only little by geographical space, gained her of independence as a self-governing state in 1971. That is, they will be marking their fifty (50) years independence this year, 2021. For the past fifty years, this nation had practised monarchy system of government, as against the popular democracy in the west and other parts of the world, Africa inclusive. It only shares a land border with Saudi Arabia, while her borders with other nations are sea borders. In the last fifty years, this nation had made remarkable progress, which made her suitable to be considered to host the entire world in one of the most popular games in the world.

When Qatar got their independence, some nations described it as a lockdown nation that is too isolated to make any tangible progress within the next century. Some classified it as a glorified clan that would beg to be merged with Saudi Arabia to prevent it from disintegration. Alas, that was not to be. Starting from the revolutionary days of Sheikh Hamad bin Khalifa to Sheikh Hamad bin Tamin, the nation has continued to make little steps towards acclimatizing with best practices around the globe, vis-à-vis, diplomatic relations, labour laws and migration policies. These strides that Qatar has made were without covert, tacit or open hindrance or undermining of her neighbours. Perhaps what is clear from the geopolitics of the region is that Qatar has not laid claim to any “big brother” or “rebel relations” actions as the world has clearly seen the United Arab Emirates and Saudi Arabia display to growing global concerns, especially with the later. Rather, the country has focused on charting her development within her sovereignty space, clear determination and a focused sense of mobilization. Qatar has focused on securing its territorial borders and peoples through strategic alliances with the United States of America and Turkey. These are NATO allies and countries bounded by a common code of security cooperation and coordination. Interestingly, Qatar’s neighbours and GCC co-members share a security affinity with Uncle Sam. What Saudi Arabia and the UAE frown at is the cooperation with Turkey. There is also the Saudi-UAE and the Sunni Islam world open enmity with Shia Islam Iran nation.

Qatar has refused to play the tolerance card with religion and refrained from hugging the “my friend’s enemy is my enemy” stance that notably Saudi Arabia and the UAE fly in terms of diplomatic relations with Iran. For charting a different and independent path, Qatar was slammed with a blockade wrapped as punishment for supporting terrorist organisations. Of course, the international diplomatic and intelligence communities know that this label coming from Saudi Arabia that is singlehandedly sponsoring an avoidable cataclysmic war in Yemen is beyond laughable. It is, therefore, not surprising that commonsense prevailed, though, with Qatar’s now well-known calmness and readiness to dialogue, the blockade has been lifted. Sadly, geopolitics shenanigans towards the tiny Gulf nation haven’t ceased. These shenanigans are being extended to Qatar’s preparations and hosting of the 2022 FIFA World Cup. From within the region and outside, especially by hired media and PR goons, the country is being labeled as a human and labour rights violator. Let’s be clear, the human and labour rights environment in the entire Gulf Cooperation Council (GCC) States and the majority of the Middle East territories are fraught with profound concerns. Based on comparison and scope, Qatar can be considered as the least Gulf nation with an egregious human and labour rights climate. The world has not forgotten that gender relations in Saudi Arabia are still at a medieval level to the extent that women are punished by public flogging if they dare to drive. The silencing of dissent and the state’s frown against citizens’ role in pursuing accountability underline the dastardly and conscienceless murder of Jamal Khashoggi.

Saudi Arabia is busy hosting world sporting events (Women Golf PGA tournament; Anthony Joshua vs Andy Ruiz rematch) without many eyebrows raised. No doubt, this smacks of double-standard and hypocrisy.Nevertheless, it must be stated that Qatar has not hidden behind a historical dysfunction human and labour rights climate. On the contrary, the nation accepted to work on her human and labour rights issues. It is also important to state here that Qatar being a small population nation of about 400,000 relies on the labour of migrants (numbering about 3.6million) to drive her economic development vision. It is also important to place in a context that the Kafala labour recruitment system and practice are commonly applied in the GCC states without an exception. Since winning the bid, in 2010, to host the 2022 FIFA World Cup, the country has relied on labour migrants to undertake its preparations. For the sake of clarity let me give some concise efforts made by Qatar in compliance with global best practice in the areas mentioned above.Given the global cry against the dehumanizing nature of the Kafala system and practice of labour recruitment, as it has been described as modern-day slave trade cum human trafficking, Qatar moved with speed to reform and abolish retrogressive and oppressive elements of the system. Some of these laudable reforms to the Kafala system include the removal of exit permit before a sponsored labour migrant can leave the country; removal of authorization that a sponsored labour migrant must obtain before changing job and employer; provision of redress mechanism in the case of rights’ infraction. Qatar becomes the first and only one to have introduced an anonymous complaint number where workers, most immigrants can report inhuman treatment whether labour related or not. And the state had been serious with addressing these complaints, thereby reducing the nightmares of immigrant in Qatar. Wage is central to employment and when the working environment is right, good pay can contribute to the dignity of labour, especially as the struggle to address the global distribution crisis that has left the majority in poverty and a tiny fraction in affluence.

It is on this note that organised labour across the globe appreciated and commended the effort of the Qatari government to increase the national minimum wage in that country. Aside from salary increase, the national minimum wage made it compulsory for employers of labour to make provisions for accommodation for their workers, mainly immigrants, or pay a stipulated amount enshrined in the constitution to the workers as accommodation allowance.

As a mark of genuine demonstration to these reforms and her readiness to ensure a transparent process necessary for the proper consolidation of the gains of the reforms, Qatar has opened her doors to the International Labour Organisation (ILO) to be domiciled in Doha. The ILO carry out their operations in the monitoring of the labour-related reforms and regulations in the country. It is, therefore, fair to ask -who would open his or her house to security operatives when he or she has contrabands inside? That gesture alone shows the sincerity of the leadership of the nation to ensure that they have a clean slate on the global stage when it comes to nations operating high labour standards. Secondly, they have made a policy that illegalizes construction workers to be made to work under the hot midday sun in Qatar, thereby enforcing that all construction work be carried out at night when the temperature is conducive for humans, especially immigrants not used to the hot weather. They went ahead to declare the minimum temperature above which workers should not be allowed to work in.Similarly, Qatar was among the first GCC nations to have taken their investments out of the Arab world to the West by investing in football clubs and promoting Qatar airways in western media. To date, there has not been any claim or allegation that these investments violate any ethical principles and norms, including labour rights. No doubt, these investments are aimed at advancing soft powers for the tiny nation, especially to boost her diplomacy and image, they have also been tools for outsiders to monitor performances on issues such as human and labour rights concerns. Aside from that, they have also engaged global monitoring organisations, governments constituted organisations and NGOs, and have worked on the reports of these organisations to ensure they don’t enter into any global blacklist; from Amnesty International, to the ILO, to UNESCO, amongst others. This is why these organisations are speaking up in favour of this little state, and not necessarily because they have been paid to do so as the naysayers are trying to make the public believe. So, one asks, again, why these attacks against Qatar on claims of human rights abuses when steady and promising steps have been made? Are the criticisms meant to undermine and destroy or to help and correct perceived shortcomings? If the latter is the case, then Qatar must be supported to continue to improve and not a desperate and naked attack to undermine her. Already, by all standards, Qatar has done well for herself.

I encourage all those following the media attack not to be persuaded by it but to carry out a personal investigation before taking a side. Good enough, the internet has made it a click away. This does not mean it is Eldorado yet in Qatar, far from it. There is still a lot to be done, as the room for improvement, they say, is the largest room in the world. Howbeit, as we push for improvement, we should not fail to commend the significant progress they have made. Work in progress is a continuum.

NoSkito! The Most Effective Mosquito Repellent