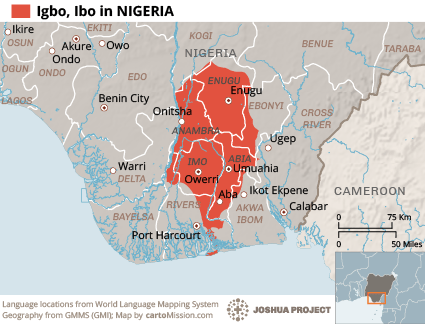 President Buhari did not refer to Igbo as a dog in a circle. But for those who think that is what he meant and are using it to mock Ndi Igbo, I beg to let you know that you are ignorant. I mean you need to know that to be a dot in a circle is a powerful thing. Because the dot in a circle is the centre of gravity; everything revolves around it.

In human history it has been the greatest symbol and entities that adopted it (that I will not mention here) are powerful world over. You need to understand it’s mythology. This simple symbol has many meanings, often spiritual.

The Stanford Solar Centersays the circle with a point is the common astrological and now astronomical symbol for the Sun, as well as the ancient alchemical symbol for gold, the perfect metal. This is because the sphere is a perfect shape, representing wholeness, oneness, unity and spirituality.

And in actual fact Igbo land is seating on the centre of the world. Check the equator. But assuming Nigeria were to divide along ethnic lines or Igbos are asked to go, let me help you make sense of that dot. Igbo land occupies an area of approximately 42,000 km2 of area or about 4.5 per cent of the total land area of Nigeria (about 930,000 km2).

All the nations listed above are today good countries to live in. Not to talk of Rwanda, Singapore, Netherlands and other countries that Igbo landmass are bigger than. They are all doing great. You get the point?

And let me help you further to properly understand Igbo land. It covers the entire Southeast “zone” as well as parts of Rivers (Igwuocha, Ekpeye, Ogba and Etche); Delta (Anioma); Akwa-Ibom(Ohaobu-Ndoki village), Benue( Ezza, Izzi, Ezzamgbo and perhaps Ulayi); Edo(Anioma related groups); Cross River (Isobo and Izii groups of Obubra) and Bayelsa( Osekwenike-Onyah axis). There are indigenous Igbo people in Benue and Kogi, there brothers and sisters will not allow them to suffer. Meaning that Igbo is in almost 13 states in Nigeria. As you have Yoruba in North Central so do you have Igbo in South South andNiger Delta. As you have Yoruba in Benin republic so you have Igbo in Benue and Kogi. What you call South South and Niger Delta is not an ethnic group. In South South and Niger Delta there are Igbos, Ijaw, Ibibio, Efik, Uhrobo, Itshekiri, Ogoni, Kalabari, Isoko, Esan and many others. Itshekiri from all indications is a Yoruba sub ethnic group. The Igbo language is a part of the Niger-Congo language family. It is divided into numerous regional dialects and somewhat mutually intelligible with the larger “Igboid” cluster. The Igbo homeland straddles the lower Niger River, east and south of the Edoid and Idomoid groups, and west of the Ibibioid (Cross River) cluster.

Again those who have buried their suffocating heads in crude oil should know that Igbo do not need anything from anybody. Igbo land is rich in natural and mineral resources including; crude oil, natural gas, coal, iron ore, gold, granite, limestone, silver ore, marble, sulphur/sulphide, gypsum, fluoride, uranium, barytes, kaolin, bentonite and clays, copper, phosphate, salt, glass sands and quartz.After Kogi and Nasarawa the next state with the highest deposit of natural resources in Nigeria is Ebonyi state.

After Ijaw ethnic group Igbo land has the largest deposit oil and gas, they are being currently exploited. Igbo is a palm oil belt and today a barrel of palm oil is costlier than a barrel of crude oil. Igbo can grow anything on their soil for food and agriculture.That is the dot in the circle called Nigeria.I am tempted to write this because since the agitation of Biafra went on overdrive, those opposed to the idea often remind the agitators that Igbo land does not have resources and will be unviable. They are now misconstruing President Buhari’s analogy of dot in a circle to mean that unimportant.

The idea of Biafra is not an Igbo one but somehow, the peculiar nature of Nigeria tends to project it in that direction. And secondly, even if we assume that Biafra is only Igbo land (which it was not), it will be a very rich nation.I hope you know what per capita income and poverty index per zone in Nigeria is? How about education, health and environment. And don’t talk about access to the sea, it is guaranteed if you were to ask Igbo to go.

But good enough that is not what President Buhari said. Except I didn’t hear him well.