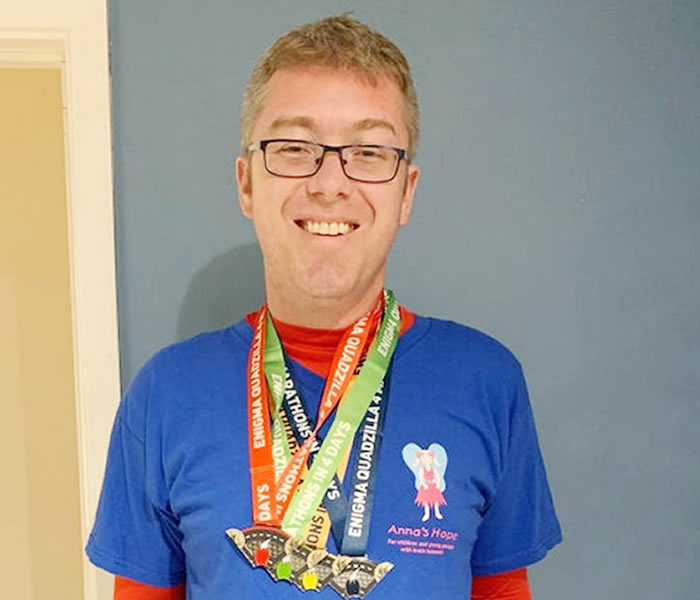 A councillor in Peterborough ran a staggering four marathons in four days in aid of a local children’s charity.

Cllr John Howard with his medals for completing the four marathons

John Howard, a Conservative representative for Hargate & Hempsted ward on Peterborough City Council, enjoys his running and was due to run the Perkins Great Eastern Run in October.

However, he was struck down by illness, while the event was postponed following a report to the police of a man acting suspiciously in Alexandra Road in the city’s North ward.

But this made John doubly determined to raise money for Anna’s Hope, a children’s brain tumour charity. So instead of running 13.1 miles he instead took on the Enigma Running Quadzilla challenge, running four marathons in four days around Caldecotte Lake, Milton Keynes.

And John managed to complete the challenge each day, accumulating 30 laps in a time of 25 hours 24 minutes.

John said: “As a father myself Anna’s Hope is a very special charity, helping children and young people diagnosed with a brain tumour.

“I was honoured that Anna’s mum Carole, co-founder of Anna’s Hope, came along to cheer me along on the first day.

“The final day was incredibly difficult as we had to run through Storm Ciara – conditions were truly awful!

“I have run marathons, but never more than one at a time, so to go to four in four days was an amazing experience and gave me the chance to complete a very unique challenge for Anna’s Hope.”

John has raised nearly £500 so far and was one of only 55 finishers to complete the challenge, earning four medals along the way.