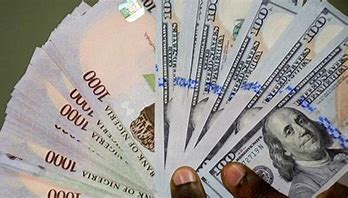 In 1981, one could get less than N6.1 million in exchange for $10 million. Then, a dollar was equivalent to 61 kobo. But four decades later, the naira has lost 99.8 per cent of its value against the greenback, going by how N4.1 billion now exchanges for $10 million. This is perhaps the steepest fall any currency has witnessed.

Managing a commodity currency anywhere in the world, comes with the challenge of a terminal ailment. Just when one thinks there is a breather, it breaks down. From the 1980s till date, the apex bank has experimented with all known currency management approaches while the naira wobbled against its peers even within the African sub-region. Each newly-adopted promise makes so much but delivers little or nothing.

The apex bank under the leadership of Prof. Charles Soludo, contemplated revaluation – a proposal that was meant to simply strike out two zeroes from a denomination to return the currency to its heydays. A 500 bill was to be revalued as N5, for instance. But like other policies, the proposal did not survive the many political intrigues that trailed its implementation. Probably, the Soludo solution is one of the few ideas Nigerians do not have the hindsight of. 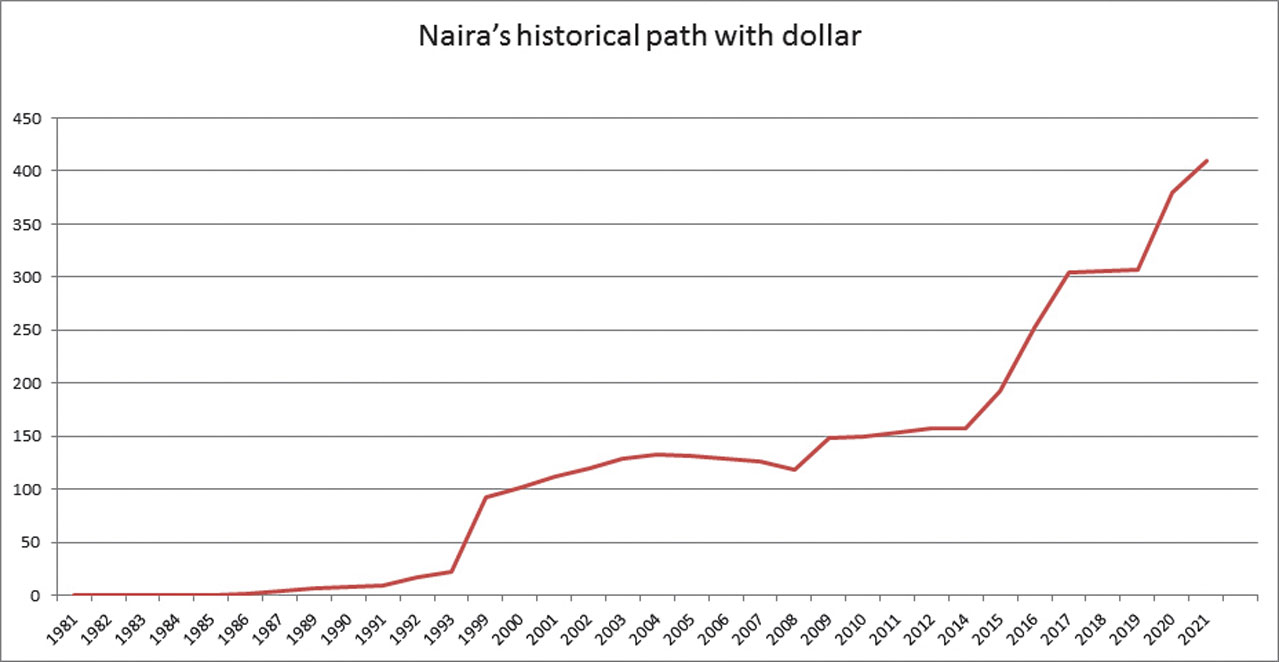 Many Nigerians have traced the historical trouble of the naira to the infamous Structural Adjustment Policy (SAP). Indeed, naira jumped from 89 kobo to a dollar in 1985 to N4/$ in the latter days of the SAP, which many experts have dismissed as ill-conceived.

The World Bank and the International Monetary Fund (IMF), as typical of them, demanded certain conditions among which was the adjustment of the exchange rate, to approve facilities for Nigeria. Since then, that currency has been on a roller coaster with several major liquidity crises in-between. In each crisis, a devaluation is put forward with an argument that a fair value would encourage the inflow of foreign capital, which an overvalued naira tends to scare away.

The argument has taken a firmer root in the foreign exchange debate in recent years than at any other time. When naira was adjusted to N193/$ in 2015, the decision was taken on the strength of expected massive capital importation. A year later, a similar thought was advanced in defence of another devaluation.

Last year’s devaluation decisions were also taken to attract the capital inflow required to shore up liquidity. Yet, the naira is considered overpriced, an argument that has been publicly echoed by the Vice President, Prof. Yemi Osinbajo.

Certainly, the strength of a currency is determined by interrelationship among certain factors including the demand and supply, the volume of exports in relation to imports and performance and competitiveness of the domestic economy.

It follows, thus, that a weaker currency is better for an economy that wants to be competitive in the international market. But if the naira has lost over 99 per cent of its value against the dollar in 40 years and it is still considered overvalued, at what price is its fair value going to emerge?

As much as Nigeria could also leverage the opportunity in expanding the foreign demand for its goods to create more jobs and increase local capacity, there is no debate about the fact that there are other entrenched challenges a weaker naira cannot address. If a dollar is exchanged for N5,000 tomorrow and other Africans flood Nigerian markets to grab the extremely cheap made-in-Nigeria products, the manufacturers can only sell the volume the many constraints permit them to produce.

Nigeria aspires for regional economic dominance – a position South Africa and Egypt are also jostling for. By the sheer size of its gross domestic product (GDP), and not by any qualitative measures, the country leads the continental economies, followed by South Africa and Egypt. But, interestingly, naira is among the weakest currencies on the continent. Among the top 10 economies, naira is only ahead of Angolan kwanza and Tanzanian Shilling in par value. An Egyptian Pound exchanges for N26 while the rand is even stronger at N28/R. Kenyan Shilling, Ghanaian Cedi. Ethiopian Birr, Moroccan Dirham and Algerian Dinar are also stronger than the naira.er.

But it was not so from the beginning; naira once commanded perception of strength and stability, which means it has consistently lost its value against its peers. While an economy earns an advantage in the marketplace when its currency is perceived cheap, the dollar is not allowed to swing, neither is news of a weaker dollar received with cheers. Even China has realised that it cannot lay claim to a regional leader with a weak currency. 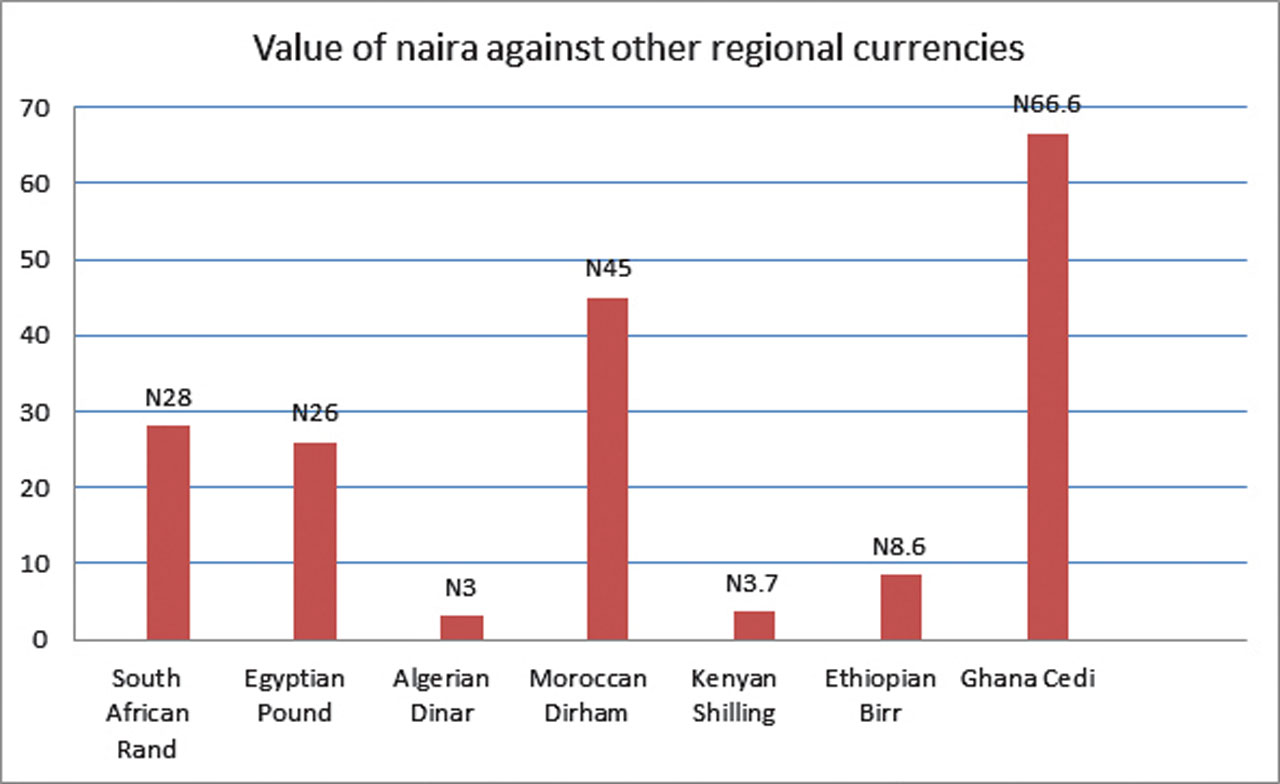 A weaker naira should attract more foreign investments and capital. But historical data does not support the inverse-correlation assumption. For instance, the naira has been on a free fall in the past two years, suggesting that it has been relatively cheaper. Yet, capital importation has not improved accordingly. Last year, capital importation tumbled by 60 per cent, falling from $24 billion recorded in 2019 to $9.7 billion. Of course, COVID-19 is a factor. But there are a few other African countries that either improved or suffered less slide even with perceived currencies.

Besides, Nigeria’s inflation, which is currently at 16.63 per cent, could worsen with currency devaluation. This, many have suggested, cripples local capacity, increases unemployment and raises the poverty rate. It is, thus, not far to fetch that the Vice President Prof Yemi Osinbajo devaluation suggestion is received with a pinch of salt.

Some experts suggest that an aggressive pursuit of foreign exchange liberalisation offers more hope than the continuation of administrative devaluation that has historically expanded the arbitrage between the official and parallel markets and increased the tendency to rent-seeking.

“My position is that the naira should be traded like any other commodity. Its value is in the market, for those buying and selling it. Artificial valuation by the CBN is not sustainable. The gradual devaluation we have seen is an unnecessary pain. There is value loss to the economy for not having a market rate for the naira. All those against letting the market value of the naira emerge are either benefitting from the situation or need more education on this subject. The crisis facing the naira is artificial; float the naira today, it will find its value in six months,” Victor Ogiemwonyi, a retired investment banker insists.

At the heart of the lingering currency crisis, according to David Adonri of High Cap Securities Limited, is a “primitive structure”, which has given room to allocative inefficiency in the system.

He said a transparent market-led mechanism is required to address the entrenched challenges. “For allocative efficiency to be restored wherein the naira can effortlessly find its true value, it must be allocated through a transparent market mechanism. Here, the CBN, government and private users of forex can buy and sell at open market rates. CBN can engage with exchanges to set up such platforms. To curb the inequities that the market can generate, fiscal policies can be used to control imports,” Adonri notes while commending Osinbajo for “his pragmatic insight”.