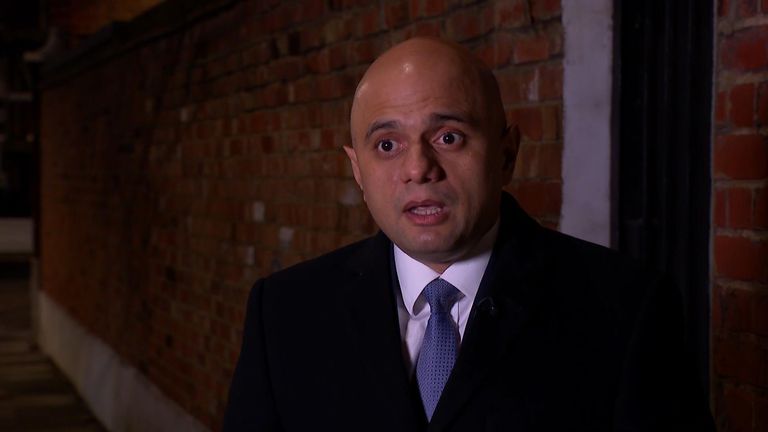 The health secretary acknowledges that the measures are “hugely unfortunate” for people who already had travel plans but insists they will be “temporary”.

All international arrivals to the UK will again be required to take pre-departure COVID-19 tests to tackle the spread of the new Omicron variant, the health secretary has announced.

The rule applies to all travellers over the age of 12 visiting the UK or returning from a holiday, regardless of vaccination status, and will come into force from 4am on Tuesday 7 December.

Tests must be taken a maximum of 48 hours before the departure time.

Sajid Javid said it was because of an “increasing number of cases linked to travel”.

In addition, Nigeria is being added to the travel red list – joining several southern African nations which were put on it after the Omicron Variant was first detected late last month.

It means that only UK citizens and residents will be able to enter the country from Nigeria, and they will have to pay to stay in a quarantine hotel for 10 days.

That change comes in from 4am on Monday, with Mr Javid saying Nigeria is “second only to South Africa for cases linked to Omicron”.

He added that there are “27 cases already in England and that’s growing”.

Overall, there are now 160 confirmed cases of omicron in the UK, with British scientists having suggested that it could have a “shorter incubation period” than other variants.

Mr Javid acknowledged that the measures are “hugely unfortunate” for people who already had travel plans, but insisted they would be “temporary”.

“We want to remove them as soon as we possibly can,” he added, saying that “vaccines remain our first line of defence”.

Travel rules are a matter for the devolved administrations, but measures introduced by Downing Street are usually replicated elsewhere, and Scotland quickly announced the same testing requirements.

Scotland’s Transport Secretary Michael Matheson said: “We have always said it may be necessary to quickly implement fresh measures to protect public health in Scotland, particularly with regards to international travel, and these restrictions are proportionate and necessary to that aim.”

Regarding the pre-departure test, Shadow Home Secretary Yvette Cooper tweeted: “Finally! But why on earth is this still only being brought in nearly TWO WEEKS AFTER Omicron was identified?”

Shadow Health Secretary Wes Streeting questioned why pre-departure tests are being allowed “up to 48 hours before flight?”.

Rapid changes to UK entry requirements have made it “impossible” for the travel industry to plan ahead, the CEO of Airlines UK said.

Tim Alderslade added: “It is premature to hit millions of passengers and industry before we see the full data.

“We don’t have the clinical evidence. The red list extension made complete sense – that’s what it’s there for – but we know from experience that blanket restrictions do not stop the importation of variants.”

The Airport Operators Association agreed, saying that pre-departure tests will be a “devastating blow for aviation and tourism”.

Chairman and CEO of British Airways Sean Doyle said the move was a “devastating blow”.

He said: “The blanket re-introduction of testing to enter the UK, on top of the current regime of isolation and PCR testing on arrival is completely out of step with the rest of the world, with every other country taking a measured approach based on the science.

The NHS has said more than one million people have booked an appointment for a booster jab this week after the public were urged to have the shot following the emergence of the new variant.

The speeding up of third jabs in England will happen no later than 13 December, bosses have said.

From that date, or earlier, the online booking system will be updated in order to allow people to book their booster jab three months after their second dose rather than six.