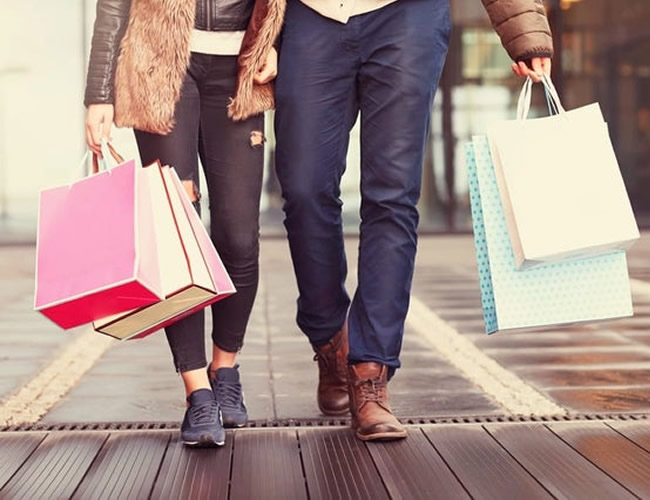 So, what can customers expect?

What shops are open?

Supermarkets, corner shops, banks, pharmacies and petrol stations stayed open during lockdown.
■ Can my boss force me to go back to work?

How will stores protect against coronavirus?

Shops which reopen must meet the government’s Covid-19 secure guidelines.
These include showing customers they are aware of safety measures, putting protective coverings on large items like beds or sofas, and frequent cleaning of regularly-touched surfaces.
Perspex screens at the tills and floor markings to keep shoppers 2m (6ft) are likely to be a regular fixture.

But some more unfamiliar measures – including pleas not to touch items unless you intend to buy – have been announced by some other shops.
For example, John Lewis will clean baskets after each use, and will not let customers use fitting rooms. Services such as personal styling, the bureau de change and food and drink outlets will be closed.
Marks & Spencer will also not be offering all of its services, such as its bra fitting service, for example.
■ What will a post-lockdown high street look like?
■ Jobs go as Debenhams shuts more stores
All the staff at Next will wear plastic visors, with the option to also wear masks if they want to.
Waterstones says it will quarantine books for 72 hours after people have touched them.

Can I shop with friends?

Stores have been asked to encourage people to shop alone.
Big retailers have been urged to talk to local authorities about providing extra parking and bike racks where possible, to stop people using public transport.
The number of customers in stores will be limited, while shopping centres have been told they are responsible for controlling queues in common areas outside stores.

When will hairdressers, cafes and pubs open?

In England, pubs, restaurants, hairdressers, hotels and cinemas will not be allowed to open their doors until 4 July at the earliest – and even then, only if they can meet social distancing measures.

What about the rest of the UK?
In Northern Ireland, all shops are now allowed to open.
In Scotland, smaller shops and outdoor markets will be allowed to reopen in phase two of its lockdown-easing plan. First Minister Nicola Sturgeon says it’s likely there will be more details on Thursday.
Wales’s Economy Minister Ken Skates says he would like to see non-essential shops reopen the week of 22 June if coronavirus cases continue to fall.
How busy has it been?
The British Retail Consortium (BRC) predicted that it may take time for customers to return to their old shopping habits.
It estimated that the lockdown has cost non-essential retailers £1.8bn a week in lost sales.

However, there were queues outside some Primark shops in London and Birmingham before their 08:00 BST opening times.

And the Birmingham branch opened its doors 35 minutes early to satisfy the demand.
■ Primark says no ‘special discounts’ at reopening .

Queues also formed outside shops such as TK Maxx and Foot Locker in the centre of Manchester.
With many people fearful for their jobs, now may not be the time to splurge on the High Street – but there may be bargains.
Clothing retailers went into lockdown just after stocking up with spring and summer ranges, which they now need to shift.