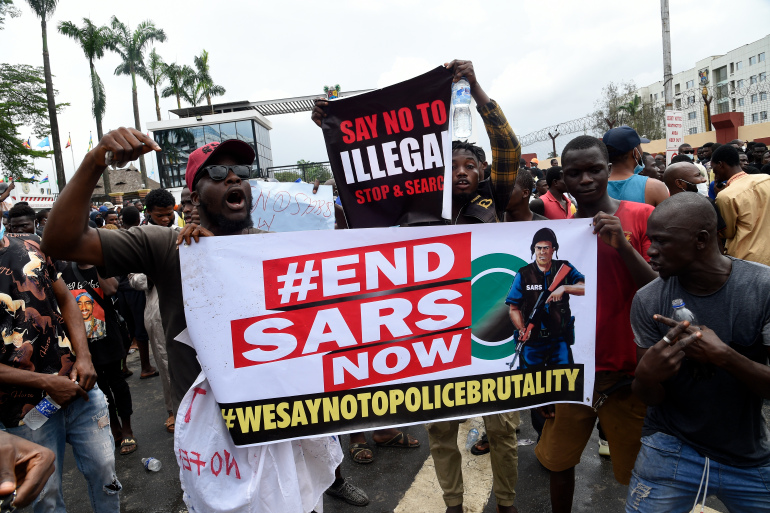 People carry placards in continuation of ongoing demonstrations to call for the scrapping of the controversial police unit at Ikeja, on October 9, 2020. - Nigeria's top police chief banned a controversial anti-robbery unit and other special agents from mounting roadblocks and carrying out stop-and-search operations over accusations of abuses. Inspector-General of Police Muhammed Adamu said the Federal Special Anti-Robbery Squad (FSARS) and other tactical squads must stop such operations "with immediate effect". Adamu said the decision followed findings that "a few personnel" in undercover tactical squads have abused their position "to perpetrate all forms of illegality". (Photo by PIUS UTOMI EKPEI / AFP)

The Nigerian youths have threatened to reopen the end SARS protest of 2020 which claimed a lot of Lives during the season of chaos at the Lekki Toll gate , Lagos.

Creating awareness on social media platforms,they have inscribed #RevolutionNow and #OccupyLekkiTollGate, with the matter trending as number one and three on Twitter.

Information on the posters showed that the protest is planned to start at 7 am on Saturday, February 13, 2020.Some of the posters have inscriptions such as “No justice, no reopening”, and “Occupy Lekki tollgate” among others.

The Lagos State Judicial Panel of Inquiry probing the alleged killing of #EndSARS protesters by soldiers at the Lekki tollgate had, on Saturday, approved the reopening of the tollgate.However, four out of the nine members of the panel faulted the report of the forensic experts hired to comb the scene for evidence.The four members who faulted the forensic report also rejected the application by the Lekki Concession Company, operator of the Lekki tollgate, to take possession of the facility, which had been shut down since the probe of the shootings started.The four members who rejected the forensic report are the two representatives of the civil society – Mr Ebun-Olu Adegboruwa (SAN) and Ms. Patience Udoh; as well as the two youth representatives on the panel – Rinu Oduala and Temitope Majekodunmi.

But the chairman of the panel, retired Justice Doris Okuwobi, and four other members of the panel Segun Awosanya (popularly known as Segalink), Oluwatoyin Odusanya (Director, Citizens Rights), DIG Taiwo Lakanu (retd.) (representing the police) and Lucas Koyejo (from the National Human Rights Commission) acceded to the reopening.

The youths have been advised to plan strategically before carrying out the protests as this can possibly lead to negative historical events.