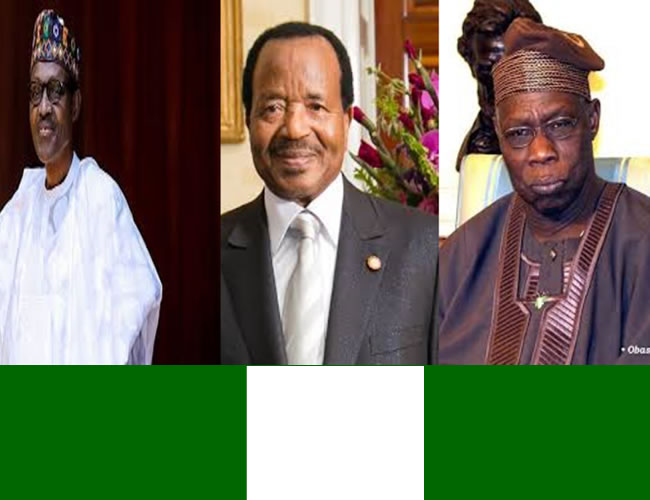 By July 10 this year, Nigeria may lose 24 local councils, by way of ceding, to a new country to be known as United Nations Organisation (UNO) State of Cameroon at its borders with la Republique du Cameroun.

The Guardian learnt that the withdrawal of his country’s soldiers by President Paul Biya from the southern part of the planned UNO State of Cameroon has set the stage for the creation of the new state being spearheaded by the UN.

The withdrawal of troops by Biya was formally demanded by the former President of the United Nations General Assembly, Ali A. Treki on May 20, 2020. This was disclosed in a May 26, 2020 letter of the UNO State of Cameroon to Prof. Martins Chia Ateh, the United Nations-appointed workshops coordinator in Cameroon and Nigeria.

Ateh said in the letter: “Greetings and thank you very much for the attached list of those who were detained in the Nkambe prison of Cameroon in August 2008.

“It is only now that the soldiers of la Republique du Cameroun are being withdrawn from the southern part of UNO State of Cameroon.” He said it was a good thing Treki kept the records straight.

On UN’s creation of a new country in Africa, Ateh said: “I should be getting back to you once the United Nations finishes with an official announcement on the existence of UNO State of Cameroon to the international community.”

It was learnt that Obasanjo and Biya signed the documents in March 2003 to cede their twin territories (Northern and Southern Cameroons) to the proposed UNO new country in West and Central Africa.

The UN, according to recent reports, pledged to actualize a new State of Cameroon on July 10, 2020.

Residents of Southern Cameroon were excited over the merger of their land with Northern Cameroon in Nigeria, comprising 24 local government areas in Borno (five), Adamawa (12) and Taraba (seven) states.

The Guardian learnt that the Southern Cameroon residents have since last year during their agitations to separate tagged the UNO State of Cameroon as “Ambazonia.”

“The state government will also be liaising with federal agencies on how to cede the affected local government areas as Obasanjo and Biya had signed documents with the UN to respect their international boundaries.”

It was learnt that before the announcement of the new state, the UN had kept Northern and Southern Cameroons under watch since Obasanjo and Biya signed the documents under the UN treaty.

Meanwhile, the Secretary-General of UN, Antonio Guterres has commenced the process of sensitization towards the July 10 date of creating the new state for the Anglophone separatists in Cameroon.

According to reports, Guterres has continuously reached out to the UNrepresentative in charge of the territories, Ateh to constantly organize sensitisation workshops on the brief history of the UNO State of Cameroon.

The UN is determined and constantly fingered as an interested party in the arrangement to actualize the new state.

The Nigerian government has been urged to carry out an investigation to establish the facts surrounding the ceding of 24 local government areas to create a new country.

According to Google Map, Nigeria, particularly in the Northeast region with a decade-long Boko Haram insurgency is sandwiched between its territory and Cameroon Republics, with Bakassi Peninsula and Lake Chad located south and northeast of the UNO State of Cameroon.

The new state will have a total landmass of 28, 214 square km with an estimated population of 20 million people. Last year’s 72-hour ultimatum given by the United States (U.S.) to Cameroon to withdraw its troops from la Republique du Cameroons was heeded by President Paul Biya last month.

Before the pullout, neither the U.S nor Cameroon had responded to the expiration date until Treki asked Biya to withdraw his troops.

The Speaker of the Cameroonian National Assembly, Cavage Yeguie Djibrilhad also asked the Cameroonian government to fully implement the new law on decentralization that seeks to grant greater power to local councils and regions.

Consequently, Biya signed the law on the promotion of official language in Cameroon, settlement law of the Republic of Cameroon for2020 financial year, last December.

The bill addresses the creation of assemblies of chiefs, regional assemblies and councils with each of the two territories having elected presidents, vice president, secretaries and public affairs management controllers.