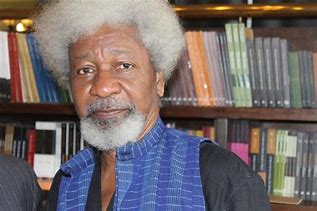 Nobel laureate, Wole Soyinka, has said that Nigeria is “in a mess” as he spoke on Thursday during a media briefing that took place at the Freedom Park in Lagos.

Soyinka called Nigerians to embrace unity to foster true development, noting that the Buhari-led administration appears to have no grasp of solutions to the country’s challenges.

“After all, look at Sudan right now; it’s in turmoil simply because some people got up one day and decided that an arrangement come into for the governance of that nation be abrogated because they’re carrying the guns.

“And of course, the people have responded in a marvelous, united way. Doctors, workers, students, market people and the last time, the oil workers, they’ve all got up and said ‘no’.

“Part of the problem which we have in this nation, and which has plagued us, except for a few memorable times, is this ability to act in concert.

“From time to time, we have a section of the nation come together and say ‘enough; we’re human beings; we will not be treated like beasts’.

“Like #EndSARS for instance, that’s one such movement. Unfortunately, it ended somewhat tragically. But it doesn’t matter; it was a step in the right direction.

“What I’m trying to say to you is this. If we’re still looking to this government for solution, then I think we really are lost.

“We’ve got to find a way of piling up pressure to enable us to meet as equal beings across the entire nation for a national indaba, involving the various professions, group interests, ethnic groups — any productive sector of this nation should be encouraged to come together and really debate the future of this nation.

“We’re going along piecemeal solutions all the time. One way or the other, one misses that sense of a grasp of the totality and understanding of the connection of one part of governance, one part of civic society to the others.”

While speaking on his latest book, ‘Chronicles from the Land of the Happiest People in the World’, he said people should read and “decide whether that title is justified or it’s meant to be ironic, and if it’s the latter, what really it is trying to say”.

He also lamented the “unnecessary” questions Nigerian travellers are expected to answer as part of the COVID protocol.

“When you go through this questionnaire — the thing you have to fill on your computer — you just wonder what it’s all about. Is it really about COVID prevention or is it to gather information on Nigerians in a covert way utilising the COVID requirements?” he asked

“It’s unnecessary. I’m not saying an attempt was made to banish me, but I felt like I was serving a decree of banishment, at least for 24 or 48 hours. That’s exactly how I felt. You know, you have to carry your bag as we’re about to enter the plane, then go all the way back, then you go through immigration again, to be let into France.”

When People Are Locked-Down, Hungry And Angry, By Sonny Iroche