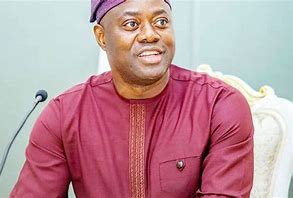 Governor of Oyo State and Secretary of the Peoples Democratic Party (PDP) National Convention Organising Committee, ‘Seyi Makinde, has declared that the October 30 and 31 dates for the party’s National Convention remained unchanged despite attempts by some individuals to scuttle the programme.

He maintained that the National Executive Committee of the party acted in good faith by fixing the convention for the said date and not to witch-hunt any individual or truncated anyone’s mandate as being insinuated.

Makinde, in a statement signed on behalf of the National Convention Organising Committee and made available to newsmen, said despite the action of some individuals to approach a Kaduna High Court in order to prevent the convention from holding, the party would not be distracted.

He charged members of the party across the country to ignore the antics of such individuals and focus on organising a national convention, which according to him, will prove to all Nigerians that the PDP remains the best option to rescue Nigeria.

He said: “The Peoples Democratic Party (PDP) National Convention Organising Committee (NCOC) is using this medium to alert members of our party and members of the public that we are aware of the actions of a few misguided PDP members who have approached the High Court in Kaduna in an attempt to prevent our great party, the PDP from holding its National Convention on October 30 and 31, 2021.

“Therefore, we call on all members and supporters of the PDP to ignore this distraction as we prepare to host a convention that will send a clear signal to Nigerians that the PDP is the only party that has the will and the might to rescue Nigeria from the catastrophe that we have been enduring for the past six years.”

According to Governor Makinde, some forces trying to divide the party were behind the latest attempts to stop the convention.
He urged PDP members to keep the faith, stating that the party is taking all necessary measures to ensure that its focus is not derailed, adding that the party will do everything possible to strengthen its structure and put in the efforts needed to unite the county and restore its glory.

“We are aware that a clearly united PDP is a threat to the forces that seek to divide us. Therefore, we urge our teeming supporters nationwide to keep the faith as we are taking all necessary measures to ensure that we will not be distracted from our goal.

“We are determined to strengthen our party structure and put in the work needed to unify and restore our great nation back on the path to economic prosperity and greatness.

“We therefore urge all party faithful to continue to rally support as we prepare to host our National Convention on October 30 and 31, 2021.”