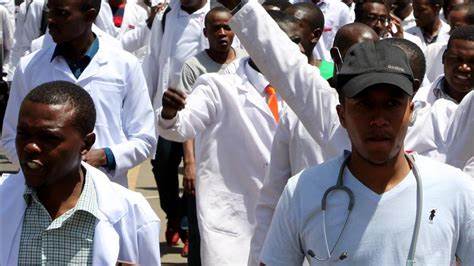 Having appealed against the National Industrial Court’s judgment ordering members to resume duties, the National Association of Resident Doctors (NARD) is sustaining its seven-week-old nationwide strike.

This is even as it would elect a new president this Friday at its ongoing Annual General Meeting (AGM) in Bauchi, Bauchi State.
In a telephone chat with The Guardian, yesterday, NARD President, Dr. Okhuaihesuyi Uyilawa, said: “We are in Bauchi for our AGM. I am going to hand over to a new president by Friday. The National Executive Committee is working very hard to ensure the success of the meeting. It is very likely that the new president will be from the zone holding the AGM.”

On the raging industrial action, he stated: “We have appealed (against) the judgment of the National Industrial Court that we should go back to work. We don’t have any date yet for the hearing, but we are optimistic that justice will be served. We are insisting that the Federal Government withdraws the ‘no work no play’ policy and the court cases against the association, as well as meet our basic demands.

When asked if government could hijack the election, he submitted: “No, No at all. We have processes that must be followed. The important thing is that resident doctors are gathered in Bauchi today (yesterday) for the AGM and a democratically elected president will emerge by Friday.”

With over 16,000 members, NARD on August 2, 2021 downed tools to demand implementation of agreements reached with the government on payment of owed salaries, hazard allowance, residency programme and life insurance benefits to families of members that died of COVID-19, among others.

HOWEVER, Minister of State for Health, Dr. Olorunnimbe Mamora, has appealed to the striking medics to suspend their action and return to the negotiating table for amicable resolution of the dispute.

In a telephone interview yesterday, in Abuja, he noted that it was inappropriate for the strike to continue when the country was battling COVID-19, cholera and other diseases, adding that doctors, by the ethics of their profession, were meant to reduce pains and save lives.

BESIDES, the health sector might completely shut down this week, as the Nigerian Medical Association (NMA), with over 44,000 practising/registered members and other affiliates, including the Medical and Dental Consultants Association of Nigeria (MDCAN), may join the ongoing strike.

The deadline expires today.
Also, the Alawe of Ilawe Ekiti, Oba Adebanji Ajibade Alabi, yesterday, sued for peaceful resolution of the crisis. He made the appeal during a stakeholders’ meeting to mobilise his subjects for COVID-19 vaccination at his palace in Ekiti State.

A visit at the weekend to some of the General Hospitals that serve as secondary referral centres in Ilorin, Offa and Omuaran, revealed lack of bed space for patients in dire need of admission.

The development could not be divorced from the inability of the managements to refer patients with chronic conditions to the University of Ilorin Teaching Hospital (UITH), Ilorin, the only tertiary health centre in the state with more space, better equipment and advanced medical personnel.